Tornadoes and the Myth of an Increase in Extreme Weather

A couple weeks ago, I had the opportunity to view the movie, Into the Storm.  From the summary of the flick, I thought it was about an Oklahoma town being hit by a tornado and how it changed everyone's lives.  That was a compelling story to me as I had lived through a tornado in 1974 that wrecked my hometown of Madison, Indiana, and certainly changed our lives.

Unfortunately the movie turned out to be nothing about a before and after picture of the tornado-ravaged community. Rather it was about a ridiculous scenario in which the town is hammered by three sets of tornadoes in just a few hours, including one mega tornado.  While the film did have impressive special effects, it was devoid of any realism regarding tornadoes.  That lack of realism though didn't prevent the film though from suggesting that the tornado disaster that had set upon the town was because of global warming/climate change, albeit never mentioning those terms probably because they would have been a box office turn-off.

I have already addressed the issue of hurricanes - that a 100 year study shows we're actually having fewer hurricanes.  But what about tornadoes?  Are we having more of them?  Have they become more extreme?  The answer is no and no.

This is from the National Climatic Data Center operated by the National Oceanic and Atmospheric Administration:


With increased National Doppler radar coverage, increasing population, and greater attention to tornado reporting, there has been an increase in the number of tornado reports over the past several decades. This can create a misleading appearance of an increasing trend in tornado frequency. To better understand the variability and trend in tornado frequency in the United States, the total number of EF-1 and stronger, as well as strong to violent tornadoes (EF-3 to EF-5 category on the Enhanced Fujita scale) can be analyzed. These tornadoes would have likely been reported even during the decades before Doppler radar use became widespread and practices resulted in increasing tornado reports. The bar charts below indicate there has been little trend in the frequency of the stronger tornadoes over the past 55 years. 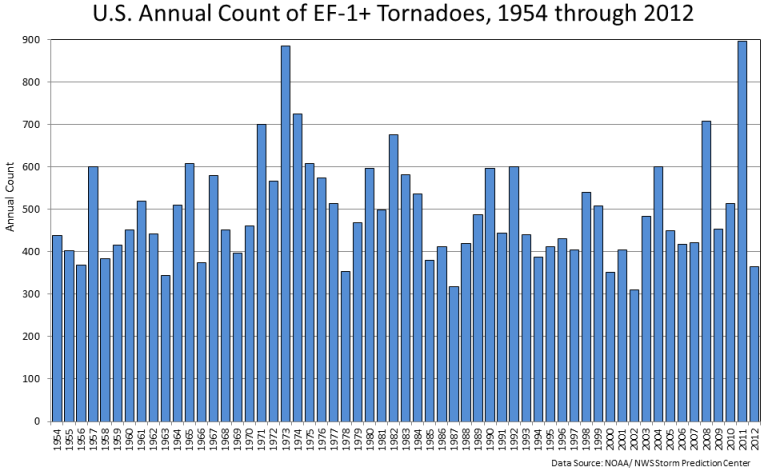 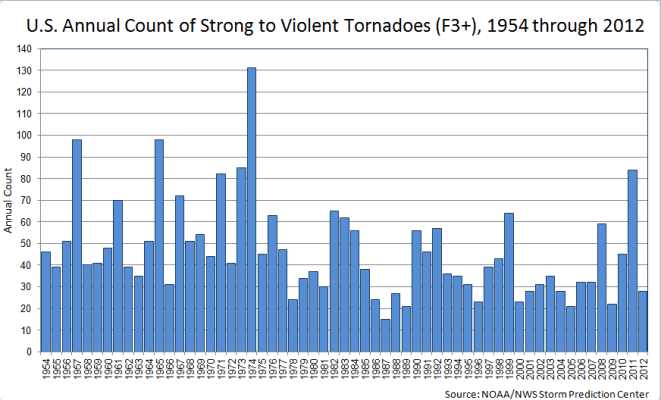 What I find surprising is that people who know the truth, i.e. that we're not having more extreme weather, continue to repeat the lie because it fits their political agenda.

Tuesday, May 21, 2013, Mythbuster: Hurricanes and Tornadoes are Not Increasing in Number or Frequency

Global warming is the new religion, as such facts need not apply.

Imagine you're dior replica James Bond, and you have to get into a secret laboratory gucci replica to disarm a deadly biological weapon and save the world. But first, you have rolex replica to get past the security system. It requires more than just a key or a password -- you need to have the villain's irises, his voice and the shape gucci replica of his hand to get inside.