In a county in which the Democratic Party has gained an increasingly large majority, one would think the Marion County Republican Party would be reaching out to be inclusive, and, at the very least, not turning on its own members.   But that would give the local GOP leadership too much credit.  In the latest dumb move by party leadership, Bryce Carpenter, the Executive Director of the Marion County GOP sent Jocelyn-Tandy Adande, an elected Republican Committeeman, refused to sell her a $100 ticket to the annual Reagan dinner:


Thank you and have a great day.

Jocelyn sent a reply via email that properly slammed Carpenter for the boneheaded move:

An Open Letter to Fellow Republicans

Don’t let Kyle Walker, Tom John, David Brooks and Bryce Carpenter fool you! As long as the Republican Party loses all of the local offices these RINOs can remain in power by design!

I am a true conservative just like former President Ronald Reagan who ran more than once for president, and did Nixon. I CAN WIN IN NOVEMBER!!!!

Yes, I volunteered to run for County Recorder in 2010, there was no candidate slated. This group sabotaged my race, sent out the same post card at the last minute, and allowed a white male democrat who voted in one Republican Primary run and be defeated in the 2010 General Election. The grass roots Republican supporters never met Ted Clements. He was not slated. Who picked him to run?

Time and time again these RHINOS have cost the Republican Party in Marion County all of the county offices except the office of mayor and a majority of the township offices.

Reason for the loss has been a weak precinct organization and a clear majority of "handpicked" appointed committeemen who have voted the will of the chairman at slating for these offices. Many of the candidates slated did not and could not win.

If Governor Pence had needed Marion County to win in 2012, he would have lost the governor's race!

Their poor record in Marion County indicates the margin of loss to Democrats by Republican candidates under their leadership. How can they be proud of their track record?  Yet, I am being attacked. I am not the County Chairman!

Numerous Vacant Township Board Positions and no candidates.

As a consultant, my resume reflects a number of candidates over the years I have worked for in both Political Parties. My support and participation in the Republican Party’s is based on the values in the Party’s Platform. In fact, my father, mother aunts and uncles were Republicans. Just like President Reagan, I am qualified, experienced and have the integrity to serve in each of the offices I have sought.

In March 2013, I was a candidate for Marion County Chairman of the Party against Kyle Walker who failed to give advance notice to the precinct committeemen that he had opposition for reelection. Yes, it was a stacked convention and later in a meeting with him informed me that if I ever ran for another office, he would guarantee that I would not be slated.

I did call county headquarters in November and requested a meeting with the County Chairman to discuss my candidacy for clerk.

I was informed by Bryce Carpenter that Kyle did not like me and he would have to check to see if he would grant me a meeting.

I told Bryce, “don’t bother, this is a courtesy call and that I would not be going through slating.” I was not willing to pay a large slating fee to the Party and get “screwed”. “Plus, they did not have a full slate of precinct committeemen to carry a slate countywide.” Look at past election results in the county and the results clearly indicate big losses to Democrats. 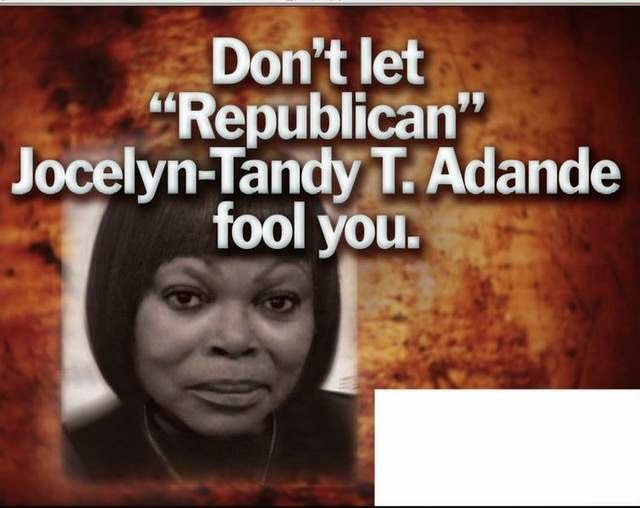 Over the weekend, I received a slick mail piece slamming Adande for having been a Democrat, with the last activity 15 years earlier.  The irony is that Reagan, who the Marion County GOP organization is celebrating with the dinner, used to be a Democrat before switching to the Republican party.

(Note:  I could not get my photographs of the mailer to download right, but I found these from 2011 on-line. They are identical to the 2014 slam piece with the exception that "Marion County Clerk" is substituted for "City-County Council at Large" on the second page and, of course, the ballot number is changed as well.) 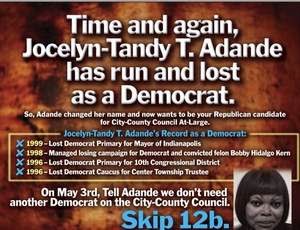 The anti-Adande piece appears to be employing an old trick of altering the candidate's photo to make him or her appear more sinister.  If my memory serves me correct, several years ago campaign strategist David Brooks altered a photo of Rep. Julia Carson and was skewered in the media for doing so.  In Adande's case her complexion appears to have been darkened to give her more of a sinister look.  They also altered my photograph on the negative mailing they sent out when I ran for judge in 2012.

It is outrageous that Marion County Chairman Kyle Walker is spending scarce money to defeat an unslated Clerk candidate in the primary when he has absolutely no intention of trying to win the Clerk's race in the Fall.  That is less resources Republicans have for winnable races in Marion County where they are competing against Democrats.
Posted by Paul K. Ogden at 10:08 PM

Well, I'm not running this election, Bill. Thanks though.

It is time this story is seeing the light of day. Thank you, Paul, for a public forum for the truth. And thank you, Jocelyn, for your tireless work in courageously standing up to a non-inclusive machine. They fear you because you are your own person and you stand on principle.

She will get my vote. Btw, how does one UN-register from the party???? Going independent, been voting that way for several years now.. Tired of the junk mail.

Southsider, being a member of a political party in Indiana is like staying at the Hotel California. You can check in but you can never leave.

Get out & vote in today's primary- there are several challengers to the disconnected establishment.