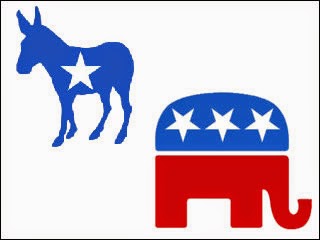 Over at Indy Democrat, Jon Easter has put together some political analysis of the council maps drawn by Republican political operative David Brooks.  Easter suggests that the maps hold opportunities for the Democrats to eek out a majority. Jon lays out his conclusion early on:


A quick cursory look and a nod to the fact that Marion County continues to grow more blue by the day makes me believe that the Republican effort to draw districts favorable to them will be thwarted...but only by a few seats.

For once in Jon's life, he's being a conservative.    The race for a council majority in 2015 won't even be close.

I agree with Jon that under the new map the Democrats start out with 10 absolutely solid Democratic districts.  By my count, the Republicans meanwhile have just four that are solid GOP distrricts (20, 23, 24 & 25), all in the southern part of the county.

That makes 11 competitive seats.  Under the maps drawn by David Brooks, he projects that all 11 of these competitive districts, which as the figures show below are all highly competitive, will be won by Republicans.  Below I have listed the districts. In parenthesis is the district councilor(s) currently living in the newly-drawn district.  (Thanks to Jon Easter for doing that work.)  The first number after that is the 2010 baseline Republican number used by Brooks to project a Republican win.  The second number is the 2012 baseline number for that district.

Of these 11 districts, the Democrats only have to win three to win a majority.  The 2012 baseline illustrates a huge drop off in the Republican vote in several of the districts from the 2010 to 2012 elections. 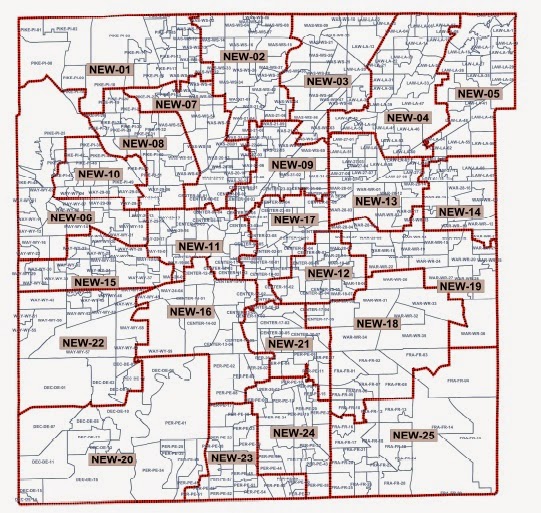 My use of 2012 baseline figures has been criticized because 2012, a presidential year, features a higher turnout, much higher than the municipal elections.  It is true that a higher turnout  in Marion County benefits Democrats and the 2010 mid-term turnout numbers will be closer to 2015 than will 2012.  .

But using 2010 election results to establish the baseline is not without criticism either.  First, 2010 is further removed from the 2015 municipal elections than 2012.  Marion County continues to rapidly lose Republican voters, which loss is going to be better reflected in the later 2012 numbers.

But there is an even bigger reason to question a 2010 baseline.  2010 was not a typical election year.  It was a huge Republican year as Democrats stayed away from the polls in droves.

Most likely the true baseline is somewhere between the 2010 and 2012 numbers.  That spells trouble for the Republicans.  Rather than pick up just two or three of those 11 districts, the more likely scenario is that the Democrats pick up five or six or more.  If the conservative five is chosen, the Democrats would enjoy a 15-10 majority. But the split after the 2015 elections could easily be 17-8 or 18-7.

To those who know about drawing maps for partisan advantage, Brooks fell into the classic pitfall of cutting the GOP districts too close to desperately try to create a majority.  (Frankly I'm not sure he had a choice considering how Democratic the county has become and where those few Republicans left actually live.)  As a result, there is no cushion in any of the districts.  Thus if the Democrats have a halfway decent municipal election, they pick up not a few seats but a whole slew of them.

What is this other than fascism (aka crony capitalism, corporatism, etc.)?

A few schools also provide houses as well as discussed flats that'll be open to prada outlet. These types of is going to be less within amounts compared to halls therefore will have to end up being set aside as soon as possible. They are additionally presently there in order to motivate existence abilities between your occupants as well as put together all of them for his or her life forward. Obtaining encounter is a great a part of understanding. When the college students possess finished a number of their own program these people might want to get free from college student cheap fake 2.55 chanel handbags sale. They'll possess a range of numerous locations to remain and when they require assist every college may have the lodging workplace exactly where they are able to request queries. Work may also supply info concerning personal home too. A summary of landlords which cope with college students is really a helpful checklist to possess. Within the locations exactly where large university's would be the college student lodging is actually diverse and also the option really cartier replica. Whenever somebody chooses to visit aside to review they ought to consider exactly where they would like to reside because this particular is among the most significant areas of their own life. When they tend to be pleased exactly where they're remaining after that it'll enhance their own very existence. Therefore, it is smart to strategy forward prior to the individuals appear. By doing this it'll be pleasant. Whenever young adults tend to be away in order to college or even hublot replica these people perhaps departing house, most of them with regard to the very first time. What this means is becoming by themselves and also have to maintain on their own. This really is really worth considering whenever considering college student lodging. Mother and father may also be fake watches exactly where their own kids is going to be residing and they'll require these phones end up being because secure as you possibly can.