Study Shows Ethanol Worse for the Environment than Regular Gasoline 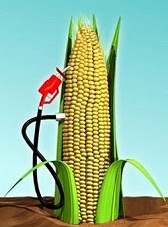 Biofuels made from the leftovers of harvested corn plants are worse than gasoline at creating heat-trapping gasses in the short term, a study claims, challenging the Obama administration's conclusions that they are a much cleaner oil alternative and will help combat climate change.

A $500,000 study paid for by the federal government and released Sunday in the peer-reviewed journal Nature Climate Change concludes that biofuels made with corn residue release 7 percent more greenhouse gases in the early years compared with conventional gasoline.

While biofuels are better in the long run, the study says they won't meet a standard set in a 2007 energy law to qualify as renewable fuel.

The conclusions deal a blow to what are known as cellulosic biofuels, which have received more than a billion dollars in federal support but have struggled to meet volume targets mandated by law. About half of the initial market in cellulosics is expected to be derived from corn residue.

About 40 percent of the nation's corn crop goes to produce biofuels, but biofuel production from corn residue has yet to be extensively commercialized.

Isn't it time we stop putting our food supply into our gas tanks?
Posted by Paul K. Ogden at 10:37 PM

Talk to someone who knows engines & performance. Burning food in irrational response to petro-phobia is so inefficient as to be stupid.

Let's just start a development company called "Crony Capital," it should attract all manner of "investment."

"Isn't it time we stop putting our food supply into our gas tanks?"

Now there's a non-sequitur if I've ever seen one. I thought we were talking about cellulosic ethanol here. By definition that is the INEDIBLE portion of the plant.