Is the Marion County Democratic Party Chairman Committing a Felony by Falsely Claiming He is Sending "Official Ballot" to Voters?

See below.  This is a mailing from Marion County Democratic Party Chairman Joel Miller. What apparently followed today was the claimed "official ballot" which excluded those candidates that Chairman Miller and his minions did not slate. 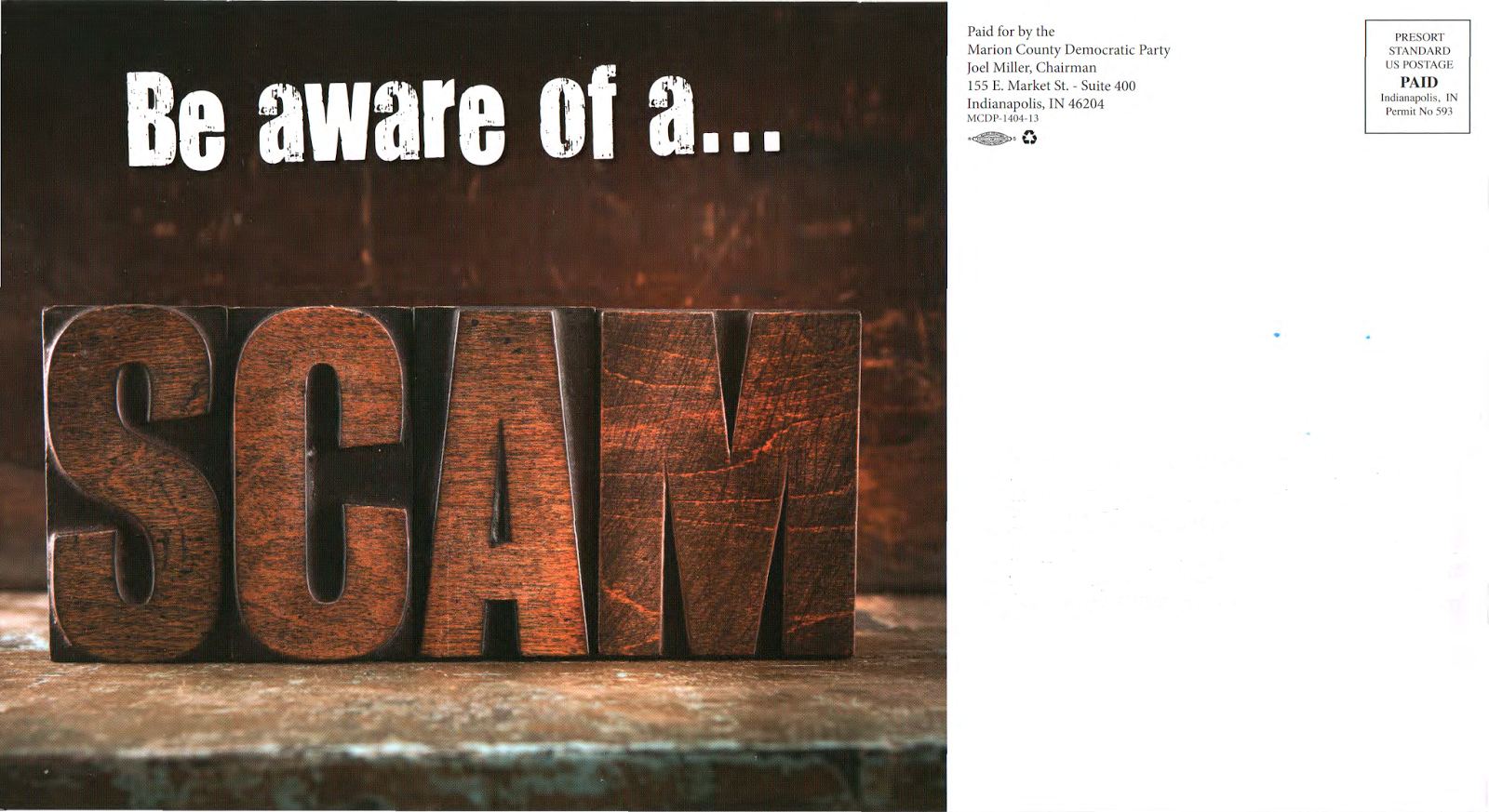 There are a number of false statements on the mailing. First, there is the claim that certain candidates "have not earned the support of the Democratic Party." The Democratic Party does not vote until next Tuesday, so that statement is obviously false. Slating is about the endorsement of the party organization and even that is not accurate as most of the people who vote at slating don't live in the precincts they purport to represent and most are appointed by the county chairman and not elected by the voters.  Then you have the absurd attempt to link the non-slated candidates to the "Tea Party." I am not aware of a single unslated Marion County Democratic candidate who has any links whatsoever to the Tea Party.  But the one area where Miller's mailing might constitute a very serious election offense, indeed a felony, is his assertion that he will be providing the voters with an "Official Marion County Democratic Sample Ballot."

The Clerk's Office produces official Marion County Democratic and Republican ballots. The official Democratic ballot has all candidates slated and unslated on it. While Indiana law allows Chairman Miller to produce a replica of that official ballot, the law most certainly does not say a candidate can alter it to remove unslated candidates and present it to voters as an "official ballot."  It appears that Chairman Miller has done exactly that, which appears to violate IC 3-14-2-19 which states:


(a) A person who knowingly:
(1) forges or falsely makes the official endorsement of a ballot; or
(2) prints or circulates an imitation ballot;
commits a Class D felony.

Subsection(b) of that statute refers to a couple statutes that provide exceptions, but neither appears to allow a county party chairman to falsely represent to voters that he is distributing an "Official Marion County Democratic Sample Ballot" when in fact he is doing nothing of the sort.

Ironically, the Marion County Election Board will soon be meeting to determine whether it should make a criminal referral of unslated Marion County Democratic candidate under IC 3-14-2-19 for passing out literature that had his name listed with President Obama and gubernatorial candidate John Gregg. In a 2012 election for the House, Mulholland had his literature seized by the Election Board s despite the fact that a decade earlier the Board had agreed that the Slating Statute was unconstitutional and that the Board would no longer enforce it.

Of course, the Election Board, which has two of its three members appointed by the Democratic and Republican county chairmen, are not about to enforce the law against the party bosses who can remove them from their position without cause.  The Board has an agenda to protect the corrupt slating process and it won't let things like federal courts and its orders interfere with that agenda.
Posted by Paul K. Ogden at 5:56 PM

Thanks for penning this. I got the postcard you show photos of in yesterday's mail and was repulsed.

I am waiting to see the 'official ballot'.

BTW I never got the so-called scam ballot he demonized. Did anyone?

Aside originating from providing providers using their items, very replica gucci handbags these kinds of producers will even possess a shop by which they display as well as market his / her items. The particular advantage including purchasing your personal taps directly with the producers is actually these items are often usually purchased having a significantly more inexpensive cost. Merchants may include concerning the worth pull subsequent these people obtain the products with the chanel outlet therefore you have to be able to spend much more when you obtain from their store. Nonetheless, the specific concern as well as purchasing instantly with the businesses is actually their own shop is really generally within warehouses to ensure suggests it is harder to find them all reduce. You will have to journey additional every single child find these types of suppliers nevertheless it's a reputable power considering the actual fake omega you are able to preserve simply by purchasing at their store instantly. After you have made a decision you want to obtain a destroy, whether it is the metal steel faucet, the birdwatcher faucet or perhaps a sensor-triggered just one, an individual must very first take a look at your own advertisements together with your close by paper marketers. An individual may well become able to be able to run into income fake watches using the suppliers. They'll may well continually be cleaning share as well as showing a brand new specific inexpensive simply right before in addition to following any kind of event. These types of would be the finest situations to acquire your own affordable cartier replica region faucets. The term including extreme caution when you're buying the actual taps available is actually that you need to examine thoroughly every single child ensure that you possess virtually no difficulties with the products.