The Real Enemy to Ending the War on Drugs

Some of my friends are working to end the failed War on Drugs.  I am sympathetic to their cause.  I believe that we as a society have paid a terrible price for treating drug use as a criminal rather than as a public health matter. This morning Sheila Kennedy writes about how Uruguay has taken a different approach:

Before the passage of the law, Uruguay’s president made an important point; admitting that legalization was an experiment, he stressed the importance of finding an alternative to the deadly and unsuccessful war on drugs. “We are asking the world to help us withThe effects of drug trafficking are worse than those of the drugs themselves.”
this experience, which will allow the adoption of a social and political experiment to face a serious problem–drug trafficking,” he said. “ 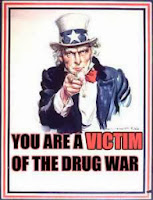 Yes. That is an “inconvenient truth” that everyone from Milton Friedman to the lowliest academic researcher has documented. Drug abuse (which, interestingly, is nowhere defined in the law, which simply prohibits the use of scheduled substances) is a public health problem, and criminalizing it doesn’t help anyone. It does, however, incentivize the drug trade, erode civil liberties, disproportionately affect the black community and make hypocrites of us all.

If pot were legal, regulated and taxed, we could control children’s access (it is harder in most communities for teens to get alcohol than pot) and generate income.

Sheila has a point. Although I certainly don't want to go the route of Uruguay where government is now selling pot, we do spend an extraordinary amount of money trying to stop drug trafficking that seems to only raise the cost of the drugs and increase the profits to those involved in the industry.  That taxpayer money could be better spent elsewhere.

While my friends against the War on Drugs have their hearts in the right place, they are misguided when it comes to politics.  They actually believe their opponents are those who still believe in the war on drugs is good social policy, a way to stop people from ruining their lives by becoming hooked on drugs.  If they could just convince those people the policy hasn't work, they believe they will win the political battle.  That is so naive.

The real enemies of drug decriminalization are the law enforcement agencies who have supplemented their budgets with millions of dollars in civil forfeiture money, typically money that can be spent on without any budgetary oversight.  Prosecutors also receive a share of these forfeiture proceeds as well as diversion fees from minor drug offenders.  These officials are going to fight like a stuck pig if their source of funds is threatened.

Law enforcement officials, prosecutors, and private corrections industry people will all line up to testify about the need to continue the War on Drugs.  They'll say how bad drug use would be if we don't continue to prosecute and incarcerate offenders.  They will claim that the War on Drugs can be won....they just need to fight harder.   In the end though it will be all about the money...money they only get if the status quo continues.  They are the real enemy when it comes to the movement to modify the nation's drug laws.

It is not one or the other, it is both. It is important to realize that Americans need government permission to use ANY drug, not just intoxicants. The origin is in the nanny of all nannies, the prescription drug law, whose centennial is next year.

Can't say enough great things about Donna. She is extremely intelligient and knows the real estate market inside and out. She has incredible attention to detail and pointed out things in potential homes that other realtors never considered. Stop Eviction San Francisco

If you have enough Money you can go into Drug Rehab, if you do not have enough money it is Jail.

The Military, Police and Corrections Industries AKA Wall Street-Security-Military-Industrial Complex would bitterly oppose any Legalization of Pot. I think Pot should be Legalized and controlled similar liquor.