Yesterday, we had yet more support for my contention that NFL referees do not know how to apply the replay rule. ESPN reports: 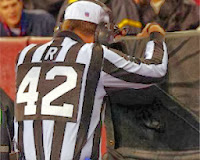 After taking a timeout to make sure they wanted to go for it, Bengals coaches sent out their goal-line unit, headed by defensive tackle Domata Peko, who served as an eligible blocking fullback. When the play began, Peko opened a hole to the right, and halfback BenJarvus Green-Ellis started following it.

As Green-Ellis made it through the hole, though, Colts defensive tackle Josh Chapman broke through the line of scrimmage and appeared to make contact with Green-Ellis' foot with an outstretched hand. Green-Ellis stumbled just after that, and fell forward as far as he could before going down. His momentum took him about six inches short of the goal line.

Originally, side judges ruled Green-Ellis down on the 1, which would have resulted in a turnover for the Bengals. But since the play came within the final two minutes of the half, it was submitted for booth review.

After about five minutes of looking at the play, the booth overturned it. Green-Ellis had scored, Triplette announced.

"There was discussion about whether the runner was touched down at the goal line or not," Triplette said to a pool reporter. "When we reviewed the video at the goal line, there was nobody touching him there, and then he bounced into the end zone."

I do not believe Triplette was forthcoming in his comments after the game.  No one had to hit Green-Ellis when he was on the ground before bouncing into the end zone.  NFL adopted a down by contact rule decades ago.

I have little doubt that Triplette reversed the call because he did not see Chapman trip Green-Ellis on the video.  He took the position that he would have called it differently than the referee at the time.  But that highlights the NFL referees' (and it's not just Triplette) lack of understanding of how to apply the rule on an instant replay.   According to the NFL rules, there must be "incontrovertible visual evidence" to overturn the original call made on the field.  Clearly there was no "incontrovertible visual evidence" that Chapman did not trip Green-Ellis. The call on the field should have been upheld.

NFL referees could use a law class on how standards of review work.  You can tell from the language the refs employ when they announce determinations of instant replay reviews that they are using a de novo analysis.  In law, the de novo review standard, is used by an appellate court usually on questions of law as opposed to questions of fact.  With a de novo review there is no deference given to the decision made at the trial court level.  Rather the appellate court "stands in the shoes" of the trial court.  With respect to the NFL, the "trial court" decision is the referee's original call on the field.

Instead NFL referees ought to be using a "clearly erroneous" standard to reviewing calls under the instant replay rule.  Under that standard a ruling on appeal will not be disturbed unless the reviewing court is left with a "definite and firm conviction that a mistake has been committed" by that court.   Employing that standard, even if the replay review official believes the original call was wrong, if there is any evidence to justify the original call, that call has to be upheld.

NFL referees simply need more training on how to apply the instant review standard.
Posted by Paul K. Ogden at 9:54 AM

I still say they should do it like the Big Ten and have the replay official up in a isolated box. The calls would be made quicker and they would have better replay equipment. Of course that would cost money and take away from the money they would get renting it out. I agree with you on the call thou.

NFL now says it was a judgment call, which perhaps means even the NFL doesn't understand the rule.

I agree with guy77 that the NFL peep show equipment is a joke. Put a ref in the booth and hire people accustomed to watching film.

Exactly Btownmoon Like the retired refs that CBS and Fox and ESPN use. They get it right quicker then the refs on the field do!

I maybe I am lone wolf, but I do not believe in Instant Replay. There are plenty of officials on the field to make the call. Some maybe wrong, and it part of the game. Considering how complex football has become, it is surprising the Officials have such good recall of of the Rules.

Or is this about money? the NFL can show more commercials?