With corn being Indiana's largest crop, Hoosier farmers have done well with the federal government's indirect subsidization of ethanol production.  But for consumers it has readily become apparent that putting corn in gas tanks wasn't such a good as the resultant shortage of corn has driven up food prices.   But while the poor economics of ethanol increasingly has gotten publicity, the fact that ethanol is bad for the environment has been under reported.  A lengthy Associated Press story rectifies that deficiency with a lengthy report:


[T]he ethanol era has proven far more damaging to the environment than politicians promised and much worse than the government admits today. 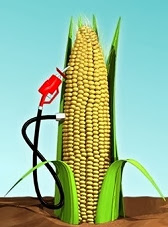 As farmers rushed to find new places to plant corn, they wiped out millions of acres of conservation land, destroyed habitat and polluted water supplies, an Associated Press
investigation found.

Five million acres of land set aside for conservation — more than Yellowstone, Everglades and Yosemite National Parks combined — have vanished on Obama’s watch.

Landowners filled in wetlands. They plowed into pristine prairies, releasing carbon dioxide that had been locked in the soil.

Sprayers pumped out billions of pounds of fertilizer, some of which seeped into drinking water, contaminated rivers and worsened the huge dead zone in the Gulf of Mexico where marine life can’t survive.

The consequences are so severe that environmentalists and many scientists have now rejected corn-based ethanol as bad environmental policy. But the Obama administration stands by it, highlighting its benefits to the farming industry rather than any negative impact.

Farmers planted 15 million more acres of corn last year than before the ethanol boom, and the effects are visible in places like south central Iowa.

The hilly, once-grassy landscape is made up of fragile soil that, unlike the earth in the rest of the state, is poorly suited for corn. Nevertheless, it has yielded to America’s demand for it.

“They’re raping the land,” said Bill Alley, a member of the board of supervisors in Wayne County, which now bears little resemblance to the rolling cow pastures shown in postcards sold at a Corydon pharmacy.

All energy comes at a cost. The environmental consequences of drilling for oil and natural gas are well documented and severe. But in the president’s push to reduce greenhouse gases and curtail global warming, his administration has allowed so-called green energy to do not-so-green things.


The government’s predictions of the benefits have proven so inaccurate that independent scientists question whether it will ever achieve its central environmental goal: reducing greenhouse gases. That makes the hidden costs even more significant.

“This is an ecological disaster,” said Craig Cox with the Environmental Working Group, a natural ally of the president that, like others, now finds itself at odds with the White House.

To see the rest of the lengthy article, click here.

Thanks to the Indiana Law Blog for finding this interesting article.
Posted by Paul K. Ogden at 11:20 PM

I have saved this article so I could come back in the future and go through it once more. It is very intriguing, well-researched and also composed. I almost never observe marvelous content these days. please visit Car for Loans

Take a look at this. http://abcnews.go.com/Politics/wireStory/industry-takes-aim-ap-ethanol-investigation-20858940

Gee Paul, since global warming is a myth, I'm not certain why you are concerned -- except to stick it to Obama.

Seriously, I never thought that it made sense, evironmentally or otherwise, to grow crops to turn into fuel. If we used "waste" that would be another thing, but to purposefully grow corn to turn into ethanol is foolish -- unless you want to drink it.

One thing pointed out by you and in the article is the incredible human desire for the quick buck. We destroy pristine land, over-fish in our oceans, and in the past, clear cut forests, all for that quick buck now, without regard for the future.

Actually I thought the shot at Obama in the article is unfair. He's hardly the only politician who has pushed ethanol. Both Democrats and Republicans have strongly pushed ethanol. Perhaps it is Democrats pandering to the alternative energy zealots and Republicans pandering to farmers who dominate the politics in many of the red states, but in the end does it matter why? They both signed on to a policy, ethanol, that is a financial and environmental disaster.

A knowledgeable engineer predicted some years ago that inefficiencies of burning food as fuel would inflate tortilla prices. He was right & that happened.

Oil is a crop (!!!); deep soil variety, produced daily within the bowels of the earth. Its handling is no more or less a valid concern than that of batteries.

Years ago there were people that sounded the alarm on Ethanol's effects on the environment. There was in addition the reports that it took more energy to produce ethanol than the energy you received from the final product all things considered. Both of these issues were either under reported in the Mega-Media or not reported on at all.

Crony-Capitalism and political pandering to the farm states created this situation.

Alarm bells have been sounded on the effects of fracking, but again the bells are silenced in the Mega-Media.

Ethanol was, is, and will always be ... stupid. No better word. Stupid.

Thoughts on this abomination:

1. Richard Lugar is the godfather of ethanol. He ran the Senate Ag committee and this is as much his baby as anyone's. Ethanol caused huge food inflation, and therefore hunger, in Central America. IMO, Lugar is therefore guilty of genocide and should be tried in The Hague.

2. Just like the housing bubble was created to boost bank profits, ethanol was created to boost prices of commodities and farmland. Which both lead to more bank profits, as businesses acquire more farmland on credit. Get rid of ethanol and farmland goes way down. More acreage planted also means more fertilizer and pesticides, also good for business.