Father John Hollowell's story on his blog about a sign in Northview High School, located in Brazil, Indiana, has caught national attention appearing in Town Hall and on the FoxNews website:


At first when I walked past the sign I thought to myself - "Oh, cool, they're starting to catch on that our population levels are at a critical phase and that we're heading for a demographic winter because no one is having kids anymore; they're trying to get the word out that our population growth is trending towards a crisis...." 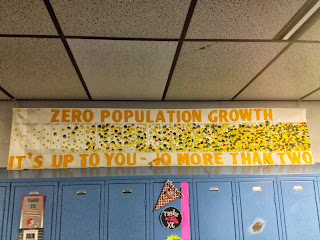 Then I literally had a sick feeling in my stomach when I realized I had the sign completely wrong.

The math "project" hanging in the hallway reads - "Zero Population Growth...It's Up To You - No More Than Two"

You can't probably read the sign but it has one smiley face representing 10 million people...and I mean look at the sign...if people keep having kids the smiley faces won't fit in the box anymore!  Look how scientific it is (sarcasm).

Father Hollowell is correct.  The sign maker's lack of knowledge about the birth rate in the United States is disappointing.  In fact, many western countries currently have birth rates below replacement levels.  Recently a news story lamented that, due to a declining birth rate, there were not enough younger people in Japan to support the people who were entering their retirement age.

In the United States our birth rate is 1.9%, also below replacement level.  The only reason our population has risen at all is due to immigration, both legal and illegal.  We are indeed facing a possible population crisis in this country...a crisis caused by a below than replacement level birthrate.  The Economist reported in August of last year:


For years, America was unusual among rich countries in having a relatively high [total fertility rate] of around 2.1, the so-called “replacement rate”, at which a population stabilizes over the long term. European countries were typically below that rate, sometimes far below it.

So it comes as something of a shock to discover that in 2011 America’s fertility rate was below replacement level and below that of some large European countries. The American rate is now 1.9 and falling. France’s is 2.0 and stable. The rate in England is 2.0 and rising slightly.

American fertility reached its recent peak in 2007; its fall has coincided with the economic crisis that began at the end of that year. Recession seems to have reduced fertility through at least two channels. First, migrants often cannot find work and go back home. Since they tend to have slightly larger families than native-born citizens, this reduces fertility. It has happened in Spain in the past two years, and may be happening in America as Mexicans leave.

Second, loss of income, compounded by the housing crisis, is causing young people to postpone marriage, the setting up of new homes, and having children. In 2011 the Pew Research Centre asked 18-to-34-year-old Americans about their reaction to recession: 22% said they had postponed having a baby and 20% said they had postponed marriage as a result. This reaction is evident in Europe, too, but the response seems to have been sharper in America.

Earlier this year the USA Today reported about the consequences of a birth rate below replacement levels:


The drop in U.S. births to their lowest level since 1920 is sounding alarms about the nation's ability to support its fast-growing elderly population.

As public concern mounts, a growing number of books, reports and columns are laying out challenges the United States will face because of this demographic upheaval: Fewer babies are being born while the wave of 78 million older Baby Boomers have only begun to retire (the oldest turn 67 this year).

The recent decline, fueled largely by a deep recession and slower immigration, has pushed the U.S. fertility rate below the 2.1 "replacement level'' — the number of children women are expected to have in their lifetime if current rates continue and the number needed to keep the population stable.

The slowdown is worrisome to many because of the growing gap between working-age populations that fund social programs and the elderly who rely on them.

The imbalance between children and retirees is growing. The economic burden on a child born in 2015 will be nearly twice that of a child born in 1985, according to the USC study.

"These are two trends going in the opposite direction," says demographer Dowell Myers, director of the Population Dynamics Research Group at the University of Southern California. "We will be increasingly dependent economically and socially on a smaller number of children."

1. Why is a public school promoting a political agenda ? China has taken population control to the extreme, including forced abortions for women bearing a second child.

2. Liberal non-profits in the US have a total of hundreds of billions in assets. If the environment is so dire and overpopulation such a plague, why not use that money to pay poor people worldwide to be sterilized ? A thousand bucks to each of the 50 million poorest people in India, and a thousand to do the operation over there, that's 100 billion. Yes, this is extreme and creepy, but it sure would be effective, if the goal is to stem population growth.

Seriously: do you think a banner in an Indiana school will have any effect on the birth rate in the United States?

Ellen, it's not about affecting the birth rate. It's rather about what the kids are being taught - bad information.

Here is a quote from Father Hollowell's blog, "This is about the most messed up thing I've seen in a long time. We might as well have Nazi flags hanging in the hallway."

Nazi Flags??? Over the top, I would say. "Messed up" is our War Machine. Main Stream Churches are rather silent on that issue.

I am a part of the baby-boomer generation. We have been around for 60 years or so. If there are going to be issues with the boomers retiring, it is not our fault. The politicians have had plenty of time to fund a retirement and medical benefits for us.

If young people today are not having children perhaps it has something to do with the steady erosion of the Middle Class, and lack of of well paying jobs.

I was born and raised a Catholic. Let's face it woman are second class people in the Catholic Church, they can hold no positions of power. The Church even opposes the "Pill,"