I get a kick out of my friends who criticize global warming skeptics for daring to question the orthodoxy..  The very foundation of science is skepticism. Yet they insist that those who don't simply accept the theory simply do not understand the science behind global warming, generally have little more than a tenuous grasp of the subject themselves.  Ask an alarmist what percent of the Earth's atmosphere is made up of carbon dioxide.  Ask them what percent of the CO2 emissions are from nature as opposed to man.  The numbers are, respectively, .04% and 97%. 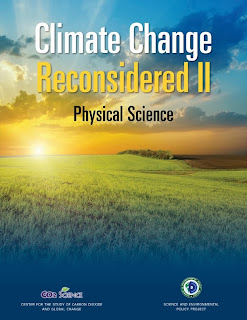 
NIPCC seeks to objectively analyze and interpret data and facts without conforming to any specific agenda. This organizational structure and purpose stand in contrast to those of the United Nations’ Intergovernmental Panel on Climate Change (IPCC), which is government-sponsored, politically motivated, and predisposed to believing that climate change is a problem in need of a U.N. solution.

In its Summary for Policymakers, the NIPCC quite correctly criticizes the IPCC's methodology, a point of emphasis for me because of the danger that IPCC has allowed its political objectives to color the presentation of the science of global warming:


The IPCC relies on three lines of reasoning: computer models that it asserts show CO2 to be responsible for most of the global warming in the twentieth century, a series of postulates that make a plausible case for its hypothesis, and circumstantial evidence that would be consistent with its hypothesis were it true....

Although the IPCC’s reports are voluminous and their arguments impressively persistent, it is legitimate to ask whether that makes them good science. In order to conduct an investigation, scientists must first formulate a falsifiable hypothesis to test. The hypothesis implicit in all IPCC writings, though rarely explicitly stated, is that dangerous global warming is resulting, or will result, from human-related greenhouse gas emissions. In considering any such hypothesis, an alternative and null hypothesis must be entertained, which is the simplest hypothesis consistent with the known facts. Regarding global warming, the null hypothesis is that currently observed changes in global climate indices and the physical environment, as well as current changes in animal and plant characteristics, are the result of natural variability. To invalidate this null hypothesis requires, at a minimum, direct evidence of human causation of specified changes that lie outside usual, natural variability. Unless and until such evidence is adduced, the null hypothesis is assumed to be correct.

In contradiction of the scientific method, the IPCC assumes its implicit hypothesis is correct and that its only duty is to collect evidence and make plausible arguments in the hypothesis’s favor. One probable reason for this behavior is that the United Nations protocol under which the IPCC operates defines climate change as “a change of climate which is attributed directly or indirectly to human activity that alters the composition of the global atmosphere and which is in addition to natural climate variability observed over comparable time periods” (United Nations, 1994, Article 1.2). Not surprisingly, directing attention to only the effects of human greenhouse gas emissions has resulted in the IPCC failing to provide a thorough analysis of climate change in the round.

All three of the IPCC’s lines of reasoning, summarized in Figure 2, depart from proper scientific methodology. Global climate models produce meaningful results only if we assume we already know perfectly how the global climate works, and most climate scientists say we do not (Bray and von Storch, 2010). Moreover, it is widely recognized that climate models are not designed to produce predictions of future climate but rather what-if projections of many alternative possible futures (Trenberth, 2009). Postulates, commonly defined as “something suggested or assumed as true as the basis for reasoning, discussion, or belief,” can stimulate relevant observations or experiments but more often are merely assertions that are difficult or impossible to test (Kahneman, 2011).   Observations in science are useful primarily to falsify hypotheses and cannot prove one is correct (Popper, 1965, p. vii).

The NPCC then goes on to lay open the IPCC's "precautionary principle," which exposes the politics behind the science:


Facing such criticism of its methodology and a lack of compelling evidence of dangerous warming, the IPCC’s defenders often invoke the precautionary principle. The principle states: “Where there are threats of serious or irreversible damage, lack of full scientific certainty shall not be used as a reason for postponing cost-effective measures to prevent environmental degradation” (United Nations, 1992, Principle 15). This is a sociological precept rather than a scientific one and lacks the intellectual rigor necessary for use in policy formulation (Goklany, 2001).

A true scientific approach would not say to ignore uncertainty if it gets in the way of political activity. The statement is an admission that IPCC's agenda is a political one and that selective use of science is the vehicle by which to reach its political goal.

The NPCC proceeds at length to debunk the IPCC's claims line for line, particularly as those claims relate to the effect of increased CO2 levels in the environment.  A summary of the NPCC's conclusions are as follows:


• Atmospheric carbon dioxide (CO2) is a mild greenhouse gas that exerts a diminishing warming effect as its concentration increases.

• Doubling the concentration of atmospheric CO2 from its pre-industrial level, in the absence of other forcings and feedbacks, would likely cause a warming of ~0.3 to 1.1°C, almost 50% of which must already have occurred.

• A few tenths of a degree of additional warming, should it occur, would not represent a climate crisis.

• Model outputs published in successive IPCC reports since 1990 project a doubling of CO2 could cause warming of up to 6°C by 2100. Instead, global warming ceased around the end of the twentieth century and was followed (since 1997) by 16 years of stable temperature.

• Over recent geological time, Earth’s temperature has fluctuated naturally between about +4°C and -6°C with respect to twentieth century temperature. A warming of 2°C above today, should it occur, falls within the bounds of natural variability.

• Though a future warming of 2°C would cause geographically varied ecological responses, no evidence exists that those changes would be net harmful to the global environment or to human well-being.

• At the current level of ~400 ppm we still live in a CO2-starved world. Atmospheric levels 15 times greater existed during the Cambrian Period (about 550 million years ago) without known adverse effects.

• The overall warming since about 1860 corresponds to a recovery from the Little Ice Age modulated by natural multidecadal cycles driven by ocean-atmosphere oscillations, or by solar variations at the de Vries (~208 year) and Gleissberg (~80 year) and shorter periodicities.

• Earth has not warmed significantly for the past 16 years despite an 8% increase in atmospheric CO2, which represents 34% of all extra CO2 added to the atmosphere since the start of the industrial revolution.

• CO2 is a vital nutrient used by plants in photosynthesis. Increasing CO2 in the atmosphere ggreens” the planet and helps feed the growing human population.

• No close correlation exists between temperature variation over the past 150 years and humanrelated CO2 emissions. The parallelism of temperature and CO2 increase between about 1980 and 2000 AD could be due to chance and does not necessarily indicate causation.

• The causes of historic global warming remain uncertain, but significant correlations exist between climate patterning and multidecadal variation and solar activity over the past few hundred years.

• Forward projections of solar cyclicity imply the next few decades may be marked by global cooling rather than warming, despite continuing CO2 emissions.

The NPCC's summary for policymakers is available here.

The IPCC's summary for policymakers is available here.

Enviro-scammers are blinded- by science!

I recently read a article on YAHOO that the glaciers in Alaska are melting and exposing trees that a only a 1,000 years old. Now my question is, was there global warming a thousand years ago? 900 AD wasn't that long ago. What caused the glaciers to grow in the last 1,000 years? Were we in an ice age? Why was it so darn tropical in 900 AD?

Ok Paul, ready to put your money where your mouth is? I would be willing to wager $10,000 that the average temperature in Indianapolis over the next ten years (defined as the average of all official NWS hourly measurements at Indianapolis International Airport fron January 1, 2014 to December 31, 2023) will be higher than the same average for the previous ten years. I chose that definition because while it is only one weather station, those measurements are unlikely to be affected by anything other than the actual weather. If you believe your nonsense, you should take me up on this, because if the last decade was flukishly warm due to natural variability, you will almost certainly win. So... are you in?

Drax fails to mention that collection sites make a difference in terms of averages. Wanna bet the collection site and / or surrounding landscape have been altered in a way that can affect those "averages?"

Note that one of the many scientific problems enviro-scammers have is relying on "warming" data from collection sites within feet of AC compressors which give off heat.

Some wise people were skeptical before skepticism became vogue. For instance:

Environmental Myths and Hoaxes: The Evidence of Guilt is Insufficient, May 1, 1990