Broad Ripple Takes Another Step Toward Shedding "Village" From Its Name; Politically-Connected Developer Ponders How Much of the Public's Tax Dollars He Will Ask For 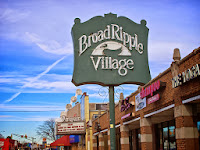 The Metropolitan Development Commission voted 5-2 Wednesday to grant the rezoning and variance requests from Browning Investments and a partner to build the controversial five-story project along the Indianapolis Water Co. canal at Broad Ripple and College avenues.

Carmel-based Browning and a partner want to build a 71-foot-tall building that would contain a 33,000-square-foot Whole Foods supermarket on the first floor and 103 apartments above. The building would be connected to a newly built 355-space parking garage. The project needs rezoning and a variance because of its height, the planned outdoor seating, and other uses.
...

Meanwhile the IBJ reports that Browning, principal of the developer, is expected to ask for city assistance to help finance the project, a process that, according to Browning, could take between three to four months

Shouldn't the public have had the right to know exactly how much Browning was requesting from taxpayers Day 1 of this project?
Posted by Paul K. Ogden at 8:21 AM

Shouldn't the public have had the right to know exactly how much Browning was requesting from taxpayers Day 1 of this project?

Short answer is No. The Public has no right to know about the Pacers, or Colts finances, even though both organizations gorge themselves at the Public Dollar Trough.

I am sure we will find out once the Ink is Dry, and our Elected Officials have the opportunity to prostrate themselves praising the Great Deal they sewed up.