This morning I had the opportunity to listen to Civil Discourse now.   Mark Small, the show's host, led Republican Andrew Kirch and Libertarian Miah Akston into a discussion of the Affordable Care Act, i.e. Obamacare.  Of course, Mark believed that Obamacare would result in peace, harmony and free health care of the highest quality.  Kirch and Akston agreed the program wouldn't work.  Kirch saw it as ushering in an era in which Republicans will win election after election as long as the unpopular Obamacare stays in place.  Akston, who tends to lean in the anarchist direction, believed that full implementation would bring down the government.

I certainly don't think Obamacare will work.  The program is a mess.   But Kirch and Akston are dead wrong on the political consequences.  When I taught college I included in my lesson something called the "Iron Triangle of Bureaucracy."  Wikipedia actually has a good description of the concept:


In United States politics, the iron triangle is a term used by political scientists to describe the policy-making relationship among the congressional committees, the 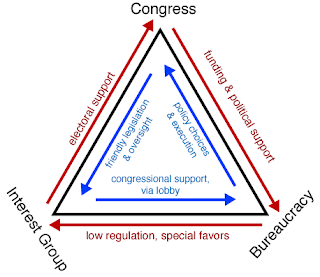 For example, within the federal government the three sides often consist of: various congressional committees, which are responsible for funding government programs and operations and then providing oversight of them; the federal agencies (often Independent agencies), which are responsible for the regulation of those affected industries; and last, the industries themselves, as well as their trade associations and lobbying groups, which benefit, or seek benefit, from these operations and programs.

At one corner of the triangle are interest groups (constituencies). These are the powerful interests groups that influence Congressional votes in their favor and can sufficiently influence the re-election of a member of Congress in return for supporting their programs. At another corner sit members of Congress who also seek to align themselves with a constituency for political and electoral support. These congressional members support legislation that advances the interest group's agenda. Occupying the third corner of the triangle are bureaucrats, who are often pressured by the same powerful interest groups their agency is designated to regulate. The result is a three-way, stable alliance that is sometimes called a sub government because of its durability, impregnability, and power to determine policy.

Consumers are often left out in the cold by this arrangement. An iron triangle can result in the passing of very narrow, pork-barrel policies that benefit a small segment of the population. The interests of the agency's constituency (the interest groups) are met, while the needs of consumers (which may be the general public) are passed over. That public administration may result in benefiting a small segment of the public in this way may be viewed as problematic for the popular concept of democracy if the general welfare of all citizens is sacrificed for very specific interests. This is especially so if the legislation passed neglects or reverses the original purpose for which the agency was established. Some maintain that such arrangements are consonant with (and are natural outgrowths of) the democratic process, since they frequently involve a majority block of voters implementing their will through their representatives in government.

The folks outside the constituency, members of the public, have diffused political power when it comes to the issue. While it might be important to them, it is not nearly as important as to those in the triangle. Further, their opposition is very disorganized.  Even though much greater in number, those outside the triangle do not have the political clout necessary to scale the mountain to dislodge the government program.

As an example, there was a Board of Tea Appeals, consisting of seven people, each of whom was to be an expert on teas. Those experts were to prepare and submit to the Secretary of Health and Human Services standard samples of tea.   Wikipedia describes the Board's activities:


In accordance with the board of experts' recommendations, the Secretary was instructed to "fix and establish uniform standards of purity, quality, and fitness for consumption of all kinds of teas imported unto the United States" and to deposit samples of these standards in the customhouses of various ports of entry. Tea importers were required to submit samples of their product for comparison with the standard samples kept at the customhouses. The imported samples were then tested "by a duly qualified examiner," who would test "the purity, quality, and fitness for consumption of the... [imported tea samples] according to the usages and customs of the tea trade, including the testing of an infusion of the same in boiling water and, if necessary, chemical analysis."

The statute declared it unlawful to import into the United States "any merchandise as tea which is inferior in purity, quality, and fitness for consumption to the standards [kept at customhouses..." For nearly a century, Congress provided that no imported tea could enter the United States unless federal tea-tasters decided that it measured up to preselected standard samples....

The Board remained in existence despite the fact that the FDA already regulated the quality of tea imported to the United States under the Federal Food, Drug and Cosmetic Act of 1938.

The 1897 legislation that had created the Board of Tea Appeals was finally repealed in 1996.  The Board remained in existence for 99 years, 58 years of which its work ws duplicated by another agency.  Prior to 1996, there were numerous attempts to eliminate the board, which had received a great deal of publicity as an example of government waste.  Yet year after year the constituency for the Board prevailed in keeping the program in place.

That is an example of how the Iron Triangle of Bureaucracy works to perpetuate even a tiny, unnecessary government agency.  Imagine the power of the iron triangle that will be created by Obamacare.  If Republicans think that implementation of Obamacare will propel them to political success they are sorely mistaken.  Even if Obamacare fails to solve our health care problems, which it surely will fail, it will still succeed politically  The Iron Triangle will make sure of that.
Posted by Paul K. Ogden at 2:10 PM

This is coherent, incisive analysis Mr. Ogden. Programs are legacy designed to rob the public treasury without the interference / inconvenience of public interest.

Republicans have confused themselves into believing that their self image deficiencies are somehow credible basis for principled strategy.

The establishment is pavlovian trained & shaped by its ideological opponents; sculpted to limits of self interest, trained reflexes subverting what ought be principled pro-flexes.

Having been short changed by the establishment, one too many times, 8M registered Republicans got the message & declined to participate in the 2012 election.

Notice that establishment "strategists" don't address those 2012 non-participation numbers except to "blame" their poor results of short change practices on those they simultaneously claim & abuse as the "base."

The party's defectively structured for self service at the expense of those they claim during election cycles & otherwise abuse. The jig's up, the base knows & they're done playing; a problem that no amount of last minute sophistry can overcome.

Base support in upcoming elections will be selectively focused on those who can articulate principles without notes & embrace Tea Party sensibilities of Constitutionally enabled American exceptionalism.

The broader party establishment will suffer ongoing non-participation, born of an awareness that principles aren't complicated, but something other than attempts at magic tricks or reflexively considering events through branding goggles.

In the absence of immediate & base verifiably credible course change; where do they expect "their votes" to come from in 2014 & 2016?

We don't have to look farther than Medicare and Medicaid, which Republicans have long supported. To a great degree the programs are responsible for the corrosion of medical care and escalation of costs, but they remain as popular as Britain's crummy National Health Service. So long as favored constituencies are benefitted, the mass of the population can be convinced that poor quality and high prices are acceptable. Licensure of doctors, which economists have shown to harm consumers, is even more popular among the Republicans.

Obamacare was the brainchild of the Heritage Foundation, and first implemented by the most recent Republican candidate for president. The first president to propose nationalize health care was Republican Richard Nixon.

"It is always a simple matter to drag the people along whether it is a democracy, or a fascist dictatorship, or a parliament, or a communist dictatorship. Voice or no voice, the people can always be brought to the bidding of the leaders." -- Hermann Goering

Our system here in the USA of Campaign Contributions certainly plays into the "Iron Triangle" making it virtually certain the same people are elected time after time.

Does anyone really believe that Pelosi, Boehner, Reid or McConnell are effective in the leadership roles??

We could have looked to Western Europe, Canada, or Japan among others for Health Care Models. My own research revealed these countries pay less per capita then we do in US, and longevity is as good or better than ours.

The public option was never allowed to see the light of day. It was DOA, no debate or investigation was permitted on it.