Over on Facebook, a discussion about Brian Mahern's attempted coup attempt led to a comment by his father, former State Senator Louis Mahern, that Democratic Marion County Chairman, that anyone named "Mahern" from appointed precinct committeemen (PC) slots.  Of course the Mahern family has long been very involved in Marion County Democratic politics, with Louis, Dane (Brian's cousin), and Ed (Brian's uncle) serving in various elected and appointed positions. 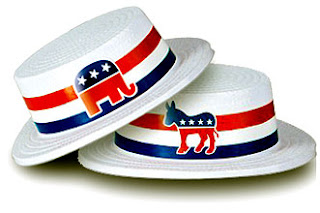 If Chairman Miller did indeed remove appointed Maherns from PC slots he wouldn't be alone in his manipulation of the PC system.  Both Republican and Marion County Chairmen have been removing appointed committeemen from slots for several years in an effort to ensure the people the people they want are slated.  County chairmen have also been able to ward off possible coups by removing appointed PCs who might vote or run against them.

When the legendary Republican County Chairman John Sweezy was at the helm he refused to remove appointed PCs simply because they wouldn't vote the "right" way at a slating.  He also placed an emphasis on having elected PCs.  Now the emphasis runs in the opposite direction.  Party leadership does not want elected PCs as it is easier to control who is slated if the PCs are appointed.  I believe going into the last county-wide slating, only 15% of the Marion County GOP PCs were appointed..

Under Indiana law, (IC 3-10-1-4.5 & 4.6) party precinct committeemen are elected every four years.  Pursuant to another provision, each person seeking to be elected as a PC has to be certified as a registered voter in that precinct.  (IC 3-8-2-9).  Almost all the other provisions relating to precinct committeemen have been removed from the statutes and can be found in party rules. In fact, IC 3-10-1-4.6(c) refer to GOP party rules:

Let's look more closely at the party rules, in particular those governing the State Republican Party:

The Republican Party has adopted rules allowing elected PCs to be removed for cause:


(1) any willful violation of these Rules, a resolution of the State Committee, or a
statute pertaining to elections; or

What follows in the rules is a description of the procedure to be followed when removing a elected PC for cause.

The rules also provide for the appointment of PCs in the event of a vacancy:


Rule 3-19.   The County Chairman may fill any vacancy in the office of precinct committeeman or vice-committeeman (subject to Rule 2-12) by certifying the appointment to the State Secretary on the prescribed form.  Anyone chosen to fill the vacancy shall be a qualified elector of the county, a member in good standing in the Republican Party, and have cast a Republican Party ballot at the individual’s most recent vote at a primary election. An individual who has not previously voted in a Primary Election must have an authorization form signed by the county chairman and the person being appointed committeeman saying the individual pledges full support to the Republican Party and the candidates of the Republican party. The form (IRSC/CA-1) must be attached to the back of the appointment form when the county chairman completes the form sent to the State Committee.  No precinct committeeman or vice-committeeman can be appointed in a precinct in which there are no registered voters.

(The irony here is that while another rule (Rule 3-27) lets a county chairman remove a PC for no longer being a resident of the precinct, the rule above allows the elected PC to be replaced by an appointed PC who lives anywhere in the county.)

Now let's turn to the removal language in the rules as applied to appointed PCs.

Rule 3-20.  The individual appointed under Rule 3-19 serves for the term specified in Rule 2-9 (for appointed precinct committeemen) or Rule 2-16 (for vice-committeemen) and is subject to earlier removal at the pleasure of the County Chairman.

The highlighted language is key.  County chairmen, those who want maximum power, have an incentive to prefer appointed PCs who could be easily removed.  This is particularly true in Marion County where slating almost always dictates who the primary winners will be.


But are the party rules which have shifted extraordinary power to the county chairmen and I would argue have undercut the traditional strength of party workers, legal?  I don't buy that they are.

The question is whether a party rule can change the status of PC who is appointed versus one who is elected.  Absent the legislature giving state parties that authority, I don't think so.

Same goes with residency.  If a person needs to be a resident of a precinct to be elected as a PC, I think that requirement would also apply to someone who is appointed.  Again, absent the legislature setting aside the residency requirement for appointed PCs, or giving the authority to do that to the state parties, I don't think party rules can change that statutory requirement.

Of course, the issues raised her have never been litigated and may never be litigated.  Regardless, I think the parties made a big mistake in adopting rules that empowered county chairmen at the price of taking power away from precinct committeemen.  Without a strong grass roots, a party is unlikely to be successful.
Posted by Paul K. Ogden at 1:45 PM