Politico Gets Redistricting Strategy Wrong in Article on Republican Gerrymandering

Over at the blog Politico, writer Alex Isenstadt has a theory.  He concludes that because Republicans control redistricting in five times as many districts as Democrats, Republicans are creating districts that result in Republican congressman who are too far right to govern effectively: 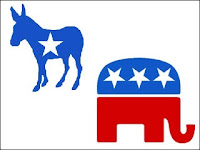 Some top GOP strategists and candidates warn that the ruby red districts the party drew itself into are pushing House Republicans further to the right — narrowing the party’s appeal at a time when some GOP leaders say its future rests on the opposite happening. If you’re looking for a root cause of the recurring drama within the House Republican Conference — from the surprise meltdown on the farm bill to the looming showdown over immigration reform — the increasingly conservative makeup of those districts is a good place to start.

The shellacking Republicans took in 2012 has triggered months of consternation that the party is too white, too conservative and too male. But tell that to the increasing number of House Republicans who are safely ensconced with nary a worry that a Democrat might unseat them in the next election.

First of all I don't buy the premise that Republicans drew five times as many congressional districts as did Democrats. In virtually every state in the country, state legislatures control redistricting. While Republicans do have majorities in most state legislatures, Democrats still control many of them, including California and New York, the two most populous states in the union.  So to say it was 5-1 on drawing districts is a stretch to say the least.

But let's assume that Republicans did control redistricting in the vast majority of congressional districts.  The strategy employed by the party in power, i.e. the GOP , is to spread out the vote of the majority party to capture as many districts as is safely possible, while concentrating the opponent's vote in fewer districts.  To put some numbers behind this strategy, Republicans in power would be drawing themselves in close but safe 60-40 districts, while concentrating their Democratic opponents in districts that are 80-20.   That strategy allows the party in power, again in our example Republicans, to win a larger number of congressional seats than would otherwise be the case.

Granted neither side tries to draw competitive seats. But the Republican seats drawn by Republicans who are in control of redistricting are actually going to include more Democratic voters and be more competitive than those GOP seats drawn by Democrats when they are in power.  They would be more likely to result in Republicans who are relatively more moderate elected from those 60-40 districts than Democratic members of Congress who are re-elected in the 80-20 districts.

Given how redistricting is done only a small percentage of congressional districts are competitive in general elections.  That results in more ideologically extreme candidates on BOTH sides of the aisle.  But to say that Republicans have been able to draw more conservative districts by being in charge of redistricting is to ignore basic redistricting strategy.  If Republicans are drawing more solidly Republican districts than would be the case if the Democrats were in charge, then, well, they are doing it wrong.
Posted by Paul K. Ogden at 8:02 AM

For once we agree.

The ultimate goal of district gerrymandering would be Republicans winning their districts 50.1% to 49.9% every time, thus nullifying the wishes of a sizeable Democratic electorate, while at the same time allowing a few Democrats to win their districts 100% to 0%.

The only way the GOP, aka American Taliban, can win elections is with gerrymandering and suppressing votes. I won't be voting for one anytime soon. No mater how long I have to stand in line or hurdles I have to jump through, thanks to their activists judges.