Is "Human Trafficking" A Made Up Crisis for State and Local Officials to Extract Federal Dollars?

Someone needs to ask the question:  Is this crisis regarding "human trafficking" real or grossly exaggerated so state and local officials can claim the millions of dollars that Congress has allocated to fighting the crime?

Of course, human trafficking was a big story here in the Winter of 2011-2012 as Indiana officials pleaded for more legal authority to combat the crime in anticipation of hosting the Super Bowl.   It was back in the news again just days ago when Attorney General Zoeller joined with 48 other state attorneys general in asking Congress to amend  the Communications Decency Act to provide criminal jurisdiction to state and local prosecutors. 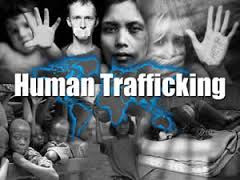 Virtually every time an Asian massage parlor is busted locally there is a press conferences with law enforcement officials claiming to have struck a blow against "human trafficking."  But when the cameras are turned off and the press leaves, the reality sets in that the people involved in the cases are not charged with human trafficking but rather good old fashioned prostitution.  Also it bears mentioning that the prostitution busts also come with a large seizure of cash, cars and equipment, which is then divvied up between the law enforcement agencies involved.

At the end of last year, the Atlanta Journal-Constitution went to check on the human trafficking numbers claimed by law enforcement officials and found those numbers to be incredulous:


The situation was dire, police warned. The City of Atlanta was under siege by human traffickers.

Some 1,000 Asian women and girls ages 13 to 25 were being “forced to prostitute themselves” in the city, a 2005 internal police email said. Many of the victims, police said, were Korean.

Had agency leaders questioned the estimate, they would have found it defied common sense. If it were true, one in eight of the city’s Asians would have been sex slaves.

Perhaps, then, it’s little wonder that the program had such poor results that it drew scrutiny from the U.S. Department of Justice. An initial report said Atlanta police had found more than 200 victims, but auditors could only confirm four.

Atlanta launched its search for Korean prostitutes as hundreds of millions of dollars began to pour into anti-trafficking efforts nationwide. The federal Trafficking Victims Protection Act of 2000 gave special assistance to foreign victims in the U.S. and paved the way for a 2004 Department of Justice initiative to fund local human trafficking task forces.
...

City officials argued they desperately needed the money. “Human trafficking is now beginning to get a foothold in Atlanta and must be stopped before it becomes entrenched,” police told Justice Department officials.

The Atlanta Police Department won a $450,000 three-year grant, and the city chipped in an additional $150,000. Two investigators and a sergeant joined forces with a Korean translator.
...

But this count was later revealed to be grossly inaccurate. Auditors for the Justice Department’s Office of the Inspector General could find documentation for only four victims, a July 2008 report said.

Such problems weren’t unique to Atlanta. Auditors found victim over-counts by task forces across the nation, although none was as bad as Atlanta’s.

The City of Los Angeles, for instance, identified 49 victims and the Metropolitan Police Department of Washington, D.C., found 51. Auditors confirmed none of them.

We are told by the State Department that every year 15,000 people are trafficked into the U.S. But then, where are they?” said Elzbieta Gozdziak, research director of the Institute for the Study of International Migration at Georgetown University.
...

If the problem were pervasive, more victims might have applied for special visas created by the 2000 anti-trafficking law. But between fiscal year 2002 and June 2010, the U.S. issued fewer than 1,900 of the visas, which allow victims to stay in the U.S., the Congressional Research Service found in a December 2010 report.

“Why are the numbers so small? Is it because the scope of the problem is not as big as they say? Or is it small because we don’t know how to find them?” Gozdziak asked.

Those numbers are proof that the fight against human trafficking has gone wrong, U.S. Sen. Charles Grassley, R-Iowa, said in a November 2011 report on a bid to reauthorize the trafficking law. While he supported it, he sought more accountability.

“Either the government is doing an unconscionably poor job of finding victims or there are not that many total victims in the first place,” Grassley wrote.

Here's another idea.  State and local law enforcement officials are grossly exaggerating the scope of the human trafficking problem to get their hand on federal tax dollars?
Posted by Paul K. Ogden at 10:04 AM

More victims would have applied for Visas? Seriously? And how exactly would they do that? Are you even aware that all forms of ID are taken away when a person is being trafficked...wow.
I am a survivor of human trafficking, yep. I exist, I was trafficked for over 9 years in D.C. and mainly in NYC, and believe me it does exist.
The main problem with all those stats you have quoted my friend is this: it is very hard to identify a victim who does not know they even are a victim. What does that mean? It would take me much more space than I have here to explain. But suffice it to say that when I share 'my story' I never ever quote statistics because I believe they are all over the place and frequently wrong. Does that mean that there are not people being trafficked...no they are being trafficked right here in this country, Barbara Amaya

Yeah, Barb, I didn't buy the Visa angle either. I probably wouldn't have included it were it not for the fact it was accompanied by Sen. Grassley's quote which I think is noteworthy.

I would point out that these are not my statistics but in the article I quoted.

I don't think anyone doubts that human trafficking exists. The issue is whether it's grossly exaggerated for the purpose of getting federal grants. I suspect that it is. But as you point out there is a problem quantifying the number and a lot of times you're just left with personal stories.

Re Barb's comment, from the research I've studied, DC is the city to which most Marion County women that are kidnapped and forced into prostitution, are taken for that purpose. So sorry for your pain and suffering, Barb.

www.BarbaraAmaya.com, I hope that all take time to go to her site, and get better informed, for the sake of our children. She can also be heard at YouTube.

While there are victims of 'human trafficking' - there are far more victims of domestic violence and spousal abuse. Not to mention victims of violent rape and sexual assault who go to the police and report the crime. Hundreds of thousands of untested rape kits sit in police evidence lockers deteriorating because there are no resources to test them.

The majority of people in sex work are NOT victims of ANYTHING other than the lies told by the victim pimps- these are the people who receive those federal dollars based on the highly inflated 'guesstimates' of alleged victims. Barb may have been a victim- I can't say because I never met her. But for her and others to claim that the rest of us whom THEY have never met ARE victims, simply because it is the politically correct perspective these days, does SO much harm to those who really are victims, by depleting the scarce resources that could help them. Decriminalize consenting adult commercial sex and allow us to go to the police when and if we 'realize' we are victims.
http://www.policeprostitutionandpolitics.com/html_cop_sex_trafficking/Cops%20prostitutes%20and%20child%20sexual%20exploitation-%20Sex%20Trafficking/assets/player/KeynoteDHTMLPlayer.html#38