This morning, I caught a bit of Greg Garrison on WIBC. Garrison was being highly critical of Democratic leadership in Indianapolis while praising the Republican leadership of the City for "balanced budgets" and pursuing things "we know work like public-private partnerships (i.e. corporate welfare) and privatization."

I'm not sure what Garrison is talking about.  First of all, by law municipal budgets always have to be balanced - the only question is how much smoke and mirrors are used to achieve the balance.  From what I read, the Ballard administration has used plenty of smoke and mirrors.  Even more significantly, over the last six years, I've seen the Ballard administration push to raise every tax and fee under the sun, including currently property taxes. As far as privatization, the parking meter contract, in which the City gives away 70% of the revenue from the meters for the next 50 years for a pittance paid up front, was probably the most one-sided deal this city has ever done.

But what about these public-private partnerships, things like the city administration using our tax dollars to give a $23 million subsidy to a private company to develop the old Market Square Arena property? Or what about the Broad Ripple Parking garage, built with $6.35 million of the public's money for the pure profit of private developer?  Or how about all those TIF districts created all over the city which end up diverting property tax dollars from basic services so that more money can be handed out to private developers in the form of tax abatements and direct subsidies? 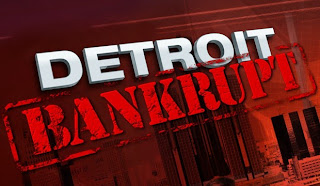 Later I flipped on WIBC again and Garrison was saying Detroit went bankrupt because of liberal policies.  He's not wrong when discussing things like out of control public employee pensions.   But what Garrison conveniently ignores is that Detroit, in an attempt to create economic development in its city, did the exact same thing Indianapolis does on a regular basis - hand over the public's money to the private sector in the name of economic development.


According to the AP,  Detroit is facing a $327 million budget deficit and "more than $14 billion in long-term debt."

But even though Detroit was drowning in debt, City political and business leaders plowed ahead with the downtown professional sports investment strategy.  Just this past December, it was reported that the owner of the Detroit Red Wings was looking to building a new $650-million entertainment district for the team in downtown Detroit with the help of state and local taxpayers:

A spokeswoman for the Ilitch family's Olympia Development said the proposal begins a process "to explore the viability" of such a district. But a news release quoted George Jackson Jr., the city's top development official and president and CEO of the Detroit Economic Growth Corp., as saying the plan "makes good business sense."

"It's not a plan for an isolated, single-use structure," Jackson said in the release. "Instead, it builds on the clear successes we've already had downtown integrating districts that feature entertainment and support commercial, retail and residential development around them."

There were no estimates yet of the number of residential units, retail shops or office space square footage.

A "significant private investment" -- presumably from the Ilitches -- would help pay for it. But the project also would need public support in the form of tax dollars currently collected by the city's quasi-public Downtown Development Authority. Parts of the plan need approval by the state Legislature.

Paying for the project would not require any new taxes, Jackson said. But a state Senate Fiscal Agency analysis said the financing arrangement, if approved, "would reduce both state School Aid Fund revenue and local tax revenue by an unknown amount."

As part of its economic development strategy, Detroit invested heavily in downtown sports stadiums to try to drive economic development.   The City was promised lofty returns on its money.  It didn't happen.  Detroit's fiscal woes only grew worse. The return on the investment in professional sports never paid off.

In an article last month the website Crain's Detroit Business discussed other public subsidies that flopped in Detroit and nearby Flint:

The 13-stop elevated single-track loop opened in 1987 at a cost of $200 million -- reportedly more than $60 million over budget and almost two years late because of construction and labor problems.

"The 2.9-mile monorail, once considered a possible savior of the city's dying center, is now being greeted with both the excitement of a child trying out a new toy and the dread of a parent wondering what will go wrong first," The New York Times wrote of the system's opening in August 1987.

It was designed as a feeder system for a citywide light rail system that so far hasn't happened and was intended to move 15 million passengers a year. Peak use was 2.38 million riders in 2012.

Since opening, the system has been threatened with shutdowns because of rising operational costs. Fare box and advertising revenue has to be supplemented with state and federal grants to cover the system's $12.3 million annual cost.

The federal government paid 80 percent of the capital costs, with the rest coming from state and local funding.

Its fleet of 12 automated, driverless vehicles is operated remotely by computer. The Detroit Transportation Co. operates the system as a public corporate body rather than a city department.

The thoroughbred horse racing track in Wayne County's Huron Township closed in late 2010 after two seasons because it didn't generate enough betting to stay open, and scrutiny of its land deal with the county made headlines.

The promise of jobs won Pinnacle's developers a deal to buy 320 county-owned acres for just $1 and led the county to make about $26 million in infrastructure improvements near the Huron Township site in 2007 and 2008.

The track went bust in 2010 as the horse racing industry nationwide suffered declines and when the state slashed its budget for racing officials. This drastically reduced the number of days the track could operate.

Allen Park in 2009 issued $31 million in bonds to finance the purchase of a former Visteon Corp. site to house Unity Studios for Southfield native and Hollywood producer Jimmy Lifton, who had proposed a $146 million film facility to capitalize on Michigan's lucrative new film incentives law of 2008.

But the Allen Park Studio Center soon proved a financial albatross for the city, after Unity had leased less than 60,000 square feet and Lifton was in a dispute over whether his company was making lease payments.

No studio ever opened at the Allen Park site, though Unity did operate a film school there for several months before moving out in 2010.

The departure left Allen Park saddled with more $2 million in annual debt service payments on the bonds and rent revenue that wasn't enough to cover the building's operation and maintenance costs.

It closed a year later. A coffee shop and food court closed before that. The location remains vacant.

Detroit's General Retirement System fund lost the $2.75 million it invested in the development

The city of Detroit in 1987 paid $42.2 million to Joseph Giacalone -- a member of the reputed Giacalone organized crime family -- and some of his business associates for 15 acres of land and the abandoned buildings and equipment sitting on it.

The land was bought by the city with the intent of giving it to Chrysler for its Jefferson Avenue plant expansion.

Indianapolis is repeating the same mistakes Detroit made with unbridled corporate welfare, including heavy professional sports subsidies.  However, unnlike Detroit, there is still time for Indianapolis to correct its disastrous economic development policies.  I wouldn't bet on it though.
Posted by Paul K. Ogden at 11:34 PM

RE: "I wouldn't bet on it though", no takers on that bet. Judging by the past performance of the CIB, the city council et.al. this city will continue to funnel tax dollars to billionaire team owners, give away parking garages, make ridiculous deals on city owned resources like parking meters and the water company and put every last square foot of Indy in a TIF.

It's not the tax cap it's misplaced priorities.

Government "competing" in what's supposed to be the free market, is a rigged game of referees pretending to be players.

It's predatory & hostile; not fostering. If the party of small government did exist, it wouldn't support the half pregnant "logic" of public / private partnerships.

The idea that Professional Sports can generate economic prosperity is a pipe dream or more like a nightmare for the tax payers.

The whole Pro Sports is a rigged system with Monopolies, Capitalism and Socialism thrown in. The owners maintain a protected monopoly, but reap the rewards of Capitalism when negotiating with the Media and of course all the Team Paraphernalia it can sell. They Socialize the costs of doing business with Cities and States providing the funding for the Stadiums.

This is Corporate Welfare but the Mega-Media and certainly The powers that be in Indianapolis would never label it such.

The pattern repeats itself with tax payer subsidized "development" and the Private Partner skimming profit off the top.

Haven't seen much discussion of this, but you know that the owner of the new soccer franchise, Indy Eleven, is also the owner of Keystone Construction, which heisted the $ from the city for the Broad Ripple parking garage.

So basically he got free money from the city and used to to buy the soccer franchise. Soon, he will be demanding the city build him a stadium and no doubt, we will.

That may be part of it- jumping in to reap from the spoils but the real story is Democrats and the "culture" you can't condemn that ran the city for decades stealing and robbing it blind elected with zero ability to run a government. Truth hurts.

Paul - You forget that Detroit apparently does not have a cricket championship coming up. Surely that will make all the difference.

Greg Garrison is a way too partisan-Republican. What a silly remark he made on WIBC.

Is it true that while running for president, Ross Perot said that once Detroit falls, Indianapolis will not be far behind? Great report, Paul.

Super post, Most of us take pleasure in any individual and her or his fantastic post. Your own post is reasonably beneficial in my opinion. I want to view the subsequent post. Kind regards about producing. Michigan Investment Property