Will Council Republicans Jump Off the Political Cliff With Indianapolis Mayor Ballard?

It appears that possibly the local Democrats are getting smarter. I have said before that former Democratic Marion County GOP Chairman Ed Treacy blew the 2011 election, not only by losing the Mayor's race but by losing four council seats to Republicans in majority Democratic districts.  Due to an upset in Republican Susie Day's Beech Grove district and the Democrats, as expected, sweeping the at-large seats (which have now been eliminated by state law), the Democrats have been able to withstand the defection last year of Pike Township's Jose Evans to hold a 15-14 majority in the council. 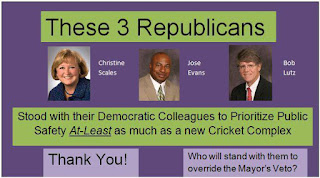 It shouldn't have been nearly that close though. While Treacy can't be completely blamed for the failure of Melina Kennedy to aggressively pursue issues that would have driven up Ballard's negatives, the fact is Treacy had control of the council races and, in those races, he chose not to attack their support of the Mayor's misplaced priorities and corporate welfare.  For example, just a couple direct mail pieces noting Councilor Janice McHenry's support of tax increases and $33.5 million for the Pacers the same week library hours were being cut for lack of funding, could well have ended her representation of that northwest side Democratic district.   But instead, Treacy kept the powder dry.  The only real exception was in Christine Scale's, slightly, Democratic district, and she was actually attacked by her Democratic challenger for not being sufficiently supportive of Republicans Mayor Ballard's downtown, corporate welfare agenda.

The Democrats though now have a new county chairman, Joel Miller, who seems more skilled than Ed Treacy when it comes to basic political strategy.  They also have on the team Democrat Zach Adamson who understands the role of the "out" party when it comes to defining the incumbent Mayor prior to the election window opening.  In particular, Adamson saw the Mayor taking $6 million from the Rebuild Indy fund for a cricket park on the east side of Indianapolis, and smartly offered an amendment to an ordinance to take $6 million from the fund for a police recruitment class.  Adamson knew if the Mayor took the bait, it would make for a devastating 30 second television ad.  While pictures and stats of violent crime cross the screen, the ad will bring up the fact that the Mayor vetoed $6 million for new police officers while he instead chose to spend $6 million on a cricket field.   The Mayor's defense of his action would be too long for the debate.  Councilor Adamson and the Democrats dangled the bait before the Mayor and sure enough he took it.

We will see though if the sudden rise in political craftiness on the part of Democrats will translate beyond the Cops v. Cricket debate.  Another chance to define the Mayor is coning.  The Mayor and Republican leadership on the council are planning to eliminate the local Homestead Tax Credit, which would result in the rise of property taxes for many residents.   Raising taxes, especially property taxes, is hugely unpopular. While Republicans have an explanation for why they want to eliminate the tax credit, at the end of the day it is still a tax increase and makes for an excellent 30 second spot for Democrats.  The Republican explanation for the elimination of the tax credit is way too long.  If the Democrats can hold together their caucus to vote against the elimination of the tax credit, a big "if," they will have another slam dunk political issue going into 2015.

Republican councilors would be wise not to accept Mayor Ballard's invitation to commit political suicide by jumping off the political cliff on Crickets v. Cops and the property tax increase.  Three Republicans - Christine Scales, Robert Lutz, and Jose Evans - voted for the $6 million for a police officer training class.  Other Republicans should join them in a veto override and thus avoid the inevitable political allegation that they chose cricket over cops.  To vote on the wrong side of those two issues will certainly mean a Democratic Mayor and Democratic-majority Council come 2016.
Posted by Paul K. Ogden at 1:38 PM

Sir,please catch that wave-the one over there-has wiped away my sand castle.What do you mean that wave has become another wave.An the old one that is no longer the present one.How can i make a wave responisable So?

Sir,please catch that wave-the one over there-has wiped away my sand castle.What do you mean that wave has become another wave.An the old one that is no longer the present one.How can i make a wave responisable So?