Will Anyone Ever Park In the Broad Ripple Parking Garage? 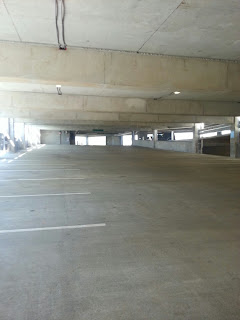 Since the Broad Ripple Parking Garage opened a few weeks ago, I have been wanting to stop by and see how utilized the parking garage is.


It has long been my suspicion that we, the public, did not pay to build a garage with some commercial space in Broad Ripple.  I think we paid to build a commercial building that has parking.  While originally the plan was to have only 20% of the garage for commercial space, that was quietly changed to 36%.

When I walked into the garage on Thursday at 5 pm,  I noted the sign that said parking the first hour cost $2.00.  That is more expensive than parking on the street on Broad Ripple Avenue which is $1.50 an hour.  On my way to the garage, I noted numerous empty spots available on the street.


On the first floor I noted a few scattered vehicles. But those were trucks which appeared to be owned by workers putting the finishing touches on the building.  On the second floor, where the public is to park, it was completely empty.

I saw no sign of the IMPD substation.  Pursuant to the city's contract with Keystone and its partners, the $6.35 million paid by the City (which came from the $20 million paid by ACS for the 50 year parking meter deal) is explicitly for the purpose of paying upfront a 10 year lease for the substation.  After that, the City is to pay rent at market rate for the substation. From Day 1 though, according to the contract, the City has to pay prorated utilities for the IMPD space.

Now Broad Ripple is considering a residential permit program.  One of the reasons apparently is the desire to driver vehicles into the garage to justify Keystone and its allies "investment" in the garage. But as I have indicated on these pages before, the contract actually did not require Keystone to contribute anything to the project.  The repeated public claims that it is a $15 million garage is not backed up by any evidence and is unlikely considering like sized garages with 340 or so parking spaces are generally in the $5 to $7 million range.

The deal stinks from top to bottom.  I'd be surprised if the Broad Ripple Parking Garage is not on the FBI's radar.
Posted by Paul K. Ogden at 6:08 PM

"I think we paid to build a commercial building that has parking."

Duh. Never let someone else the terms. The Republican scum did this when they sold off the Toll Road, calling it a "lease." Soldier Field was utterly demolished and a new stadium rebuilt, but because they left the colonnade in place, they called it a "renovation."

The FBI, Hogsett, and others will never put Ballard in jail, because the people behind Ballard hire for and control jobs that the kids of those working at the FBI and U.S. Attorney's office would like to hold. In Indy, all the people who matter are socially enmeshed.

Individuals include varied creates consequently they are crafted and fit the needs about varied fake chanel bags, shapes and sizes as well sizing. Staying many different breathing difficulties in view, all the new replica rolex really are created to defend and additionally rescue all the appliances just for usb causes harm to. All of the replica chanel handbags really are thouroughly tested prior to when serving the property to absolutely free themes. All the replica hublot watches need to ensure of the fact that enterprise measures really are succeeded and additionally true plate and additionally documentation must remain in that respect there to by means of advanced superior quality formulation about static. The 2 main major essential types of all of these handbags really are Metal-In Static Protecting Handbags and additionally best replica gucci bags. The root impact is based on all the ınner shiny steel blackout lining about both handbags.