Supreme Court Strikes Down DOMA on Case That Relies on Equal Protection, Federalism

I have had a chance to read the majority opinion in the case, United States v. Windsor, in which the United States Supreme Court today held that the Defense of Marriage Act (DOMA), or rather the section of the law in which the federal government defines marriage as between a man and woman for purposes of handing out federal benefits, to be unconstitutional.  I have also made my way through the dissenting opinions. 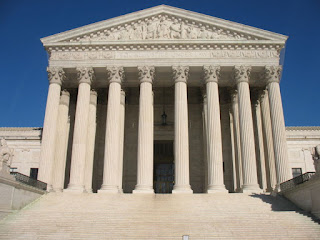 When reading United States Supreme Court opinions I am reminded of my boss, the late Paul H. Buchanan, Judge of the Indiana Court of Appeals, preaching that his clerks write with brevity and conciseness.  I guess when you achieve the lofty status of United States Supreme Court Justice the need to be brief and write so people can understand what you are writing about gets lost.  Way too much rambling is going on in these opinions.   At least with Justice Scalia you get clever quips along with his lengthy prose.

For me, the issue of the constitutionality of the Defense of Marriage Act, is an easy one.  It is about federalism.  Under our constitutional system, states, subject to constitutional guarantees (such as that recognized in Loving v. Virginia, the miscegenation case), get to define marriage.  If states want marriage to be defined to include same sex couples, so be it.  But DOMA sought to severely undermine the choice states were making to legalize same sex marriage.  As a conservative who believes strongly in the wisdom of the framers in adopting a federal system of government, I found that offensive.

Justice Kennedy, joined by the four liberals on the court, wrote the majority opinion in Windsor.   While Kennedy's opinion gives some pretense of being about federalism, the holding suggests that DOMA is unconstitutional by infringing on the "equal liberty of persons that is protected by the Fifth Amendment."   Ah, that odd duck known as substantive due process.   Throughout the opinion, Justice Kennedy confusingly discusses the  encroachment of federalism through the guise of the Equal Protection and Due Process Clauses.  There was no need to do so except probably to secure the votes of the liberals on the court who are generally opposed to federalist principles.

Justice Scalia, in dissent, suggested the construction of Kennedy's argument was done so a "second, state-law shoe [could be] ... dropped later, maybe next Term."   Translation:  Scalia believes that next year the Supreme Court will use Windsor to find that state laws not allowing same sex marriage are unconstitutional.  Possibly, but I just don't think the votes are there for a sweeping decision that imposes a policy decision on the 50 states..  I think the Court will want to let the political process in the states play out.

In the dissenting opinion conservatives found there was no standing,  That standing issue arose when the Obama administration announced it would not defend in Court the challenged portion of the DOMA, while at the same time enforcing DOMA to deny federal benefits to same sex couples.  But once that was disposed of and the dissenters proceeded to discuss the merits, they weren't ready to stand by the federalist principles they so often defend vigorously defend.

I think the conservatives would have been much better off voting to overturn DOMA on federalism grounds (which approach I think Justice Kennedy would have readily endorsed) and letting the liberals join the majority conclusion via a concurrence that eschews the federalist approach.  The result would have been a stronger, more rational opinion that could have been used in later federalism cases.  Instead  conservatives on the Court ended up with a confusing equal protection opinion that could act as a catalyst for challenges to state laws prohibiting same sex marriage.
Posted by Paul K. Ogden at 4:30 PM

Please, Paul, it's time to stop the farce. The Constitution is dead. The Supreme Court is just another legislative body that uses the tenuous jurisdictional anchor of the Constitution to allow it to enact and pass whatever laws they wish.

They usually don't bother justifying their laws against the Constitution, preferring merely to cite their other laws as foundation for the new laws.

That branch was a bad idea, and we should amend the Constitution to repeal Article III.

Now it's time to work on the inequality felt by the unmarried.

Surely they are not married because it is who they are and not by choice.

This growing segment of the population is unfairly singled out and denied equal treatment to married people.