Many of us are eagerly awaiting the announcement of the Court's decision in United States v. Windsor.   At issue in that case is the part of the Defense of Marriage Act that defines  “spouse,” and “marriage,” for all federal purposes, to exclude same-sex couples.  The result of that law is that many federal benefits, such as tax benefits, are not available to same sex couples even though they are legally married in states that allow same sex marriage. 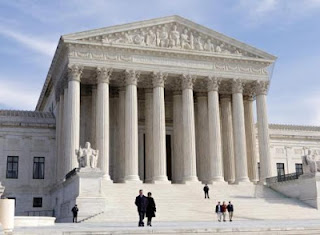 The betting is that some conservatives justices, mindful that DOMA undermines federalism, will join liberals on the court for a strong majority finding that the challenged portion of DOMA is unconstitutional.  At least that's my bet.

The win on DOMA would be huge.  Congress passed the law just 17 years ago and signed into law by President Bill Clinton.  Now I expect it will be gutted by a coalition of conservatives and liberals Supreme Court justices.

First of all, those advocates need to low their expectations.  I doubt that more than two justices on the Supreme Court would vote to say the right of same sex couples to marry is guaranteed by the Constitution.  With raised expectation about the larger issue, same sex marriage advocates will look at anything less, such as a striking down of key parts of DOMA, as a loss. They shouldn't.  It would be a huge, huge win.

But, second, while the Supreme Court declaring a constitutional right to same sex marriage would set off victory celebrations, the victory would be short-lived.  Politics is like physics. For every reaction, there is a reaction. Just like Roe v. Wade strengthened the pro-life side, the victory at the Supreme Court for those advocating same sex marriage would strengthen the side opposing that right.

In Roe v. Wade, the United States Supreme Court used an extremely tortured interpretation of the Constitution to short-circuit the political system and impose a certain policy view (abortion on demand for the first two trimesters) which at that time was accepted in only a handful of states.  The decision has never been accepted as legitimate by a sizable percent of Americans, and never will be.  Even liberals on the Supreme Court such as Justice Ruth Bader Ginsburg admit Roe v. Wade was a mistake at the very least in terms of timing, i.e. the Court imposed a political decision on the country that people were not ready to accept.

As slow and ugly as our democratic institutions can be, they are the way of achieving consensus and imparting legitimacy on policy decisions.  Same sex marriage advocates are routing opponents in legislatures all over the country.   Polls show soaring support for same sex marriage, especially among younger people.  Advocates are winning the issue where it should be won - in the political process.
Posted by Paul K. Ogden at 9:49 AM

I'd prefer that the states get to decide who gets to be married within their borders, but that once you're "married" within a given state's borders, you're considered married within all states borders. That seems to preserve State Rights, but at the same time, doesn't open up the question of whether State 1 can ignore State 2's marriages. The alternative seems to put a real constraint on being able to relocate across state borders, and I'm sure we don't want that to happen.

Honestly, I'd like to see government get out of the marriage business altogether, and allow folks to contract a much broader range of issues themselves. Most of current marriage laws seem to codify what various religions expected out of marriages, but there's no reason members of respective religions couldn't require that their members voluntarily restrict what they contract. Since that avenue requires government to re-think a lot of what it currently does, I don't expect it to happen - just think it makes sense.

The states should have no power to regulate who marries, and so it is proper for the court to strike down discriminatory laws. There will be no lasting hue and cry because the issue is not life and death.