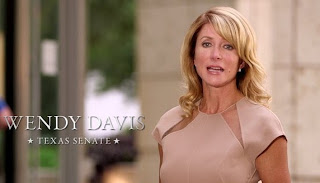 The far, far left has found a new hero, a Texas State Senator from Ft. Worth who successfully filibustered an abortion bill that would outlaw abortion after five months in the Lone Star State and would require abortion clinics to meet certain regulatory standards to avoid the "House of Horrors" clinic run by Philadelphia's Dr. Kermit Gosnell, who specialized in late term abortions   The conditions at Dr. Gosnell's clinic included broken equipment, bloodstained recovery chairs and an untrained staff giving anesthesia and other drugs.  As reported by the NY Times:


The scathing grand jury report in 2011 on Dr. Gosnell’s clinic, the Women’s Medical Society, on Lancaster Avenue, detailed how despite complaints and malpractice suits, no inspector had visited in 16 years. The clinic was raided only after a tip that it operated as an illegal prescription mill. A month after the report, Gov. Tom Corbett fired six employees of the Health and State departments.

The NY Times continued its report on what happened at the late term abortion clinic, the very type of abortions that Wendy Davis filibustered to preserve:


In the witness box, clinic employees said live births occurred regularly, and they believed Dr. Gosnell’s explanation for snipping necks with surgical scissors — to “ensure fetal demise” — was accepted practice in late-term abortions. An abortion doctor who testified for the prosecution said such practice was unheard of.

One witness, Steven Massof, testifying under a plea agreement to avoid first-degree murder charges, instructed jurors to feel the backs of their own necks and said, “It’s like a beheading.”

Another former employee, Adrienne Moton, sobbed as she described the death of Baby A, aborted when his teenage mother was about 29 weeks pregnant. Ms. Moton was so upset she took a cellphone photograph of him, which was shown in court. She said Dr. Gosnell had joked that the baby was big enough to walk to a bus stop.

Ms. Moton, who also testified under a plea agreement, said she cut the neck of Baby D, who was delivered into a toilet while its mother, given a large dose of a drug to dilate the cervix, waited for Dr. Gosnell to arrive.

Another clinic worker said she followed Dr. Gosnell’s instructions and cut the neck of Baby C after it moved an arm. The doctor told her was an “involuntary movement.”

During my second year of college, I had to write a research paper in a health science class.  The topic I chose was prenatal life.  What I learned during my research was that life growing inside a woman is not just a clump of cells as pro-abortion rights advocates usually try to insist.  Here is a description of an unborn child's development, weeks 9 through 28.
Even most strident pro-abortion rights supporters balk at abortions at more than three months in, especially if they understand anything about pre-natal development.   But not Wendy Davis.  She is fighting to preserve the "right" to terminate the life beyond 22 weeks, by a gruesome procedure too graphic to describe here, of a very well-developed unborn child.  She is certainly no hero.
Posted by Paul K. Ogden at 8:33 AM

I don't like the government telling women what they can and can not do with their bodies. How is that small government? That's the exact opposite of small government. Abortion is ugly, if you're against it don't have one. If someone else chooses to have one it should be between them and their doctor and really non of your god damn business. Abortion will never go away, as gruesome as the office was in Philly it's still better than a hanger in an alley. Republicans need to kick their religious American Taliban to the curb if they want to win in the future.

I apologize for my spelling and grammatical errors, but you get the idea of what I am saying. You're not a doctor Paul, stop trying to play one. Get the fuck out of my doctor's office. It's funny how republicans warn of us Sharia Law but then want everyone to live by their Christian Law/morality. Fuck off.

I've no problem with abortion, with a few limits. But Davis is no hero for a more prosaic reason: her political calculation is that it will help her win money and votes. Vanishingly few politicians take positions for reasons of principle. If the typical politician woke up in a jurisdiction populated by voters whose views were inverse to those he had been representing, he'd immediately invert his positions to accommodate them. As Mencken more amusingly put it:

"In the animal kingdom, the rule is, eat or be eaten; in the human kingdom, define or be defined."

Is "Sadie Pepper" as adamant that the government should get out of doctor's office when it pays for birth control, regulates drugs, and licenses doctors? I am, but I'll be "she" isn't.

Nic, I've read some of your comments on older posts. You're a clown. Your opinion is meaningless to me, and I'm sure not just me.

Sadie sez: "I don't like the government telling women what they can and can not do with their bodies."

What is it with you Republican men who think that a woman can't make a decision about her own body? Abortion is never "easy" but it is a woman's personal decision -- not that of some GOP legislator!