Mythbuster: Hurricanes and Tornadoes are Not Increasing in Number or Frequency

Over at the Civil Discourse Now blog, Mark Small as usual is up early spewing nonsensical nonsense:


We used to have real autumns, periods before winter, of several weeks, during which deciduous trees turned spectacular colors. Now we seem to go straight from summer to winter. Summers used to get hot around mid-July. The hottest time was in mid-August. Now we heat up in May.

The temperatures of the planet have increased more rapidly than at any time during human existence. Things become even more complex. With massive changes in temperatures have come chaotic changes in storms.

Yes---the huge tornado that hit Oklahoma last evening is an example of the effects of global climate change. The droughts and heat waves of the past ten years are part of the ecological shift caused by humans' efforts to spew crap out into the environment.

For 4.5 billion years this planet has cycled through short and long term heating cooling trends.  The short term trends last tens of thousands of years.  The long terms trends last hundreds of thousands if not millions of years.  A human being on this planet, who lives to say 80 year, will only see a tiny, tiny fraction of that time. The notion that that human being can use observation during his life to make long-term conclusions about the direction of the environment is, well, preposterous. 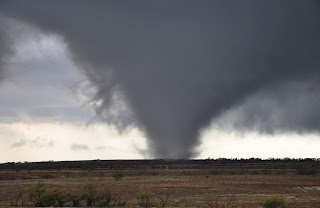 Of course, the alarmists prefer now to use the word "climate change" (actually "global climate change" sounds more ominous) instead of "global warming" because they know that the climate is always changing and thus they can never be wrong.  I refuse to take that bait about redefining the debate. They're talking about global warming...that's their claim.

Mark says we're heating up in May.  That's funny.  I almost had to turn on the heat this morning it was so cool.  Or let's forget that for most of the past nine months we've had below normal temperatures in Indianapolis.   Of course such short term looks at the weather as emblematic of long term trends is nonsense.  But if the alarmists are going to do it every time they want to try to prove global warming, they should expect those same tactics in return.

But what about the increase in hurricanes and tornadoes?  Isn't that proof global warming is happening, that we're wrecking the environment?

Well, here's the thing.  The data and scientists do not support the premise.
In a 2011 Fox News article:


A top official at the National Oceanic and Atmospheric Administration (NOAA) rejected claims by environmental activists that the outbreak of tornadoes ravaging the American South is related to climate change brought on by global warming.

Greg Carbin, the warning coordination meteorologist at NOAA’s Storm Prediction Center in Norman, Oklahoma, said warming trends do create more of the fuel that tornadoes require, such as moisture, but that they also deprive tornadoes of another essential ingredient: wind shear.

“We know we have a warming going on,” Carbin told Fox News in an interview Thursday, but added: “There really is no scientific consensus or connection [between global warming and tornadic activity]….Jumping from a large-scale event like global warming to relatively small-scale events like tornadoes is a huge leap across a variety of scales.”

Asked if climate change should be “acquitted” in a jury trial where it stood charged with responsibility for tornadoes, Carbin replied: “I would say that is the right verdict, yes.” Because there is no direct connection as yet established between the two? “That’s correct,” Carbin replied.

The claimed increase in tornado and hurricane activity is simply not happening.  In a Forbes Magazine article earlier this month: 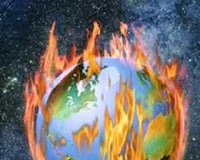 The new tornado record is particularly noteworthy because of recent advances in tornado detection technology. The National Oceanic and Atmospheric Administration (NOAA) is able to detect more tornadoes in recent years than in prior decades due to technological advances. Even with such enhanced tornado detection capability, the past 12 months shattered all prior records for recorded tornadoes.
NOAA posted a list of the five “lowest non-overlapping 12 month counts on record from
1954-present.” Notably, each of these low-tornado periods occur since 1986, precisely during the time period global warming alarmists claim global warming is causing more extreme weather events such as tornadoes.

According to the Forbes magazine article, we've also set records for lack of hurricanes:

Also, as I reported earlier on my blog, a research meteorologist, who supports the anthropogenic global warming theory, did a 100 year study of Atlantic hurricanes expecting that they increased while warming increased.

But, but I can hear Mark saying over his beer...."What about all those other events, the droughts, the fires, ....

The "drought" claim as proof of global warming I find the most interesting.  Mark is being inconsistent by claiming increased droughts and increased tornado activity since moisture is required for a tornado.   Carbin, the "warming meteorologist" at NOAA, confirms this when he says that warming causes more moisture, i.e. "fuel" for tornadoes.  As Carbin correctly notes, the global warming theory is that the United States will receive MORE precipitation in the United States because of warming, not less.

But is Mark right that we're having more droughts than ever?  Nope.  Again according to Forbes:


Soil moisture is in long-term improvement at nearly all sites in the Global Soil Moisture Data Bank. Droughts are less frequent and less severe than in prior, colder centuries.

And all those fires?  Forbes has an answer for that too:


The number of wildfires is in long-term decline despite a recent change in wildfire policy that no longer actively suppresses wildfires. Just about any way you measure it, extreme weather events are becoming quite rare.

Facts are inconvenient things.  It's so much easier to rely on anecdotal evidence to support the global warming alarmist theory than to rely on objective facts to support that theory.
Posted by Paul K. Ogden at 10:22 AM

i suspect the tornado casualties are more of a numbers game. There are more people living in smaller areas of the tornado belt and when a tornado hits these populous centers bad thing happen. When they hit out in the farm land where there is a small concentration of people a few houses, barns and trees take the brunt of the damage.