Will Senate Bill 621 Wake Up the Marion County Democrats?

My Decatur Township Democratic friend Jon Easter has written several pieces now criticizing Senate Bill 621, which today passed out of the House and is probably on the way to conference committee. SB 621 substantially increases the power of Indianapolis Mayor Greg Ballard.  His latest piece suggests it is time to blame Ballard for the bill instead of the bill's author State Senator Mike Young. 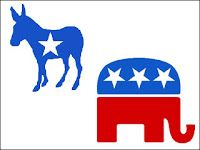 Democrats would be wise to listen to Easter.  Democrats have executed poor political strategy these past several years.  While Marion County Democratic Chairman Ed Treacy gets credit for Democrats winning all the county-wide elected offices, except Mayor, and winning back control of the council, the fact is the Democrats have a strong majority in Marion County.  In the most important election for a Marion County Chairman this election cycle, the municipal election of 2011, Treacy woefully underperformed losing the Mayor's race and losing four baseline Democratic seats.  Democrats should have had 19, possibly 20 seats on the 29 person council. Instead the Democrats ended up with a narrow 16-13 majority, which is now 15-14 due to Jose Evans defection to the Republicans.

While Democratic Mayoral candidate Melina Kennedy did not run a strong race, it certainly wasn't entirely her fault.  It was the responsibility of Treacy and Democrats on the Council to draw distinctions with Mayor Ballard and publicize unpopular positions long before 2011.  Treacy and the Democrats had ample issues to define the Mayor,, including the Pacers $33.5 million giveaway and the Broad Ripple Parking Garage built with $6.35 of the public's money and simply given away to a major contributor to the Mayor.  Then you had the 50 year parking meter deal, in which the City agreed to, for the next 50 years, give away 70% of the revenue to a company for which the Mayor's attorney and then Council President Ryan Vaughn lobbied.  Democrats didn't touch any of the issues during the campaign.

Of course the answer to why Treacy and the Council Democrats didn't attack Ballard for insider deals and corporate welfare is that they support those insider deals and corporate welfare.  Not all of them mind you.  There are a few brave souls on the Council, in both parties, willing to criticize the Mayor for those deals.  But there a distinct minority.

Have the Democrats learned their lesson from 2011, namely the importance of defining the Mayor early on instead of waiting for an election to begin?   I don't think so.   Let's take the CIB tax increases, the measure that passed the Council a few months ago to increase the local car rental tax by 50% and the admissions tax by 67%.   Council President Maggie Lewis and the Democrats could have stood firm, forcing the Republicans to vote en masse for the tax increases, giving them just enough votes to pass by a single vote.  Instead Lewis agreed to give Mayor Ballard and the Republicans 8 votes to match the GOP's 8 votes for the proposal.  The Democrats could have campaigned on Ballard and the Republicans raising the taxes and giving the City the third highest visitor taxes in the country.  Instead they threw away the issue by helping Republicans raise taxes.   Really dumb politics.

Of course, there are also Republicans who oppose SB 621.  The reason why is obvious. It's unlikely the Republicans will have the Mayor's Office after 2015.   The bill is making future Democratic Mayors stronger in relation to the Republicans on the Council.  The bill is trading 2 1/2 years for the long-term welfare of the Marion County Republican Party.

But this article is about political strategy.  Easter is right.  If the Democrats want to win, they need to start holding the Mayor accountability for unpopular decisions.
Posted by Paul K. Ogden at 1:16 AM

Sometimes an old word, words or a song pops into your head. The word that popped into my head was "Spoils System." I recall the term from a long ago history class.

Wiki defines it as, "In the politics of the United States, a spoil system (also known as a patronage system) is a practice where a political party, after winning an election, gives government jobs to its voters as a reward for working toward victory, and as an incentive to keep working for the party—as opposed to a merit system, where offices are awarded on the basis of some measure of merit, independent of political activity.

The term was derived from the phrase "to the victor go the spoils" by New York Senator William L. Marcy, referring to the victory of the Jackson Democrats in the election of 1828, with the term spoils meaning goods or benefits taken from the loser in a competition, election or military victory. [4]

Our present day system does not reward the Voters with spoils, but rather the Crony-Capitalists. Our Current system of Privatization coupled with Campaign Donations and in some cases from the same donor to both Political Parties cements the relationship. Add to this the revolving door between a Government a job and Lobbyists.

The reason the Democrats failed to bring Ballard to task in the last election is we have "untouchable issues" such as Corporate Welfare for Professional Sports teams. We have on certain issues and activities a Republicrat Party in Marion County.