Tonight, aswe stand at the precipice of the Fiscal Cliff, the National Football League regular season draws to a close.  What is the connection?  Well at a time that we're talking about whether the rich should pay a higher share of taxes, it should be noted that wealthiest the NFL, which is classified as a non-profit organization, is exempt from paying taxes.  Jay Bookman of the Atlanta Journal-Gazette explains in a column published this October:


... I did not know that the National Football League, the colossus of professional sports, is classified as a non-profit — a tax-free non-profit, to be more specific. That’s right: The NFL has its own exemption, written into federal law, that makes it exempt from federal corporate taxes. 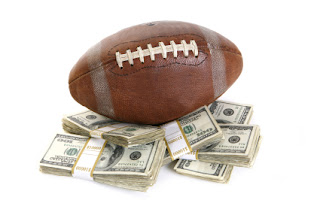 The Professional Golf Association and the National Hockey League, among others, enjoy a similar exemption although in their cases, it is not an exemption specifically written into the law.

As described in Waste Book 2012 — compiled by the staff of U.S. Sen. Tom Coburn, a conservative Republican from Oklahoma:

In 2010, the registered NFL nonprofit alone received $184 million from its 32 member teams. It holds over $1 billion in assets. Together with its subsidiaries and teams – many of which are for-profit, taxed entities – the NFL generates an estimated $9 billion annually.... Almost half of professional football teams are valued at over $1 billion….

League commissioners and officials benefit from the nonprofit status of their organizations. Roger Goodell, commissioner of the NFL, reported $11.6 million in salary and perks in 2010 alone. Goodell’s salary will reportedly reach $20 million in 2019. Steve Bornstein, the executive vice president of media, made $12.2 million in 2010. Former NFL commissioner Paul Tagliabue earned $8.5 million from the league in 2010. The league paid five other officials a total of $19.2 million in just one year. In comparison, the next highest salary of a traditional nonprofit CEO is $3.4 million.

The NFL’s exemption stems from a 1966 law, passed at the time of the merger with the old American Football League, specifically allowing “professional football leagues” to enjoy 501(c)(6) status as tax-exempt trade organizations. Other leagues have piggy-backed on that legislation to claim that status themselves.

Major League Baseball also used to enjoy the same tax-exempt protection, but in 2007 it chose to surrender that status in part because ... tax-exempt, non-profit status requires you to report the salaries of your top executives....

As the Coburn report points out, “state and local governments usually exempt these organizations from state income and sales tax as well….” As the Indiana Business Journal reported, that proved to be a nice little perk when the Super Bowl was held in Indianapolis this year, because “hotels and restaurants … won’t be taxing National Football League employees. They’re exempt from paying, according to an Indiana Department of Revenue directive. The NFL is using its tax-exempt status as a 501(c)(6) to avoid paying the taxes, in addition to fuel, auto rental and admissions taxes.”

The article doesn't mention it, but the NBA is also classified as a tax exempt, non-profit organization.  The Pacers play in an arena exempt from property tax because it is technically owned by the Capital Improvement Board.  Although the public have paid to run the place to the tune of $10 million a year, the Pacers receive 100% of the revenue from the building.
Posted by Paul K. Ogden at 1:03 AM

“There are 47 percent of the people who will vote for the president no matter what … who are dependent upon government, who believe that they are victims. … These are people who pay no income tax. … and so my job is not to worry about those people. I’ll never convince them that they should take personal responsibility and care for their lives.” -Mitt Romney.

The Leadership of the NFL would seem to be in the 1%.

And major league baseball is exempt from anti-trust regulations, the NCAA is non-profit, the NBA is tax exempt as well. For whatever reasons sports receive a pass on a lot of things that the majority of us have to endure.

The NFL won't pay taxes because it is a part of the government and serves an incredibly useful military, educational, normative and conformist role.

The government could never hope to conjure a program that serves to create obedience and tribalism as well as the NFL does. A little tax break is a small price to pay for such a huge benefit.

I am an American man, and I have decided to boycott American women. In a nutshell, American women are the most likely to cheat on you, to divorce you, to get fat, to steal half of your money in the divorce courts, don't know how to cook or clean, don't want to have children, etc. Therefore, what intelligent man would want to get involved with American women?

American women are generally immature, selfish, extremely arrogant and self-centered, mentally unstable, irresponsible, and highly unchaste. The behavior of most American women is utterly disgusting, to say the least.

I encourage ALL American men to NEVER MARRY American women, and date/marry only foreign (non-American) women.

Tens of millions of American men have had their lives completely destroyed by American women through the following crimes:

4. Financial destruction of men in divorce courts through alimony and support payments (women get up to 95 percent of their ex-husband's income and savings, as well as the house, car, etc)

5. Emotional destruction of men by ex-wives who have stolen their children from them and forbidden the fathers from having custody or contact with their own children

6. Divorced dads who commit suicide as a result

A few more reasons to stay away from American women?

-25 percent of American women take psychiatric drugs for mental illnesses.
-25 percent of women under the age of 30 have at least one STD.
-85 percent of divorces in America are INITIATED by women, thus women are responsible for the vast majority of divorces.
-70 percent of criminals in America were raised by single mothers, thus feminism is responsible for most crime in America.
-The majority of child molestation, child abuse, and child murder in America is done by WOMEN.
-American women are NINE TIMES more likely to murder their own children than the biological father

If you want to get married, find a nice foreign girl from Asia, or South America, or Russia/Eastern Europe. DO NOT MARRY AN AMERICAN WOMAN UNDER ANY CIRCUMSTANCES!

Over 50 percent of American women are single, without a boyfriend or husband; so the fact is most American men no longer want to marry American women. Let these worthless American women grow old living alone with their 10 cats.

Give American women the husband they deserve- NONE!

Thanks for sharing in the last of the post this point (6) to avoid paying the taxes, in addition to fuel, auto rental and admissions taxes
cheap car rental dubai