On Monday, September 24, 2012, I did a detailed analysis on my blog of all the state polls, breaking out the undecided votes using a well known political science concept that, in an election involving an incumbent, the undecided vote historically breaks for the challenger anywhere from 60% to 80%. 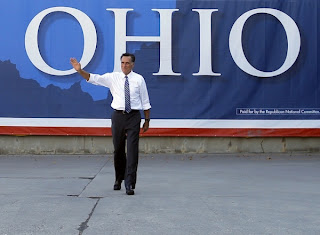 A lot has happened since I did that analysis.   Mitt Romney made his 47% comment which sunk him in the polls briefly.  There were also three debates.  I decided it was time to revisit that analysis and update.

To refresh the readers' memory, in September I looked at the recent average of the polls in the states and employed a 67% advantage to challenger Romney for the undecided vote.  When that 67% factor was applied to the undecided vote, I found President Obama winning the electoral college 337-201.  However, when I upped it to 72%, I found that the states of Colorado, Florida, Nevada and North Carolina all flipping to Romney, making the electoral vote spread being reduced to 278-260 in favor of President Obama.   In September, I noted that one state, Ohio, would give Romney the victory utilizing the 72% analysis, if 32,833 voters in Ohio flipped their vote.

In revisiting the analysis using updated numbers, I found that the undecided vote declining in every battleground state.  I also found the race much closer using the 67% analysis (which I prefer in this race.).  The states of Colorado, Florida and North Carolina are now in Romney's column at 67%.  Although Virginia wasn't at the tipping point in the September survey, it has now moved from the Obama to Romney column.  In Nevada, while the President's lead hasn't increased, he is now at 50% in the average of polls in that state.

Interestingly New Hampshire, which in September was, perhaps surprisingly, narrowly in the Romney column, still goes to Romney by a scant 50.014% to 49.086% margin.  That amounts to 196 raw electoral vote difference, or 99 people changing their minds from the winning to the losing candidate.   As New Hampshire only has 4 electoral vote, it is unlikely to be the state that makes the difference.

If the undecided vote breaks 72% for Romney, Ohio switches to Romney.  Iowa and Wisconsin get close but fall just short.

This is, on paper, the closest election I have ever witnessed.
Posted by Paul K. Ogden at 12:49 PM

Romney sure could use those conservatives so disenfranchised by the GOP, that they are switching support to Gary Johnson.

I've heard Johnson could get as much as 13% of the vote.

If Gary Johnson gets over 4% of the vote, I'll be shocked.