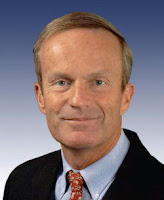 That poll also took a look at the U.S. Senate race in that state.  Democratic incumbent Claire McCaskill holds just a two point lead (45-43) over Republican Congressman Todd Akin.  That's well within the margin of error.  It should be emphasized that the undecided voters historically break sharply for the challenger, i.e. Congressman Akin.

I still think Akin is going to lose that race.  But Democrats have to be troubled over this latest poll from Missouri.

No so sure about that, Paul. Aiken may benefit from the fact that more time has passed since his controversial statement. There have been some bombshell disclosures about McCaskill's husband's business dealings that benefitted from the government that were hammered out right in the Senate dining room. Before Aiken's controversial comments, she was already well below 50 percent in the polls, and she seems to have stayed belowed 50 percent since he made those comments.

Good point, Gary. FYI, I corrected the spelling of Akin's name. I always spell it wrong.

Is a correction needed? Obama LOST Missouri in 2008 by a little less than 4000 votes.

If Akin is defeated, it's God's will.

Well, why do we even have elections, if everything that happens is God's will?

Thanks, Art. I shall correct. Just now seeing your comment.