Why I Hate Fall

The bad thing about Indiana is that it is filled with people who actually like this season. They talk about the chill in the air, being able to put on a sweater, have a cup of cocoa, and watch the leaves turn. 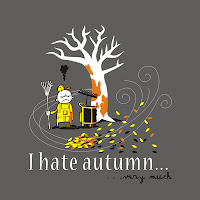 To me it is the season of death, a time when everything that was alive and growing over the Spring and Summer is starting to die.  Fall months are filled with cold, overcast, gloomy days. It is the rare Fall day when the sun is shining bright, warming everything up.  It doesn't help that, growing up, the bad things in my life - my father's illness and his passing away, and my mother's illness (from which she thankfully recovered) all happened in the Fall.  I associate the Autumn season with bad things happening.

But what about Football?  Sure I like watching the NFL, but the end of Summer also ushers in the end of my favorite sport, baseball.  Although the baseball playoffs occur in the fall, by the time they end it is generally on the verge of snowing.  Baseball is a great Summer game.  But it is a miserable game to play and watch when it is cold.

But the leaves are turning different colors...they are so pretty!   Let's drive to Brown County and see the leaves!.  Bah, humbug.  I grew up in southeast Indiana, in a county that has a landscape much like Brown County.  I know what Fall leaves look like.

But what about Halloween...isn't that a great holiday?  I loathe Halloween.  (See my Halloween! Bah Humbug! column of a couple years ago.)  I'd rather have a root canal than dress up and go to a Halloween Party.  I generally find "scary movies" to be boring.  But the worst thing of all is when children, complete strangers, come knocking on my door demanding "treats" lest they play a "trick" on me.  That is called extortion and it is a crime.  Get off my lawn, kids!

The worst thing is that Fall is the gateway to snowy, bitterly cold Winter which I detest even more..  But at least with Winter, unlike Fall, you have the promise of Spring just around the corner.

I love Spring. The season represents new beginnings.  All of nature greenery that died in the previous seasons is reborn in the Spring.  Things that happened good in my life - new jobs, new opportunities - almost all happened in the Spring.  So I associate the season with favorable personal experiences.

I also love Summer.  Even the extraordinary heat this year didn't bother me.  I'll take a 100 degrees over zero any day of the week.  Love hot weather. There is a reason that people move South to retire versus going North.  As you get older, you appreciate the cold weather of the Midwest less and less.

Yeah, Fall is here. Big whoop dee doo.  My Autumn plans  are to watch my Reds win the World Series then go into hibernation until spring training starts in the Spring.  As far as the Fall and Winter seasons, wake me when they're over.
Posted by Paul K. Ogden at 12:06 PM

Life's too short to live somewhere you don't like.

Really. Life is too short.

Trust me if it were that easy to move I would have have a long, long time ago. Being a lawyer makes it very hard to relocate. The legal profession is very parochial. I don't have the money to just pick up and move, take the bar someplace else, then hope I pass it and can get a job. Even those states which allow you to waive in on motion, are much, much more difficult to get into once you look at the process. For example, some states require you have a job already lined up. However, very few law firms or companies are going to consider anyone who isn't already licensed in the state.

I spent a long time looking into moving. I know the reciprocity rules inside and out. Found moving as an attorney was next to impossible unless I wanted months of unemployment at the very least. Moving and leaving the legal profession but the problem is once you become a lawyer that cuts off other job opportunities

Life is too short to look out on a part of the world that you don't want to live in.

Autumn is my favorite season.

Spring is my second favorite season, provided enough bulbs were planted in the fall to make my spring visually spectacular.

All the reasons Autumn is my #1 season:

3. Implementation of my bulb planting plans to ensure a gorgeous spring

7. Lift of water and bonfire bans

8. Hunting down the best winter firewood buys to fuel my gorgeous EPA-rated wood stove which saves $400 on the monthly gas bill

Paul Ogden has written a blog demeaning the month of Autumn. He told me, yesterday, he was then writing such a piece. I feel compelled to defend what is my, and other people’s, favorite season, although other people (notably members of tribes indigenous to this continent when Europeans arrived) would wonder how anyone could hold as a “favorite” one of the natural phases of our calendar.
First, Mr Ogden mischaracterizes autumn as a season of death, marked by cold, overcast, gloomy days. Au contraire, Monsieur Ogden, many days of fall are sunny and clear, with the crisp chill that makes one feel alive. If one wishes to look at a season of death, look at the spring. Statistically, suicides are higher in spring than any other season. The days of March and April hardly are sunny and fresh. Such days in those months are rare. Rather, March and April are dominated by gray skies temperatures in the 40s, and humidity on the verge of standing water.
Autumn brings football. Football is good, unless one is a Marion County taxpayer (Go Colts®!), a fan of the Cleveland Browns® (sorry, Jeff), or still suffering from post-concussion syndrome as a reminder of the idyllic days of high school when one strapped on that helmet that did little good.
Mr. Ogden, I believe you know I agree with you about most things related to baseball. The playoffs should not occur during snow flurries. The World Series ® should be over by the end of October. Double-headers should be brought back. Therefore, I shall agree with you on that portion of your otherwise ill-chosen diatribe.
You complain about people who praise autumn because the leaves (of the deciduous) trees do not really turn colors. You offer no evidence for this assertion. I would further respond by pointing out the leaves once always turned beautiful colors: red, gold, yellow. Unfortunately, since we have had such massive climate change—I know, you believe such environmental realities only imaginary—summers have had less rain and thus the trees are less prone to change colors. So on the one hand you provide no evidence for your position; on the other, if such a phenomenon is extant, those (such as you) who oppose environmental progressives (such as me) are partly to blame.
Next you criticize Hallowe’en. It is not my favorite holiday, either. My favorite holidays are occasions upon which adults imbibe heavily of alcoholic beverages—St. Patrick’s Day, the Fourth of July, any day with an “r” in it, my birthday. If you have such a problem with the children who go door-to-door, hit a bar for the early evening hours. If you are bummed out by the movies, go to the obsolete technology section at Goodwill and buy something called a “VCR.” In that way, you can record whatever non-Hallowe’en fare you wish (say, the last game of the playoffs during which the Reds choke).
You speak of autumn as some sort of Gateway to the Snow. Again, these days maybe not so much. Soon we might speak of temps in the 90s in December. In the meantime, I love the changes of season. I love watching snow fall. I might one day keel over from a myocardial infarction as I shovel the driveway, but, in the meantime, I do not mind the cardiovascular workout. Besides, we need the snow. That snow melts and helps to build up the water table our farmers will need for summer, and all those golfers at Crooked Stick will need for nice, pretty greens.
As for watching “my” Reds win the World Series, I think you might want to check into some kind of program. I consider you to be a friend. But I believe that, on this point, you border on the delusional. On the other hand, the Cubs have enough young talent on the roster that NEXT YEAR will be THE YEAR. You betcha! Autumn—my favorite season, with its crisp air and memories of college pre-game parties, will bring the Cubs the World Series.

Paul, my favourite parts of February/March are the occasional glimpses of warmth, and the possibility of spring one day. I'd suggest enjoying fall for when it is not fall like and plan a mid-season vacation to someplace warm if you must continue to reside in Indiana.

I looked into moving to Georgia once. As I recall there was a major restriction to waiving in, something like you had to have a job lined up. I could be wrong, but I remember something signficant with respect to the licensing.

Of course, none of that matters if you go sit for the bar. I was looking at places which had reciprocity. There are very states in the south that grant reciprocity. I can't remember Texas' rule.

True life is short, but if I had to do it all over again, for that matter I would have pursued a different career path than law.

Me and you could be pals. I absolutely hate fall. You forgot the other reason to hate fall...fall allergies. I have fall AND winter allergies, but I have no allergy problems during spring and summer. Crazy I know.

I find it funny how deep people take these things. I wish fall could turn into spring and that we could skip winter altogether. I hate winter, I am okay with fall and spring, and love summer. Last winter was always in the negatives and the wind was constantly blowing, so I couldn't go for walks. From this I gained 20 pounds, since the cold increases my appetite. Winter lasted from November-May here in WI.

I am 100% with the author. I loathe fall. It is a faltering neither here nor there season, all about losing ground and dying....and terrible things happened to me in the fall growing up too. I am much better in the throes of winter, even than fall. Yuck. And to boot everyone is so productive in Fall. Why? I feel productive in spring.

Love this! You stated all of the exact same reasons I hate fall...and the exact reasons why I love spring and summer.

I look at it this way, Spring is Friday after I get out of work, Summer is Saturday into Sunday until about noon, Fall is Sunday from noon on, and Winter is Monday morning.