What role will undecided voters play on the outcome of this year's presidential race?  It appears a very significant one. 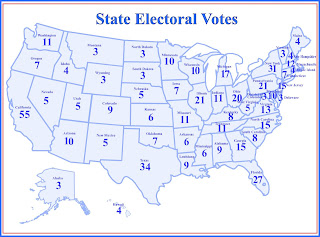 I spent hours crunching the numbers to try to find out.  I looked at poll numbers in each state as well as how many people were undecided about the outcome.  I then employed a well-known concept in political analysis, namely that, when there is an incumbent in the race, the undecided vote on election day goes disproportionally to the challenger.  The amount of undecided vote the challenger receives runs from 60% on the bottom end to 80% on the top end.  Occasionally you have elections where that model doesn't hold true, but the vast majority fall within the 60% to 80% range.

I reviewed the Real Clear Politics average of polls in each state.  There were a handful of states were there had been little polling and thus no average.  In those states I went with the latest poll.  Then there were a few states where there had been no reported polling.  Those states are so solidly Republican or Democrat there wasn't any reason to poll.

In the first screen, I used 67% of the undecideds going to Romney calculation.  Here is who won battleground and their percentage.  Electoral votes are in parenthesis:

*These "other" states are battleground states, but not quite as close as the others.  A detailed analysis was not needed to determine which column they would land in even when undecided vote figure was adjusted from 67% to 72%.)

But when the undecided split is moved to 72%, still well within what can be expected, Colorado, Florida, Nevada and North Carolina all move to the Romney column and the Electoral College race closes to 278-260 in favor of President Obama.

Ohio, which would let Romney flip the Electoral College result of 278-260 to his favor, falls just short at 49.38% when the 72% figure is applied to the undecided votes.

This further re-enforces the whole 2004=2012 election narrative. A very close race that was largely campaigned on with motivating the base rather than bringing in independents, and a win in Ohio. John Kerry lost Ohio by 100,000 votes. If he had won Ohio, he would've been President.

I wrote that before a slew of battleground polls today that showed Pres. Obama with an expanded lead in virtually every state.