Neil Armstrong, First Man on the Moon, Returns to the Heavens; Are We on the Verge of a "Gold Rush" to the Moon?

The old photograph at first glance isn't anything special. It shows a couple young boys, lying on their stomachs on the floor watching a flickering black and white television.   When I saw the picture a few years ago, I at first didn't know what I was seeing.  I couldn't figure out why anyone would take a photograph of boys watching television.  Then I looked closer at the TV and saw the now familiar image of Neil Armstrong emerging from the Apollo Space craft to take his first step on the moon.  Then I remembered my mother had told me she wanted a photograph of us watching history being made.  I had never actually seen the picture until then. 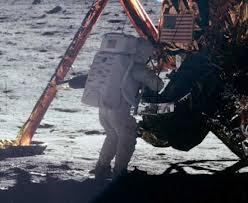 Upon the news of Armstrong's passing, I looked unsuccessfully for that photo. I wanted to be reminded of my watching Armstrong's famous first lunar step.  That step, taken on July 20, 1969, I thought marked the beginning of a new and exciting era of space exploration.  Little did I know it instead represented the beginning of the end.  Just 3 1/2 years later, the United States would make its last mission to the Moon, never to return.   The most amazing thing about space travel is not that it happened, but that it suddenly stopped and has remained stopped for forty years.

That may be changing.  I believe that within the lifetimes of most of those people alive today, we may witness a "gold rush" to the moon, led not by miners with pans and pick axes in hand, but by big corporations seeking an extraordinary valuable substance that is rare on Earth but plentiful on the Moon.  Energy Digital reports:


Most people are unaware that our Moon holds countless resources. Some are familiar: titanium, platinum, silicon, ammonia, mercury, and even water (yes, H20 has been confirmed to be present on the moon). But a more elusive substance, which is a rarity here on Earth, is also found on the Moon: helium-3.

Helium-3 is a non-radioactive hydrogen isotope with one neutron and two protons. It is carried through space via the Sun’s solar winds, but burns up as it enters Earth’s atmosphere, making it almost non-existent here on our planet. However, an abundance of helium-3 has built up on the Moon’s surface over the millennia as confirmed in soil samples collected by the Apollo 17 lunar mission, and it is just waiting to be mined. Why you ask? Because, helium-3 can fuel non-radioactive nuclear fusion reactions to produce safe, clean, abundant energy, and can completely transform our energy future.

Helium-3 nuclear fusion reactions release non-radioactive protons that can be harnessed to create electricity directly. This type of nuclear fusion is safer and far more efficient than the nuclear fission reactions used in nuclear plants today, which use heat to run steam turbines, losing energy in the conversion process and creating radioactive waste as a byproduct.

Projections estimate that on a commercial basis helium-3 would be worth around $40,000 per ounce. Roughly 100 tons of Helium-3 could power the entire population of Earth for a year and scientists estimate that the Moon could contain approximately 1 million tons—10,000 years worth of energy. ...

As Neil Armstrong departs this world, we now have a compelling reason to return to the moon.
Posted by Paul K. Ogden at 10:26 AM

It would be extremely expensive - probably cost prohibitive - to carry out a mining operation on the moon and bring it back here. It might make more sense for H3 to be a source of energy for a moon colony, but no one seems interested in that.

When commercial flights start going to the moon, that's when we will get unfiltered reports about what is really up there.

I wonder is it is also available on asteroids. The guy in California (whose name escapes me) is looking to mine them sometime in the future.

I'm not sure a craft would have to be manned to go to the moon, scoop up dirt and send it back. Granted that wouldn't suffice for a large scale mining operation. But given how expensive Helium-3 on earth is, it would seem to be worth it.