Appeals Court Previously Found Invoice Indemnfication to be Unconscionable and Unenforceable; So Why Did AG Zoeller Cave on Issue Against Best Interests of State Fair Stage Collapse Victims?

An AP story sets out the facts:


Indiana lawmakers presented their decision to offer an additional $6 million to victims of a deadly stage collapse at last year's state fair as a way to help those who weren't adequately compensated by its first settlement. But buried in the legislation was a clause protecting the state from having to pay even more.

The clause sought by Attorney General Greg Zoeller enabled him to tie the state money to a settlement with the company that owned the stage, and thrust the state into the role of negotiator as lawsuits swirled over the Aug. 13, 2011, stage collapse at a show by country duo Sugarland.
﻿
The state would make $6 million available, and victims could share another $7.2 million offered by the stage owner and manufacturer if they agreed not to sue the companies.

"This is about putting victims first," Zoeller said in a June 22 press release announcing the combined settlement, which he said lawmakers had approved.

What Zoeller didn't tout — and what has surprised even the bill's author — was that the enhanced settlement also was designed to shield the state from potentially paying out even more for the collapse that killed seven people and injured dozens more.

Documents obtained this week by The Associated Press show Mid-America Sound Corp., which owned the stage, was ready to sue the state to get back any money victims won in lawsuits against the bankrupt the companies.

Invoices signed by fair executive director Cindy Hoye in the months after the collapse include an "indemnification" clause that requires the fair to assume all responsibility for any judgments, fines, injuries and loss of life resulting from use of the equipment and to hold the companies harmless.

Attorneys for Mid-America claim the invoices constitute binding contracts, a contention the state disputes. But after the state had already paid $5 million, and with lawmakers prepare to provide $6 million more, Zoeller decided it was better not to test that argument in court.
...

It's still unclear whether the settlement will stand. Zoeller's office has said a "sufficient number" of victims must accept the offer for it to go forward, but it won't say what that number is. The state has secured waivers from 51 of the 62 victims and their estates, agreeing to clear Mid-America Sound and stage manufacturer James Thomas Engineering of any wrongdoing. The companies have until Aug. 15 to decide whether that's enough for them to agree to the settlement and let the state off the hook.

Attorneys I spoke with the past day or so were all puzzled by Zoeller's position that he had to surrender on the issue of the invoice indemnification.  When two parties have entered into a contract, especially those reviewed by attorneys on both sides, courts tend to take a very dim view of a party attempting to change the terms of that contract by slipping in clauses into other written documents that aren't going to get the same sort of scrutiny.

Attorney Gary Welsh of Advance Indiana summed up what a lot of attorneys were thinking about Zoeller's decision to wave the white flag on the invoice indemnifications:


More shocking is Zoeller's decision to essentially reward Mid-America for what I would argue was a fraud on its part. The company should be barred from ever doing business with the state of Indiana again for pulling such a deceitful act. When a business signs a contract with the state, the terms of the contract can only be modified if agreed upon and signed by both parties. A business simply cannot tack on an indemnification clause in its invoices that wasn't included in the contract it signed with the state to shift its liability to the state, particularly when you consider the fact that the state's liability was already limited under state law by the tort claims act. Hoye could not have unilaterally increased the state's liability, even if she had intended to do so.

As the AP article notes, Zoeller decided it was better to require victims to settle with Mid-America at the same time it was settling with the State rather than test the State's position that the invoices indemnifications do not constitute binding contract provisions. 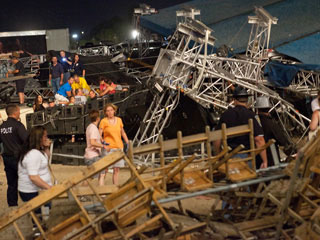 But the issue has already come before the Indiana Court of Appeals which . came down squarely on the side the AG's position that the indemnification language in the invoices were unenforceable, the very position Zoeller now says he's afraid to assert in court.

In Maxon Corp. v. Tyler Pipe Industries, 497 N.E. 2d 570 (Ind. App. 1986), a case originating out of the Marion County Superior Court, the Indiana Court of Appeals dealt with the issue as one of first impression.  Tyler had purchased two "pre-mix blower-mixer" units from Maxon.  One of the units exploded, injuring a Tyler employee.  When the employee sued, Maxon asserted that the lengthy indemnification language included on the back of the invoice for the blower-mixer unit made Tyler financially responsible for any negligence by Maxon.

The Court of Appeals found that the indemnification language in the Maxon's invoices constituted a material alteration of the contractual relationship and therefore it would not be effective without the express approval of Tyler.  Although the Court applied provisions of the Uniform Commercial Code in its decision, it went even further finding that such clauses wouldn't be enforced for an additional reason - they are unconscionable:


When, as here, the imposition of a broad indemnification clause is attempted without the express assent of the proposed indemnitor, and when that clause is placed in relative obscurity on the back of an invoice, it is unconscionable.  Id. at 537.

While the focus is on the AG's attempt to reach settlements with the State that would waive liability for stage owner Mid-America, it should be pointed out that the AG is also asking that the victims waive their rights to pursue the stage manufacturer, James Thomas Engineering.  It is not clear whether the same or different invoice indemnity provisions may apply to JTE.  If that is the argument, you have  IC 26-2-5-1 which says such indemnity provisions are "void and unenforceable":


All provisions, clauses, covenants, or agreements contained in, collateral to, or affecting any construction or design contract except those pertaining to highway contracts, which purport to indemnify the promisee against liability for:
(1) death or bodily injury to persons;
(2) injury to property;
(3) design defects; or
(4) any other loss, damage or expense arising under either (1), (2) or (3);
from the sole negligence or willful misconduct of the promisee or the promisee's agents, servants or independent contractors who are directly responsible to the promisee, are against public policy and are void and unenforceable.

Given the Attorney General's decision to withhold facts about the State motivation for insisting that victims release from liability non-governmental parties, and given what now appears a very weak legal argument for doing so, it will be interesting to see how many victims reconsider their decision to settle.

To see the rest of the lengthy AP article, click here.
Posted by Paul K. Ogden at 3:17 AM

Great catch, Paul. The AG's office could have easily done the same research and came to the same solid conclusion. The fact that Zoeller's office is arguing otherwise makes one wonder what his true motivations are.

I wondered if there was a case on point. I just didn't expect it to be exactly on point. Same exact issue...putting an indemnfication clause into an invoice.

Arguments matters a lot when common understanding still there.

Justifications issues a lot when typical knowing still there.

It is vital for business people to have an effective online bookkeeping in order to avoid this kind of issue.

It is vital for a sql server support to be very secured and at the same time accessible when the situation like tend to arise.