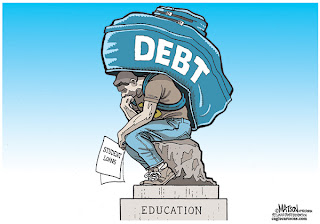 The American Bar Association requires that schools the ABA accredits send out a survey to new graduates nine months after graduation. In the survey, the law school asks the former student his or her current employment situation and salary. For years, the schools have padded the statistics, claiming for example someone working at Starbucks as being employed thanks to the legal education he or she received. The schools then use these employment figures to solicit new students and the numbers are also included as a factor in the ABA's rating of the school.

The ABA recently changed some of its criteria, disallowing the law school practice of padding employment stats by masking non-legal employment as being due to one's legal education. As a result, it's been suddenly revealed that there are an awful lot of unemployed lawyers. Reported starting salaries are also down about 30%.

While the ABA changed its criteria, we're still seeing only the tip of the iceberg. There still is no way of knowing that the data the schools are compiling represent honest numbers.  I remember asking the Indiana University at Indianapolis Law School (I refuse to call it the "McKinney" law school) for survey information years ago and being told that the school "estimates" salaries for people who do not return surveys. Why not "estimate" high and improve the overall average? You can bet the law school did exactly that. Imagine if you will if the ABA started auditing that raw data, demanding to see the surveys that produce these wonderful numbers that entice so many students to take on five or six figure debt for the promise of a legal education? The reported salary numbers for new law school graduates would drop like a rock. National Public Radio has an excellent report on the change the ABA's reporting criteria has had on the employment numbers cited by law schools:

Thanks to the Indiana Law Blog for finding this story.
Posted by Paul K. Ogden at 3:43 PM

Nobody who wants to work is unemployed in a free market. Unemployment among lawyers is a result of artificially high fees imposed by the cartel that controls the law schools. Law school costs too much, too much schooling is required for many law jobs, and non-lawyers can do many things they are blocked by the legal cartel from doing.

You always leave out of these analyses that you support the legal cartel of which you are a member. You also show no understanding of economics, though that is the subject, not law.

Nicolas, actually I aced economics in college and I've read plenty of books on the subject. I'm sure my expertise in that regard easily ranks with yours. What you ALWAYS conveniently overlook is FRAUD. Never once do you even acknowledge that people are led into going into law school because they are lied to about the job possibilities made possible by a legal education. Fraud skews the market for attorneys by encouraging people to go into the profession thinking it pays well, when it doesn't.

You also seem to think there is some strong connection between the legal profession and law schools. That isn't even remotely true. People who teach in law school and make up the law school academia are completely removed from the realities of practicing law. Most law professors wouldn't know a courtroom if they walked into one. If you think there is some tight connection between big law firms, or any law firms for that matter, and the law schools, you'd be sadly mistaken.

The problem is not a connection between law schools and the legal profession, but in fact a complete disconnect between the two. Anyone who has practiced law, going through the state's law schools, knows that. The law professors have no idea what the realities are about practicing law, or the job market for that matter. Nor do they much care...they get paid when students enroll and their job prospects after graduation doesn't affect the school's bottom line as long as people can continue to be conned into going to law school.

The profession of law in America is a state-sustained cartel. Cartels inevitably harm new entrants and consumers. The disconnect most immediately relevant is that you criticize some of the harm cartelization does, but you support the cartel. None of your posts that I've read say a word about the harm done to consumers by the legal cartel. To hell with Americans who are forced, when necessary, to pay cartel members 10 or 20 times per hour what they themselves make. The entire American legal and political system is designed to enrich and empower lawyers at the expense of non-lawyers.

Clarence Darrow didn't even graduate from a law school, and who among the living would not prefer his representation to the expensively educated, licensed, and pampered lawyer of today?

Small steps are being taken toward busting the legal trust.

Here is an example of the price Americans pay for being dominated by a legal cartel.

Scores in N.C. are legally 'innocent,' yet still imprisoned
http://tinyurl.com/78ro3ub

Justice Department officials said it is not their job to notify prisoners that they might be incarcerated for something that they now concede is not a crime. And although they have agreed in court filings that the men are innocent, they said they must still comply with federal laws that put strict limits on when and how people can challenge their convictions in court.