The Indianapolis Star provides some helpful background on a labor issue the Council is wrestling with:


Union members and other supporters of Downtown hotel workers plan to pack the City-County Council chambers Monday for a vote on a measure that advocates say would end alleged employment blacklisting.

That claim was among several in a lawsuit filed earlier this year on behalf of 14 former employees of a company that supplies hotels with hourly workers. They have alleged that several large hotels made pacts not to hire the contractor's staffers for permanent, better-paying jobs. 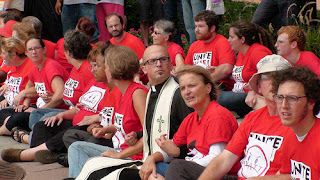 Council Democrats waded into the dispute in May with the proposal, which focuses on the blacklisting claim.

It would bar a hotel from obtaining or renewing its annual license if it has an agreement with a contract cleaning service not to hire any of that company's workers.

Industry representatives insisted to a council committee last week that no local hotel contracts contained such a provision. On the other side, a union organizer conceded that the workers had never seen a service provider's contract to check whether such language is included.

But Sarah Lyons, from a union called Unite Here, said several workers have been told by potential employers that agreements with the service providers prevent the hotels from hiring them.

During a meeting of the Rules and Public Policy Committee last week, about two dozen hotel industry representatives stood up at the request of Phil Ray, board chairman of the Indiana Hotel & Lodging Association, to show their opposition. He's also general manager of the Indianapolis Marriott Downtown.

"We agree 100 percent that we don't want that practice existing in our hotels," Ray told the committee.

The allegation of blacklisting was new to him, he said, and to other hotel managers with whom he's conferred. He thinks the industry should address the issue internally by discussing it with hiring managers.

The committee voted 5-2 to advance the measure, with its two Republican members voting no.

While the Council is right to take up the issue and, in doing so, shine the light of publicity on such practices, I don't know that we need an ordinance. The fact is the alleged activity, which would constitute collusion, is already against federal anti-trust laws.  (For example, see this 2010 on-line Wall Street Journal story on Justice Department action against technology firms which had colluded to not hire each other's employees.)  While Unite Here is often demanding anti-free market, socialist crap such as ordinances requiring "living wages" be paid, here the union is ironically arguing for laws designed to make sure the free market, we Republicans like so much, works as it should. That should garner some GOP support.

Perhaps Mr. Ray is correct in what he is saying and there is no collusion going on.  It does, however, certainly seem there is enough evidence to warrant a Justice Department investigation to investigate the practices of these hotels.  If they've done nothing illegal, so be it.  If they're violating anti-trust rules by colluding, then there should be legal consequences.

Does anyone have U.S. Attorney Joe Hogsett's number?
Posted by Paul K. Ogden at 9:21 AM

I worked as a personnel consultant in an employer-fee paid agency. We did both permanent and temp placements. When a company wanted to hire our temp they paid a fee. Or if they kept the employee long enough on temporary assignment, the fee was waived.

It's done all the time.

In this situation, it sounds to me like the temp agency thinks it owns the employees.