The Bogeyman at the Back of the Liberal Closet: Overpopulation

As of late, I often find myself in the company of a species of man often mislabeled as "liberals" or, even more inaccurately, "progressives."  What I find interesting about this particular strain of Homo Sapiens is how they like to fantasize about various scenarios leading to the demise of mankind.  Curiously though they are only interested in doomsday scenarios which they can blame on the behavior of Earthlings and which will allow them to advocate expensive, politically-correct measures such as cap and trade and the Kyoto Treaty, I'm guessing the only treaty in history unanimously rejected by the U.S. Senate.  (95-0.)

Other doomsday scenarios, indeed more likely scenarios, such as the Yellowstone supervolcano killing 1 out of every 3 Americans when it inevitably erupts (and an eruption is overdue), just isn't on the liberals' radar.  Of course, some planning could save the lives of millions of Americans upon whom volcanic ash will rain, but preparing for that scenario doesn't advance the liberals' anti-technology crusade. 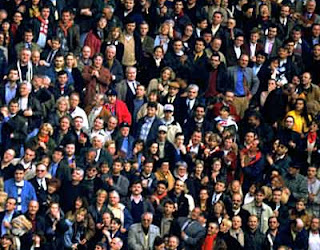 As I often do, I digress. This column is about the forgotten bogeyman at the back of the liberals' closet.  It is one that liberals, wanting to turn back the clock, used before the new bogeyman, known as global warming, er, climate change, emerged as the cause célèbre.  A misguided liberal friend (who I'll refer to as "Mike Large" to preserve his anonymity), in between stories about being a master debater (say that five times quickly and you'll get a chuckle), warned me about the dangers of WORLD OVERPOPULATION.  Too many people.  Not enough food and other resources. We're all going to starve and die!!! Scary, scary stuff.

Today while waiting for an appointment I picked up a Reader's Digest.  It had an article on world overpopulation which included some statistics showing that overpopulation is a myth:
I did a little "Internet research" to gather additional facts. This is from an article entitled "The Overpopulation Myth" written by Fred Pearce in Prospect Magazine:


Many of today’s most-respected thinkers, from Stephen Hawking to David Attenborough, argue that our efforts to fight climate change and other environmental perils will all fail unless we “do something” about population growth. In the Universe in a Nutshell, Hawking declares that, “in the last 200 years, population growth has become exponential… The world population doubles every forty years.”

But this is nonsense. For a start, there is no exponential growth. In fact, population growth is slowing. For more than three decades now, the average number of babies being born to women in most of the world has been in decline. Globally, women today have half as many babies as their mothers did, mostly out of choice. They are doing it for their own good, the good of their families, and, if it helps the planet too, then so much the better.

Here are the numbers. Forty years ago, the average woman had between five and six kids. Now she has 2.6. This is getting close to the replacement level which, allowing for girls who don’t make it to adulthood, is around 2.3. As I show in my new book, Peoplequake, half the world already has a fertility rate below the long-term replacement level. That includes all of Europe, much of the Caribbean and the far east from Japan to Vietnam and Thailand, Australia, Canada, Sri Lanka, Turkey, Algeria, Kazakhstan, and Tunisia.

So why is this happening? Demographers used to say that women only started having fewer children when they got educated and the economy got rich, as in Europe. But tell that to the women of Bangladesh, one of the world’s poorest nations, where girls are among the least educated in the world, and mostly marry in their mid-teens. They have just three children now, less than half the number their mothers had. India is even lower, at 2.8. Tell that also to the women of Brazil. In this hotbed of Catholicism, women have two children on average—and this is falling. Nothing the priests say can stop it.

Women are doing this because, for the first time in history, they can. Better healthcare and sanitation mean that most babies now live to grow up. It is no longer necessary to have five or six children to ensure the next generation—so they don’t.

The big story here is that rich or poor, socialist or capitalist, Muslim or Catholic, secular or devout, with or without tough government birth control policies in place, most countries tell the same tale of a reproductive revolution.

That doesn’t mean population growth has ceased. The world’s population is still rising by 70m a year. This is because there is a time lag: the huge numbers of young women born during the earlier baby boom may only have had two children each. That is still a lot of children. But within a generation, the world’s population will almost certainly be stable, and is very likely to be falling by mid-century.

To see the rest of Pearce's article, click here.
Posted by Paul K. Ogden at 8:37 PM

Over population is a problem..so will be lack drinking water and food production. It a challenge for mankind.

Overpopulation has long been in the environmental spook bag. Countries, such as India and China, that were once riddled with famine, are now major food exporters. The only places where hunger is a problem are those with lower degrees of free markets. Likewise any deficiency of water is attributable to centralized control of distribution, in contravention of free markets. Misallocation of water is a serious problem in the United States thanks to government intervention.

"Overpopulation" is the terminology of fascists.

Johhny Carson used to have authors come on his show (near the end of the show as filler)and tell you by the year 2000 we would have so many people on the earth that there would be chaos and mass starvation. Hasn't exactly worked out like those authors predicted.

Alex Jones contends that the global elite have as their end game reduction of world population by 80%, or so.

Liberals are useful tools and puppets, so it's certainly likely that if such plans existed, they'd be dependable mouthpieces in advancing these ideas.

When you flip the sign from positive to negative population growth, there are a lot of baseline assumptions that no longer hold true. People buy land because there is a belief that, over decades, it will only grow in value. Despite the current bear market the belief is largely correct because an increase in population raises demand. But when population is stable and then falling as a secular trend over many decades, the trend will be for land to reduce in value. A lot of behavior will change based on that and nobody is really modeling what those changes will look like.

Society of Socrates - We have enough agricultural land under plow to feed the world at projected peak population. All we need do is raise the laggards up to modern agricultural practices and the food problem is solved. There is no lack of drinking water. It is merely a financial problem of not being able to afford desalinated water in the 3rd world. The cost of desalination is dropping so I expect the lines to cross at some point. That's an economics problem, not some sort of resource limit issue.

guy77money - I always wonder why nobody maintains a clearinghouse of predictions so that the doom and gloomers can be held accountable.

Cato - A reduction of 80% of the population would not be without violence and would not likely end well for elites who would be in favor of it. This makes me not worry about it too much but certainly makes me a staunch defender of 2nd amendment rights and hope that the movement successfully internationalizes.

TM, I've heard that once the entire world solves desalination, the salinity of the oceans will decline or be altered such that the great ocean currents will not flow the way needed to keep Northern Europe from being as uninhabitable as Newfoundland.

I just about fell out of my chair.

Paul, I think there is a distinct chance you might be the bogeyman in the back of the liberal closet.

And I am happy about that.