When I heard the delegate fee for the Republican State Convention this year was $80 I was aghast.  Although I had withdrawn my name as a a candidate for delegate this year, and had not been one for a few years, I did not recall the fee being nearly that steep.  I looked back over my old records and found where I paid the delegate fee in 2002.  It was $30.  We are talking about a near tripling of the convention fee in 10 years. 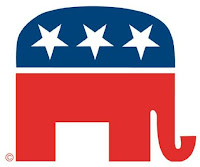 The party can justify charging a delegate fee to cover the costs of the convention. But at $80 a delegate, the fee becomes about raising money, not just covering costs.  But the increased delegate fee serves another purpose...controlling who becomes a delegate.  The Republican Party is experienced a populist wave led by the Tea Party.  Ron Paul's people also expressed an interest being a player in this year's convention.

Many of the Tea Party and Ron Paul people are just everyday working people whose budgets are already strained by the economy.  Paying $30 to attend a convention is doable; paying $80 to be a delegate, however, is going to cause many of those people to opt out of serving as a delegate.

The $80 delegate fee, adopted to raise money and keep the influence of the Tea Party and Ron Paulites at bay, is short sighted.  Those middle class, hard-working men and women are the lifeblood of the GOP.  The Republicans do not do themselves a favor by excluding those individuals from this important biennial party event at which several state-wide officials are nominated.

I think it very possible that the State GOP Convention is going to start resembling today's Marion County GOP slating conventions.   Those slating conventions used to feature several candidates contests and the candidates worked hard to meet with party workers before the event.  The party workers packed convention halls to decide these contests.  Slating provided energy and enthusiasm to the grass roots of the Republican county party.  Those folks had power and were decision makers.

Marion County party bosses, however, did not like elected party workers picking the candidates so they rigged the rules so much that now the party chairman get to pick over 80% of the people who vote at the county convention.  As a result, the handpicked choice of the county chairman always win slating and candidates not handpicked by the county chairman do not even try.  Of 17 positions up for slating this year, only one was contested.  The Marion County slating convention has devolved into a much smaller group of people showing up at the convention to applaud the choices of the party bosses.

When you strip power from grass roots workers, you undermine the long-term health of the party.  That appears to be the road the State GOP is taking.

Gary Welsh of Advance Indiana wrote two good stories about the GOP convention which can be found below:

Is This Any Way To Run A State Convention?

More On "Is This Any Way To Run A State Convention"