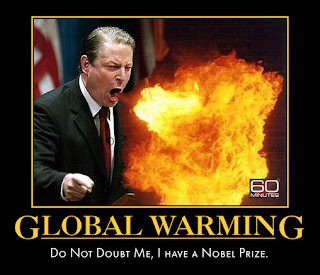 Assuming the planet is warming, how do we know it is man driving the change and not nature. After all, the climate has been changing for the 4.5 billion years history of the planet, long before man arrived. And the planet has been warmer and had higher CO2 levels before man.
But causality is the key.  Just because two things happen at the same time doesn't mean one causes the other.  Most men who are bald have been married. That doesn't mean the stress of marriage causes baldness.  Okay, maybe gray hair, but not baldness.

Let me give a better example.  In a divorce a few years ago I represented the father.  The mother only wanted my client to have supervised visitation because he was allegedly a theat to abduct his children and flee the country.  She hired an "expert" who testified that most people who abduct a child do not first threaten to abduct the child.  Therefore, she concluded, since my client had never threatened to abduct the children, he was more likely to abduct the children.

I found the below paragraph on the National Oceanic and Atmospheric Administration's website. The "proof" of causality between human activity and global warming is, well, just about as laughable as the expert's testimony on child abduction:


How do we know humans are the primary cause of the warming?

A large body of evidence supports the conclusion that human activity is the primary driver of recent warming. This evidence has accumulated over several decades, and from hundreds of studies. The first line of evidence is our basic physical understanding of how greenhouse gases trap heat, how the climate system responds to increases in greenhouse gases, and how other human and natural factors influence climate. The second line of evidence is from indirect estimates of climate changes over the last 1,000 to 2,000 years. These estimates are often obtained from living things and their remains (like tree rings and corals) which provide a natural archive of climate variations. These indicators show that the recent temperature rise is clearly unusual in at least the last 1,000 years. The third line of evidence is based on comparisons of actual climate with computer models of how we expect climate to behave under certain human influences. For example, when climate models are run with historical increases in greenhouse gases, they show gradual warming of the Earth and ocean surface, increases in ocean heat content, a rise in global sea level, and general retreat of sea ice and snow cover. These and other aspects of modeled climate change are in agreement with observations.

To summarize, here is what the NOAA cites as proof human activity is the primary factor causing global warming.

1) Our physical understanding of how greenhouse gases trap heat, how the climate system responds to increases in greenhouse gases, and how other human and natural factors influence climate.
--the statement simply begs the question of whether humans are influence the climate and how.  It doesn't prove causality.

2)  Indirect estimates of climate changes over the last 1,000 to 2,000 years, which show the recent temperature rise is clearly unusual in the last 1,000 years.
---how does that prove human activity is causing global warming in the past 1,000 years?  Again, the assumption is that because two things correspond in time, one is causing the other.

The NOAA's statement does not of course prove man is causing global warming.  However, it does prove that even scientists are willing to use junk science if it advances a political cause.
Posted by Paul K. Ogden at 10:07 AM

I'm not denying science if it's there, it makes me skeptical because for climate alarmists, the answer to global warming is always massive taxation plus world government. Can we have clean air and water without a fraudulent multi-quadrillion-dollar cap-and-trade program ?

Very funny picture to go with your report, Paul, and so appropriate.