Can You Get an OVI on a Bicycle in Indiana? 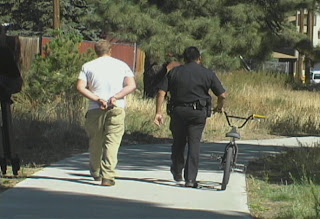 I posed this legal riddle on Facebook last night.  But I thought I would expand upon it here.

Let's say Jerry is at an Indiana bar on a Friday night drinking his meager paycheck away.  Jerry is intoxicated.  He has to get home, but can't afford cab fare.  Jerry's drinking buddies at the bar though offer him some alternatives to hopping in his car and risking an operating a vehicle while intoxicated charge.

George says:  "I have my horse, "Old Paint," tied up outside.  You're welcome to ride him home."

Larry says:   "My bicycle is chained outside.  You can take that home if you want."

Robert says:  "You're welcome to use my electric wheelchair to get home.  I'll come by and get it in the morning."

So the options are horse, bicycle and electric wheelchair.  One of those can net you an OVI charge...the other two are not covered by the OVI law.  (I'm not saying you can't get something like a public intoxication charge.)

(b) A person who operates a vehicle with an alcohol concentration equivalent to at least fifteen-hundredths (0.15) gram of alcohol per:

commits a Class A misdemeanor.

(c) A person who operates a vehicle with a controlled substance listed in schedule I or II of IC 35-48-2 or its metabolite in the person's body commits a Class C misdemeanor.

(d) It is a defense to subsection (c) that the accused person consumed the controlled substance under a valid prescription or order of a practitioner (as defined in IC 35-48-1) who acted in the course of the practitioner's professional practice.

Sec. 2. (a) Except as provided in subsection (b), a person who
operates a vehicle while intoxicated commits a Class C misdemeanor.

(b) An offense described in subsection (a) is a Class A misdemeanor if the person operates a vehicle in a manner that endangers a person.

So what is the definition of a "vehicle"? IC 9-13-2-196 provides for several definitions of that term as used in the Title 9.  However the definition specifically applying to the OVI offense is:

The legislature specifically exempted "electric personal assistive mobility device" from the definition.   So the electric wheelchair is definitely an option. (Ironically if the wheelchair is not motorized, it would appear to be covered by the OVI laws as a vehicle.)   I suppose a prosecutor could argue that the electric wheelchair is not Jerry's so that exception shouldn't apply to him, but criminal statutes are construed strictly so I think Jerry should win that argument.

But Jerry doesn't want to deprive Robert of the use of his electric wheelchair.  So now Jerry's options are the horse or the bicycle.  Which to choose?  Well "device" is not defined in Title 9. So let's look at a common dictionary definition of the term.

According to Merriam-Webster, "device" is defined as "a piece of equipment or a mechanism designed to serve a special purpose or perform a special function."

A horse is not a "piece of equipment or a mechanism," but a bicycle certainly is.

Labels: Operating a Vehicle While Intoxicated

Saw arrests for this several times, but never charges filed.

This was a good suggestion that you put up here...dude…..hope that it benefits all the ones who land up here.
Electrical Wholesalers