At least my criticism of the slating process, where phony judicial endorsements are decided by county chairman and handed out for $12,000 apiece, is 100% true. GOP County Chairman Kyle Walker, however, doesn't have any problem misrepresenting details to slander an opponent. Witness the slam piece on Judge Orbison and myself. If there needs to be any more evidence that the Supreme Court should step in and put an end to Marion County Party Chairmen hand picking local judges, Walker provides it with this piece. 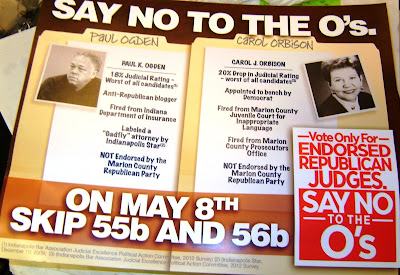 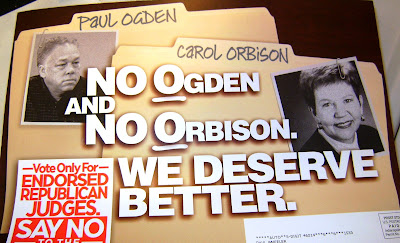 Of course the 18% judicial rating is a joke.   I was called out of the blue to get information for the Indianapolis Bar Association's website.  It was only after I submitted it that, it was suddenly announced that the information would be used to conduct a survey...two months after the deadline had passed for the surveys.  I knew right away I had been set up.  I had criticized big law firms like Barnes & Thornburg and Krieg Devault which regularly do business with the city and bilk taxpayers with inflated legal bills.   Now all they had to do was vote as a bloc in my survey and I'd get a bad rating, especially given the inevitable low return rate of a post-survey survey.  The IBA attorney who ordered the late survey be done was none other than C. Joseph Russell, a Krieg Devault partner.  Russell and Walker screwed up though, stacking the deck against me so much that they ended up getting an incredulous 18% rating.   Does anyone actually think that given my 25 years legal experience litigating cases in both civil and criminal courts, my clerkship at the Indiana Court of Appeals, my work in all three branches of government, that I'm only 1/3 as qualified as the non-judges Amy Jones, Helen Marschal and Clayton Graham?  It's disgusting that the IBA has allowed itself to be immersed in judicial campaigns through survey results that are easily manipulated for political reasons.

I am certainly not an "anti-Republican" blogger.  I do criticize Republicans who betray their conservative principles or are corrupt.  I guess that bothers Kyle Walker.  Too bad.  I am more of a Republican than Kyle Walker ever thought of being.

Fired from the Indiana Department of Insurance?  Uh, yeah, for WHISTLEBLOWING.  I tried to report a supervisor who was misappropriating funds from the title insurance division I headed.  I wrote a memo on that and other legal violations and was immediately fired for doing so.  Apparently Kyle Walker has no problem with people in state government misappropriating money.  I do.

A gadfly attorney?  You betcha.   Indianapolis attorneys were complaining about Judge Young fining people $400 or $500 for daring to ask for a trial in Traffic Court, a direct violation of their constitutional rights.  While others attorneys complained, I did something by filing a lawsuit.    As a result both the Indiana General Assembly and the Indiana Supreme Court stepped in to put a stop to the practice.  I also stood up to prosecutors across the state who were illegally pocketing forfeiture proceeds instead of giving the money to the state's schools. Apparently Kyle Walker has no problem with public officials who violate the law.  I do.   And I don't care if they are Republican or Democrat.

Not endorsed by the Republican Party?  Correct.  There isn't a single candidate on the ballot who has been endorsed by the Republican Party.  Party endorsements happen on May 8th.  There have been 10 judicial candidates who have been endorsed by appointees of the county chairmen after paying $12,000 apiece.  The Judicial Commission has said that is a violation of the ethics rules for pay a slating fee for an endorsement.  Governor Daniels has said that Walker's slating system is a travesty and the $12,000 fee amounts to purchasing judgeships.  I refuse to violate the ethics rules to pay a county chairman for an endorsement.  Period.

By this unconscionable mailing attacking fellow Republicans, Kyle Walker showed he is man without honor or integrity.
Posted by Paul K. Ogden at 11:42 PM

Did they alter your face like the Republicans did to Jeff Modisett in 1990? They gave Jeff some stubble to make him look more sinister.

National & local media told us from the outset how mean & muddy this election year would be. Conservatives continue to fight against the entrenched RINOs who will stop at nothing with their war chest and political favors to win at any cost. But the blatant lies sanctioned by party protectionists serve to inoculate themselves from conservative reformists such as yourself. It's a corrupt system where people need to go to jail. Throw into that mix the same mentality for the Lugar/Mourdock race campaign ads. It's a sick perennial season when citizens are abused by lies carried by the media, and new candidates are maligned by just being new.

Greg, it actually looks like they did...sspecially th second picture. The picture was taken by a guy who had mysteriously started following me around and taking pictures... showing up at fundraising events (which he didn't pay), attending tapings of Civil Discourse Now etc.

There have been 1-2 people who have dogged the Mourdock events as well. Seems they are operatives who are recording with the prospect of catching unfavorable comments or behavior, and they have been pointed out from the platform at campaign stops. Love to know who is paying them.

After what Kyle Walker has done, I don't see how any candidate endorsed by the Republican establishment is deserving of a vote in November.

This is a crooked party and a crooked bunch. I hope they all lose every election until they throw their bums out, have a complete housecleaning, lay down some principles and return as a respectable political organization, not Indianapolis' version of the Daley machine.

Correction: not even Daley or Boss Tweed were this unctuous.

I voted when my polling station for Admirals Sound opened at 6 o'clock this morning at St. Simon School on Oaklandon Road in Lawrence Township. There was a crowd of people there. Frankly, I was turned off by the several signs saying to vote NO for the O's who are not officially endorsed by the Republican Party. Those negative signs tried to make the O's look like Commies attempting to subvert and destroy the judicial system in Marion County, Indiana.
I voted for the O's. Maybe I am just a maverick.

Two nice things about crossing party lines to pick up a Republican ballot today: I could vote for Lugar and Ogden.