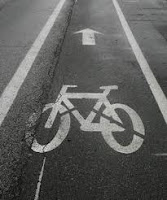 In the wake of substantial criticism about the design of the City's bike lanes, in particular the monstrosities on Broad Ripple Avenue and Illinois Street,  Jon Murray of the Indianapolis Star reports that City officials will be holding a series of public meetingson the topic.  The City's news release says the meetings are for the purpose of "teach[ing] residents how to use bike lanes, drive alongside bike lanes, safety tips, terms and signals for both bicycles and motorists, and how to read new bike lane signage and markings. Residents will learn how to plan their routes using the new bike lanes, greenways, and multi-use paths to get to their destinations.”

Let me translate.  "Residents you are stupid if you don't like our bike lanes.  Obviously you just don't understand  how to use them and we need to educate you."  The City apparently is not interested in residents' feedback on the bike lanes or input on how to design the bike lanes better for motorist and bicyclist alike.

The bicycle lanes on Broad Ripple are irresponsible. They took an entire lane of car travel to make a silly bike lane and curbing, ruining that necessary East-West cross street so badly that I have to use also underbuilt Kessler to get across.

There is now no clear road across the River between Kessler and 86th Streets. That's shameful and embarrassing. This city cannot grow without a decent road system.

They really need to build a bridge across the river at 71st St. and create a through route from Meridian to Keystone.

The language of this directive from "city officials" sounds much like an ultimatum to us "residents". UN Agenda 21 comes to mind.