Saw this lawsuit coming from a mile away.    I'd be shocked if the Diocese loses.  The law is pretty clear that the Constitution requires that government make exceptions for religious institutions in such situations.  The diocese's press release is below: 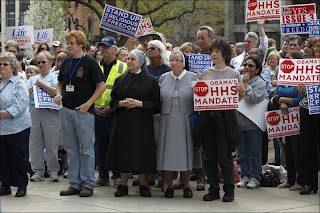 FORT WAYNE, INDIANA — On May 21st, the Diocese of Fort Wayne-South Bend, Catholic Charities of the diocese, Saint Anne Home and Retirement Community, Franciscan Alliance, the University of Saint Francis, and Our Sunday Visitor filed a lawsuit against various government defendants, seeking justice from U.S. District Court (Northern District of Indiana, Fort Wayne Division). The University of Notre Dame has filed a lawsuit in U.S. District Court (Northern District of Indiana, South Bend Division). We are in deep solidarity in our conviction that the government is not authorized to force us to violate our consciences, by making us provide, pay for and/or facilitate “services” that are contrary to our religious beliefs. “American history and tradition, embodied in the First Amendment to the United States Constitution and Religious Freedom Restoration Act, protect religious entities from such overbearing and oppressive governmental action.”

Religious freedom, protected in the U.S. Constitution and other laws and statutes, is rooted in the dignity of every human person. It is inherent in our humanity, a God-given right. It is a cornerstone of basic human rights and is necessary for the flourishing of a just society. We are obliged to defend it for ourselves and for others. We are asking in this lawsuit that this right be respected by our government.

The government has no place defining “religious employer” so narrowly that it only includes houses of worship. This reduces the freedom of religion to the freedom of worship. Religious liberty is about witness and action, as well as worship. The Health and Human Services exemption excludes most Catholic hospitals, schools, universities, and social service providers. They are “not religious enough,” according to the HHS mandate, to qualify for the exemption. Our diocese carries out our mission of service through our diocesan offices, parishes and schools, and through the work of our affiliated ministries. All of these institutions are guided by Catholic beliefs.

Today we ask people of all faith traditions, and all people of conscience to join us in our efforts to restore religious liberty to its rightful place: a cornerstone of our country, and our first, most cherished liberty.

Here is a copy of the complaint filed today.

Thanks to Advance Indiana for first publicizing this story.
Posted by Paul K. Ogden at 1:57 PM

To quote Maureen Dowd in The New York Times: "the lawsuit reminds the rest [of us] that what the bishops portray as an attack on religion by the president is really an attack on women by the bishops."

The fact is the Constitution protects religious views, even when those views might be claimed to be anti-woman. Obama's policy attempts to dictate to the Catholic Church a view in violation of its basic tenets. As such it is most certainly an attack on religious freedom.

We have not reached the point in this country - fortunately - that government can dictate which religious beliefs are acceptable. In fact, that would require the repeal part of the First Amendment, i.e. the Free Exercise Clause.

The nerve of Obama!!! One more reason to vote for Gary Johnson.

The real threat to religious liberty comes from the effort to impose one church’s doctrine on everyone.