Unfortunately, the obsession with global warming, er climate change, has diverted the public's attention from real potential disasters that could affect Earth. This report from the Digital Journal: 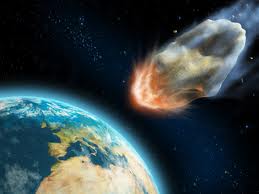 Scientists are predicting that the asteroid 2012 DA14 has a good chance of colliding with Earth in eleven months. Watch the skies in February 2013!

According to RT, NASA has confirmed that the 60 meter (or 197 feet) asteroid, which was spotted by Spanish stargazers in February this year, has a good chance of colliding with earth.

The scientists suggest confronting this asteroid with either big guns or, more strangely, with paint. The problem with either option is that there is no time to build a spaceship for the operation.

A spaceship could either shoot the asteroid down or simply crash into it - this would either break it into pieces or throw it off course.  ...

The paint would change the asteroid's ability to reflect sunlight, alter its spin and change its temperature.   ....

The asteroid's closest approach to earth is scheduled for 15 February 2013, when they predict that the distance between it and earth will be under 27,000 km (16,700 miles).

With the asteroid zooming that low, it will be too late to do anything with it besides trying to predict its final destination and the consequences of impact.

However, NASA's David Dunham did say: “The asteroid may split into pieces entering the atmosphere. In this case, most parts of it will never reach the planet’s surface.”

But theories are that if the entire asteroid did crash into the planet, the impact will be as hard as in the Tunguska blast, which in 1908 knocked down trees over a total area of 2,150 sq km (830 sq miles) in Siberia.

Actually breaking the asteroid up into pieces isn't necessarily a good thing.  At least they'll know right before the collision where the asteroid would hit.  You'd have some warning, even if only a few hours.  Breaking it up though creates a shotgun effect, raining large rocks down upon the Earth.  You won't be able to predict where they will hit.

While this asteroid is unlikely to impact Earth, there are other bigger asteroids out there that are on path to collide with the Earth decades down the road.  We have no plan of action for them.

But the United States has a far bigger concern in its own backyard.  The super volcano at Yellowstone is overdue to go off, a situation which would have devastating consequences for the United States.   A 2011 story in the U.K. Daily Mail describes:

It would explode with a force a thousand times more powerful than the Mount St Helens eruption in 1980.

Spewing lava far into the sky, a cloud of plant-killing ash would fan out and dump a layer 10ft deep up to 1,000 miles away.

Two-thirds of the U.S. could become uninhabitable as toxic air sweeps through it, grounding thousands of flights and forcing millions to leave their homes.

This is the nightmare that scientists are predicting could happen if the world’s largest super-volcano erupts for the first time in 600,000 years, as it could do in the near future.

Yellowstone National Park’s caldera has erupted three times in the last 2.1million years and researchers monitoring it say we could be in for another eruption.

They said that the super-volcano underneath the Wyoming park has been rising at a record rate since 2004 - its floor has gone up three inches per year for the last three years alone, the fastest rate since records began in 1923.

Make no mistake about it, Yellowstone's Super Volcano will erupt, the only question is when.  The result will be instant death to millions of Americans, not to mention millions more who will die or be severely injured from breathing toxic dust that also cuts the lungs.  Two-thirds of the United States will probably be rendered uninhabitable.

But, hey, let's instead worry about the Earth becoming a few degrees warmer over several centuries, even though temperatures on Earth have fluctuated for 4.5 billion years..  That's a far bigger concern than mankind being wiped out by an asteroid or vocano....he says with extreme sarcasm.
Posted by Paul K. Ogden at 9:49 AM

So let me get this straight: because other potential dangers exist, we should keep polluting our environment and not worry about whether man is causing the global temperate to rise?

Don't worry about the man breaking into your home, there is a rabid dog on your lawn!

Global warming isn't about "pollution." In fact the particles in the air from pollution actually blocks sunlight and lowers the Earth's temperature not raises it.

There is simply no evidence that today's temperature is somehow ideal and that any variation will lead to disasterous consequences. In fact, many parts of the world would benefit from a warmer climate which produces longer growing seasons, for example.

I think we should be a lot more worried about natural disasters that we know is going to happen. We know Yellowstone is going to go off. We know an asteroid will eventually hit the Earth. There is plenty of evidence supporting those. Those disasters will have consequences far beyond what global warming will have which is simply based on computer simulations based on the entry of selective data.

Feel free to drink a little mercury with your water. afterall, it occurs naturally on Earth. Despite your interesting definition, CO2 released from human manufacturing and other sources is a pollutant.

And I'm not trying to get into a discussion on whether global warming is man made or not, just pointing out that your argument is tragically flawed.

"In fact the particles in the air from pollution actually blocks sunlight and lowers the Earth's temperature not raises it."

Wow. To make such an overreaching misstatement is unbelievable.

Greenhouse effect. Look it up.

"In fact, many parts of the world would benefit from a warmer climate which produces longer growing seasons, for example."

Gosh and I thought Super Tuesday would be depressing enough!;) Throw in the dump in the stock market and ahhh well at least it's in the 60's and the sun is shining. I agree with you Paul I suspect mother nature will get us with a asteroid or a super eruption of a volcano before global warming kicks in. Maybe North Korea of one of those crazy Arab nations will lob a few nukes at their enemies to really cause some man made global warming. I am not one bit worried that Yankee Stadium will be under water by opening day! ;)

The reports from all over the N hemisphere, except for the central USA, have been that this winter provided record cold and snow. It snowed in Rome for the first time in 26 years. There were record cold temps in Fairbanks AK.

Guy77money,
I wish I could say something so optimistic about that specific place, Yankee Stadium---the place where evil festers and spreads to the rest of the baseball world; the management of which has corrupted the game so that big market teams (except for the Cubs, whose management {wince as I write this} is GROSSLY incompetent)---would be underwater on Opening Day. That aside, Global Climate Change can result in wildly ranging temps. That explains bad winter weather in some places even as the world's overall, average temps rise. Human-manufactured pollution, as a problem, is something about which we can do something. Asteroids from space, on the other hand, inspire fear and rationale for star wars-like missile defense programs. Paul, Ronnie Reagan would have loved this. You would have found a warm spot in his heart and a corner in his calcified brain. "Ramp up those high-tech weapons folks and crank out missiles!" Some jobs would be created, but far more are created by attempting to address human needs on this planet at the same time as our problems with human waste.

Centuries ago, people thought the earth was flat because they only looked at limited 'evidence' -- what they could see from where they stood.

People also thought the sun moved across the sky because, from where they stood, the earth appeared to be stationary and at the center of the universe.

Today we have people using the same flawed reasoning, looking only at their immediate surroundings, to draw conclusions on climate change.