Why are Marion County Democrats Holding Their Slating Convention the Day After Deadline for Filing to Be a Candidate?

Marion County political party leadership historically takes a dim view of people who file to be candidates before slating has taken place.  The reasoning is that the early filing insults party workers who are supposed to be making the decision about who the candidates should be. 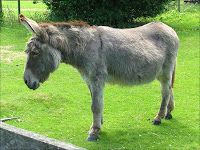 The deadline for candidates (for judge, state representatives, state senate, precinct committeemen, state delegate, county-wide offices, etc.) to file is noon on Friday, February 10th.  Why then are Marion County Democrats not holding their slating convention until Saturday, February 11th?

Many people assume that a candidate who is slated is an official candidate.  Not true.  Slating has no legal effect whatsoever. A person who is slated still has to file the proper paperwork by noon Friday, February 10th, or that person is not a candidate.   Again, that's the day before the local Democrats slate candidates.

If Democratic candidates-to-be wait to file until after slating, there is a vacancy on the ballot which I believe is unilaterally filed by the Democratic county chairman, i.e. Ed Treacy.
Posted by Paul K. Ogden at 1:13 AM