"Recently passed Senate legislation would make sodomy and sex with animals legal under military law, ending long-standing prohibitions and triggering cries of perversion from conservative groups.
The bill, which the Senate passed 93-7 last week, would repeal Article 125 of the Uniform Code of Military Justice that states any person who engages in "unnatural carnal copulation with another person of the same or opposite sex or with an animal is guilty of sodomy." Those found guilty of sodomy would be subject to court martial. 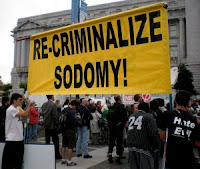 Senate Armed Services Committee Chairman Carl Levin, D-Mich., said Thursday that the repeal was simply a legal change because it's no longer constitutional. A 2003 Supreme Court decision struck down a Texas ban on sodomy as an unconstitutional intrusion on privacy.

Senate negotiators are working to reconcile their version of the bill with the House-passed measure and produce final legislation that sets policy for the Pentagon. House Republicans oppose the repeal and want to leave the provision intact.

Conservative groups angered by the end this year to the ban on gays serving openly in the military were outraged by the proposed repeal of the sodomy provision.

"Now, in its rush to accommodate the left, Congress may have inadvertently opened the door to even more perversion," Tony Perkins of the Family Research Council said in a statement. "As part of the defense authorization bill, liberals are pushing to make sodomy a legal activity under the Uniform Code of Military Justice. In its haste to make gay sex an official part of military life, the left could be unintentionally repealing the ban on bestiality too."

I think if people knew how expansive the terms "unnatural carnal copulation" and "sodomy" actually are they would be demanding a change in the archaic to sex taken military code.  Here are definitions.

Okay, I can see keeping the ban on sex with animals, but do we really want to regulate the types of sexual acts consenting adults choose to participate in.   Members of Congress might want to be reminded that these terms, "crimes against nature" and "sodomy" include oral sex with members of the opposite sex.    I doubt too many of them can say they have not been guilty of that offense.  Certainly a former Commander-in-Chief of the military is infamous for enjoying that particular act of sodomy.
Posted by Paul K. Ogden at 12:52 PM

This exposes a weakness in United States military strategy. Preparaton and initial contact seem to be missed by our brass. They go in for shock and awe, presume to be done in five minutes (figuratively), and walk away. By analogy, foreplay is an important aspect of sex. And if oral sex has been "out" all these years for military personnel---I mean, they couldn't even talk about things they were going to do? Geez. That's harsh.

Levin wants to decriminalize oral sex while allowing the military to indefinitely detain Americans without trial. He wants your stay at Gitmo to be enjoyable.

What about the use of cigars as part of a sexual act?