On the front of the Metro+State section today is a summary of the candidate's positions on the issues "compiled" by the Indianapolis Star writers Jon Murray and Chris Sikich.  I assume "compiled" doesn't mean the same thing as "written" so I won't blame them for the questionable summary of the issue of Spending": 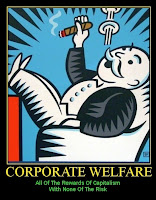 Ballard has reigned in spending on the annual budget and found creative ways to add revenue through the sale of the city's utilities and the privatization of its parking meters.  Kennedy has taken aim at the mayor for providing the Indiana Pacers financial assistance to help operate Conseco Fieldhouse, for privatizing the parking meters and for taking money from a special taxing district Downtown to balance the 2012 city budget."

There are so many problems with this summary, it is difficult to know where to start.  The claim that Ballard "reigned in spending" is questionable, especially given his increased sports subsidies and other giveaways.  But as far as adding "revenue" through the sale of the city's utilities, that's not "revenue."  It is a one time payment from Citizen's Energy.  Further, since Citizen's Energy is a public entity WE own, that one time payment, financed by Citizen's Energy with a 30 year loan, is money WE have to pay back.  Of course, that is a fact the Star, most notably columnist Matthew Tully, never bothers to mention.

Oh, and the privatization of the parking meters.  "Creative?"  Are you kidding?  In exchange for a $20 million one time payment and an $8 million investment in new meters, ACS is getting 70% of the revenue stream from the meters for the next 50 years. Of course, the City could have bought the meters and kept 100% of the revenue for the next 50 years.  The parking meter privatization actually costs the city revenue from the meters.  Oh, and let's not forget that the Mayor's top lawyer, Joe Loftus, lobbies for ACS, another fact the Star never bothers to mention.  The only "creative" thing about the parking meters privatization was the creative lies used it to sell it to councilors.

Now let's turn to what the Star described as Kennedy's position on spending issues.  The Star claims Kennedy has "taken aim" at the Pacer $33.5 million subsidy?  Really?  In what ad has she made that an issue?  Speaking of which, in what ad has Kennedy every raised the parking meter privatization issue?   I think possibly Ballard's raiding of the downtown TIF to balance the budget (which apparently the Star thinks is "creative") was raised by Kennedy in an ad, but it was at best a passing reference only.

The summary suggests Kennedy has taken on Ballard's support of corporate welfare measures, in particular two of the most unpopular, the Pacer $33.5 million gift and the ACS 50 year parking meter contract.  Kennedy might have briefly mentioned those topics to a Star reporter or in a debate, but unless she is willing to spend money to raise those issues in a 30 second television spot, that opposition won't even register on the public's radar of what issues to consider when voting for Mayor next Tuesday.
Posted by Paul K. Ogden at 8:25 PM

She raised the issue during the primary saying that she'd be a "tougher negotiator" or something like that.

Pretty weak criticism if you ask me.