The Election of 2011 features a political novice who ran as a populist in 2007 but upon election immediately cozied up to the wealthy political insiders.  Greg Ballard's tea party, populist roots quickly were set aside when on Election Night 2007 as insiders like Bob Grand and Joe Loftus maneuvered to take over the transition and ultimately the administration.
While Republican councilors voted in lockstep for tax/fee increases and taxpayer financed giveaways that should have been antithetical to their conservative nature, the Democrats in 2011 were perfectly positioned to seize the populist agenda that Ballard had left behind on Election Night. The time was right as both the right, as represented by the Tea Party, and the left, as represented by the Occupy Wall Street movement, have taken strong, highly popular positions against corporate welfare. 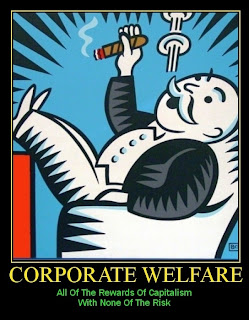 During the past four years, the Ballard administration has taken corporate welfare to a new level.   You had such highly unpopular moves as Ballard's giving $33.5 million in property taxes to the billionaire Simons for the Pacers and parking meter contract which gives away 70% of the revenue to politically connected ACS for the next 50 years.  Then there came a deal for taxpayers to build a parking garage in Broad Ripple and give the ownership of the building and its revenue away to Keystone Construction a major political contributor.  One can't forget Buckingham, a politically-connected company involved, for which Ballard used $100 million of taxpayer money to back a loan for the company when it could not get the private sector to fund a risky project.

Meanwhile the Mayor's misplaced priorities were evident in everything he was doing. While wealthy insiders were getting rich during the Ballard administration, the library had to cut hours, the animal welfare budget was slashed, and parks were underfunded.

Attacking corporate welfare and Ballard's misplaced priorities would have provided a slam dunk victory for the Democrats in the 2011 Indianapolis municipal election.  Kennedy would have easily defeated Ballard and Democrats would have won a huge majority on the council as they successfully attacked Republican councilors on their pro-corporate welfare, anti-taxpayer votes in favor of the Ballard agenda.

A funny thing happened though. The Democrats saw they likely had a winning hand on corporate welfare and chose to throw away three aces.  Rather than take on the sweetheart insider deals, the path to an easy victory over Mayor Ballard, they chose to instead fight the election on other grounds.

The Democrats will win a majority on the council tomorrow.  Little doubt about it.  But the Democrats were poised to have a much bigger majority, possibly, as many as 20 seats, if they would have been willing to take on the insider deals the Republican councilors voted for contrary to the best interests of their constituents.  As far as the Mayor's office, the Democrats apparently would rather concede the 25th Floor than challenge the insider establishment that runs this City.
For the powerful political insiders who benefit from the sweetheart deals fashioned by those in power at the expense of everyday working men and women, the 2011 Indianapolis municipal election is over.  The insiders won and the people lost.  The counting of the votes is but a mere formality.
Posted by Paul K. Ogden at 9:51 PM

Yes/ Some sentiments that I have heard expressed are that since both the major parties' candidates for mayor are corrupt, who cares who won.