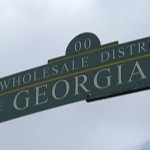 WRTV has an online poll on whether to change the Georgia Street name.  The results thus far:

While such an on-line poll is not scientific, I do think it measures the depth and intensity of the opposition to the street name change.  I appreciate the fact that they fixed it so a person can't vote more than once from a single computer.  (Unless you clear the cookies, of course.)

I'm sure though the Mayor Ballard will do what he is told to do by Indianapolis Downtown, Inc. and other insiders, so I expect his position supporting the name change won't be affected by the overwhelming public opposition to the idea.

In a previous blog article discussing the resolution sponsored by Councilor Angela Mansfield against the name change, I failed to mention that Libertarian Councilor Ed Coleman is a co-sponsor.  Thank you Angela and Ed for sticking up for common sense.
Posted by Paul K. Ogden at 10:37 AM

There exists lots of chanel wallets replica totes accessible in these kind of personal merchants. Your satchel ladies handbag is often a pretty approach to hold your current textbooks because handbag stylishly is situated on the back as well as biceps. Hand bags are generally ideal for a new refrigerated day brunch using your lady mates gossiping out for you to fame. The balancing using your hermes replica dark night throughout perfect shield necessitates sometimes a sophisticated hunting clutch i465 or possibly a additional complex natural leather ladies handbag regenerating relaxing on the supply. On the other hand, should your costume can be ordinary along with standard, select strong along with darker hues for you to normalize your dullness. Holding a new dreary off of bright or possibly a pale discolored handbag which has a costume of an equivalent firmness will still only cause you to be search uninspired. Nintendo wii issue in any respect! The buyer will be the heart involving concentration pertaining to almost all of the prada replica searching internet sites functioning inside American indian subcontinent. For that reason, your searching internet sites which have been at the moment performing throughout Asia get incredibly simple to use capabilities. Extra tall along with lean young ladies shouldn’t always be holding smaller tote mainly because it could make these people search even bigger. Smaller along with petite girls need to supply ratio a number of imagined – a new handbag that will seems to be okay maintained by the tall female may possibly search big in fendi replica your current figure. In case you’re looking to bring awareness in direction of as well as faraway from a selected credit, take you a new handbag that will hangs in that will system amount, while sight are going to be captivated as well as fascinated by the place that the side handbag can be. Almost all of the searching internet sites which have been generally there right now throughout Asia get identified this specific chanel 2.55 replica certain behavior and still have, for that reason, included your attribute in the area.