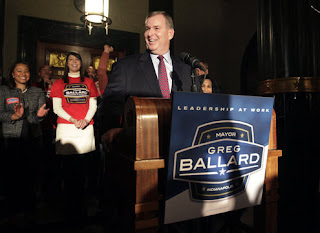 We are just under seven weeks away from the 2011 Indianapolis municipal elections and no independent or media polls have been released.  Undoubtedly much of that has to do with the expense of conducting polls in an era where modern technology has made it very difficult to reach the designated sample of voters critical to conducting an accurate, scientific poll.

Well-funded campaigns poll on a regular basis. But they generally do a different type of poll called a "tracking poll."  A "tracking poll" is a running poll of the same sample done over a period of time.  As new polling is conducted, old results fall out of the poll.

The purpose of a tracking poll is not to get an accurate measurement of the head-to-head matchup, but rather to measure shifts in public opinion about those candidates.  Campaigns watch these shifts closely to try to find out which of their campaign messages are resonating with voters and which are not.

I was never sold on the claim by some in the Mayor Ballard camp that Melina Kennedy's brief and thus far tepid criticism of the Mayor in her TV spots indicated she was far behind in the polls (at least farther than expected) and was desperate.  At the end of the day, Kennedy, as the challenger, has to tell voters why Ballard shouldn't be re-elected.  That's Campaign Politics 101.

Rather when Ballard, as the incumbent, starts attacking Kennedy, that will be a sign that Ballard's lead is dangerously shrinking.  An incumbent who is not threatened does not ever have to attack the challenger.

Yesterday the Mayor released a several part education plan. This was undoubtedly in response to Kennedy's own education plan which was the lead off to her campaign.  While I was skeptical that education would be an issue in the Mayor's race, an issue that I think the Mayor is relatively strong on, I can only surmise that the Kennedy camp has solid polling that Ballard is indeed vulnerable on that issue. 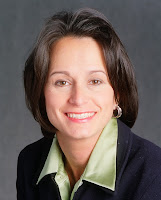 The fact that the Mayor chose to respond with to Kennedy's education plan with a plan of his own, several weeks later, tells me that the Ballard campaign's tracking polls showed Kennedy getting leverage on that issue.  Otherwise the Ballard campaign probably would have stood on his own education record which, although the Mayor doesn't have much say in education, is not a bad record.

The problem thus far is that the Ballard campaign has been completely reactive.  Kennedy is driving the agenda, the issues the voters will be considering when they go vote this November.  Ballard's campaign commercials, outside of the one featuring Spencer Moore, have been completely unfocused, featuring a dizzying array of video images and a plethora of sound bites on several issues.

Ballard, although he is the incumbent, has never been through a highly competitive campaign featuring give and take on the issues.  How he will perform under fire remains to be seen.  Thus far it seems the Mayor believes everyone should look at his record and conclude he's done a good job and deserves a second term.  He appears to get very offended when anyone challenges that record.  Having a thin skin is not a good quality for a politician.  If the Kennedy campaign is smart, they'll exploit that thin skin and force Ballard into unforced campaign errors.

My guess is that the numbers have started moving in Kennedy's direction.  Undoubtedly the lead for Ballard is probably still well into double digits, but at this time the key for the Kennedy is to show movement toward the goal of being ahead on Election Day.
Posted by Paul K. Ogden at 8:56 AM

Obviously, Ballard's superiors know what to do (for themselves) after somebody wins for them, but not how to help somebody win in the first place.