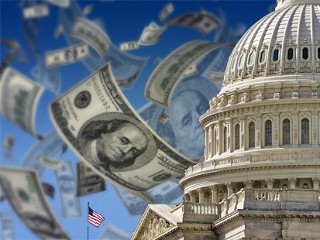 Some explanation is in order.  The typically used constitutional amendment process is that a proposed constitutional amendment is approved by 2/3 of both houses of Congress and then submitted to the states for ratification.  Upon approval of 3/4 of the states, the proposed amendment becomes part of the Constitution.
The Framers though built a couple exceptions into into the Constitution that allowed states to bypass Congress in the initial approval step and allowed Congress to bypass state legislatures in the ratification process. The first alternative is the one before us.

First, Congress in 1985 passed the Gramm-Rudman-Hollings Act, which passed called for automatic cuts in discretionary spending when certain deficit-reduction targets were not met. The Act was partially overturned by the courts and then repealed entirely by Congress.

Second, due to an unprecedented two decades of sustained growth during the 1980s and 1990s, revenues eventually outpaced expenditures, leaving the federal budget with a surplus.

Finally, an argument used against the states call for a constitutional amendment to balance the budget was concern there will be a "runaway" convention considering an assortment of changes to the constitution.

As a result of this unprecedented deficit spending, the United States is piling up debt at an alarming rate.  Two wars, a deep recession, and continued increases in federal spending, wiped out that 1990s surplus leaving the United States with such a deficit that requires the federal government to borrow 40 cents of every dollar it spends.  To bring that home to the family budget, it would be like a husband and wife bringing home $4,320 a month while spending $7,200, amassing massive credit card debt to pay for the extra spending.

The recent budget deal will only make a small dent in the deficit spending, a fact that has the U.S. stock market in turmoil.

I don't believe that Congress will ever regularly balance the federal budget without the hammer of a constitutional convention hanging over their heads requiring them to do so.  With the federal government able to print money, there is always going to be pressure to spend for things each side what, typically with the Democrats, spending on social programs, and with Republicans, spending on defense.

A constitutional amendment providing an exception for situation when there's a declaration of war of a supermajority override when there is a national emergency, would have the added benefit of restraining the Presidents' (both Republican and Democrat) out of control use of military force under the guise of their powers as Commander-in-Chief.

As far as the "out of control convention" argument, I frankly don't buy it.  The Constitution is considered an almost sacred document and changing it to be almost sacrilege.  Further, the proposed changes would have to be ratified by 3/4 of state legislatures, which obviously isn't going to happen if the changes are radical in nature.  I have full confidence a constitutional convention would focus on the issue of a federal balanced budget.  To go beyond that would doom the balanced budget amendment.

Fortunately, the Framers didn't put a time limit on petitioning for a constitutional amendment under Article V.  As a result, 32 of the necessary 34 state petitions to congress for a convention to consider a balanced budget amendment are still on the table.  A mere two more states' petitions are required before Congress has no choice but to call a constitutional convention per Article V.

A balanced budget amendment is idiotic.

Paul, you can't balance a budget with our national debt.

Total federal revenues are $2179B.

When 1/4 of all revenues are going right to bankers' pockets, it doesn't leave enough to run the country. You inescapably have to borrow to meet operating expenses.

We need to realize that the federal reserve, government bonds and fiat money were all means by which every person in the country would have to make transfer payments to the rich.

We need to repudiate the debt and issue a new asset-backed currency that can't be inflated.

This country will not experience freedom until we tear down this bankers' scam.

Repudiate the debt. Don't perpetually enslave Americans to the profit mill of the bankers.

How is the budget going to be balanced without a balanced budget amendment? Clearly it's not happening and needs to happen. Out debt is crushing us.

Of what we spend, 6% goes to interest. Not nearly as high as I would have thought, but I confirmed it several places.

The problem is we are borrowing 40 cents of every dollar we are spending. So we're stacking debt on top of debt. Yes, we would need RADICAL restructuring of government to get back to a surplus, but I don't see how we have a choice. Debt will strangle us at the rate we're going.

I don't see anyway the pols are going to voluntarily balance the budget. States and local government have to balance their budgets, why not the feds?