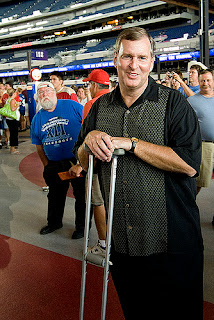 Greg Ballard's upset victory in 2007 afforded the Mayor and the Marion County GOP the unique opportunity to become a more populist party, reaching out to working men and women in an attempt to make the GOP the majority party in the county.

Immediately upon election, however,  Ballard's transition team was taken over by the country club, establishment wing of the party and the rest is history - a Mayor more interested in helping downtown elites, a person who can't relate to those who in this recession are struggling to pay bills.  Mayor Ballard doesn't understand why more Indy residents are not going to Lucas Oil Stadium.  Jon Easter of Indy Democrat reports:


I was listening to the Jersey Johnny Show on 1070, the Fan. Mayor Ballard is a frequent guest on the program, and he was on talking about the upcoming Super Bowl and other sporting events. Jersey Johnny brought up the fact that 64,000 seats were sold for the Colts Friday night preseason game against the professional football team from Washington, D.C. Johnny said that even though all the seats were sold that there were a lot of unoccupied seats for the preseason game. He suggested that someone give tickets that they weren't going to use to a neighbor kid and his family so that they could experience an NFL game. Great suggestion!

Mayor Ballard said that he enjoys going to Colts games, "I'm at every game," said the Mayor. He says that he often gives access to the city suite to those that, "wouldn't otherwise get to go to the game." Then, he dropped this knowledge on the city of Indianapolis.

"It always amazes me the number of people that have never been in Lucas Oil Stadium," said the Mayor.

Well, Mr. Mayor, let me educate you. It costs money to go to LOS. Money that some people just don't have in Marion County. I was there at a high school event on Saturday night for the Peyback Classic. Tickets were $10 (though I was there as a media member). Parking was $10, and I paid $9.25 for the smallest Diet Coke and the smallest popcorn I could buy. Had I paid for a ticket, I'm out $29.25. Multiply that times four. That's a hefty amount even for a non-Colts event where the cheapest ticket is $48 a seat.

The vast majority of the citizens of Indianapolis cannot afford to go to an event at Lucas Oil Stadium. When Lucas Oil Stadium was built, studies showed that almost 2/3 of the people that went to Colts games did not come from Marion County. These are your citizens, Mr. Mayor. Shouldn't you know that? I would think so.

Easter hits the nail on the head.  Ballard, having been showered by country club memberships, sporting tickets, free travel and other perks of his office, is completely out of touch with the plight of working men and women in this economy.  That Ballard chides people for not spending their money to go to Lucas Oil Stadium is outrageous.
Posted by Paul K. Ogden at 2:21 AM

The other reason: I've not been inside Lucas Oil Stadium because ... well, why would I go there?

I don't want to pay to watch millionaires play ball, even though I could "afford" a ticket.

My leisure is spent "doing", not "watching".

That article is new for me I enjoyed a lot when I read that article. I get much new information from this site that’s why I want next visit very soon. So please keep posting me.