How to Resolve the Satellite Voting Issue in Indianapolis 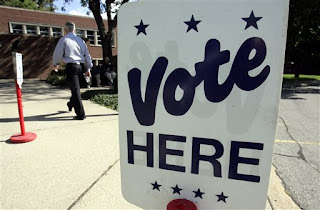 Republicans have in the past expressed concerns that these satellite, early voting locations could open up the process to fraud.  Modern technology has lessened that possibility, however.   For example, voter lists can be immediately updated, thus lessening the possibility that a voter might try to vote in multiple satellite locations.

As far as the location of the two satellite locations, the answer would seem to be simple:  Let the Democrats pick one location, while Republicans pick another.  Problem solved.

While I'm much more a fan of Election Day voting centers than early voting at satellite locations, the latter is not going to go away any time soon.  Republicans need to be careful to not just reflexively oppose them.  Voters will see that opposition as the GOP wanting to making the voting experience more difficult and less convenient for them.  That's not a good political position to be in
Posted by Paul K. Ogden at 11:59 AM

That was TOJOs big thing when he was the Premier of the MCRCC. He hated the idea of someone being able to vote.Heaven forbid that we make it easy for folks to vote. But in the end it didn't really work out for him ,now did it since he last every single election last cycle

TOJO lost every election, except the one in 2007 when he didn't support Ballard and three of the four at-large candidates.

Paul, he lost a lot more than elections.Like how about any bit of respect that he had prior to being the hatchet man for Brooks

Ben, actually I think Brooks is the hatchet man.

It is all about voter suppression and blocking as many people from voting as possible.