Today I attended the Brickyard 400, courtesy of two free tickets given to a friend.  The last time I went to the Brickyard 400 was in 1995, the second year of its running.  The difference between the two years is striking.  In 1995, the grandstands were packed.  In 2010, the grandstands were half full.  Part of the stands on the Northeast corner had actually been blocked off completely due to the lack of attendance.

Granted the Indianapolis Motor Speedway isn't ideal for stock cars. The lack of steeply banked curves makes passing difficult.  The races at the Speedway too often resemble a train of cars, contrary to the bumping and passing that is traditional with NASCAR racing.

NASCAR used to brag that it provided the most popular spectator sport in the world.  But NASCAR's attendance is not only down at IMS, it is down throughout the sport.  Why?  Some may point to the less fan friendly changes made by NASCAR or other changes with the sport.  But here's another idea.

Go into many sports-crazed fans' houses and what do you find?  You find a high definition, big screen television set, often accompanied by surround sound and a DVR.  People have invested major sums in their home entertainment systems.  Do those same people want to spend time and money to drive across the country to attend a NASCAR race when they can experience it in high definition in their own homes?  Some will, but many won't, especially given the country's economic downturn. 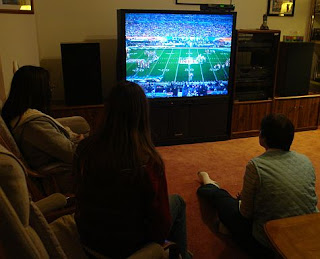 Other spectator sports, especially NFL football, may scoff at the notion that modern television technology will lead to decreased attendance at games.  But are NFL officials whistling as they walk by the graveyard?

The new NFL contract anticipates revenue rising from $9 billion to $20 billion.  Where is that money coming from?  Much of it will come from increasing ticket prices, a fact that caused former Indianapolis Star sportswriter Bill Benner to criticize the deal in a recent Indianapolis Business Journal column.  (Sorry...subscription is required.)  At some point, the cash-strapped Colts' fan is going to give up his trip to Lucas Oil Stadium to watch his favorite team from the confines of his home.

Other sports can scoff at the declining attendance dilemma NASCAR is facing.  But possibly, just possibly, the declining fortunes of NASCAR are simply the precursor for the future of all spectator sports.  At some point ticket prices will become so high that people will start staying home.  And when a person can watch the game on high definition, surround sound, big screen TV, can you blame him?
Posted by Paul K. Ogden at 8:53 PM

The Speedway is one of the worst places to watch a NASCAR race. The fans of NASCAR expect to see the whole track. With the turns not being banked and throw in the stands that block your view and it's not a very good viewing experience. A good friend of mine (and a huge NASCAR fan)predicted that once the novelty wore off the attendance would drop at the Brickyard race. He was 100 percent right!

As for high def TV's I agree that sports fans may just stay at home. Although never under estimate the power of a winning team. If Manning goes down I am sure there will plenty of available tickets for Colts games.

I saw my last "live Colts game about ten years ago. The noise was too great, we were shoe-horned into seats designed for much smaller people, luke-warm beer was overly-priced, and there was a wait at the beer recycling center. I agree w/guy77money, but I will state it differently. Once the Manning era is over, there will be plenty of tickets available. In the meantime, the expense is incredible and the game on TV at home much more pleasant.
Ah! But when will all the games go pay-per-view or to some other variant of subscription? I would not have a problem w/that except: 1) In the instances of the Colts and those NBA Chamption Pacers(and many if not most other franchises), we taxpayers have subsidized the operations and should not have to pay again for the opportunity to watch them play, even when they suck; 2) With pro sports exempt from anti-trust, I have a problem w/them jacking the public. I thought that was why anti-trust legislation first was passed.

According to online reports the first few NASCAR races of 2011 had higher attendance than in 2010.

I'd bet on the economy rather than large TVs as the predominate factor, and the disturbing lack of nude female drivers.

The NASCAR TV ratings are down, too, despite those larger screens.

TV ratings for everything has trended down over the years. Too many other options for people. It's really hard to isolate the effect one factor has...rather I think it is a whole host of factors and one of that is that, as Mark Small notes, the viewing experience at home is much better.

I attended in excess of 40 races at Indy over a 30 year span before I decided it was not fun anymore.

It's a crappy series, with low-tech, slow cars and anti-competitive specs and racing rules. Why are the cars so heavy? Why must they all use the exact same body shape and tires? If you must remove some debris from the track, throw a yellow; order the leader under 100 mph, forbid passing, and send a service truck to remove the debris. When the truck has removed the debris, instruct the nearest corner worker to the leader to throw a green, and so indicate the course-condition lights. The process could take a minute, or two. There is no need for this ridiculous several-lap pit ritual following every yellow.

The fans are boorish. The races are often held in the middle of oppressive heat. The fans are subject to blasphemous prayers and public worship of the military. Attending a public event, post 9/11, is an invitation to have all of your possessions searched. Fighting traffic is unwelcome. Cops are ubiquitous and looking for every reason to arrest you.

In all, it's a bit much to attend a public event, especially a NASCAR race.

Don't think that I'll go to a race if they remove it from television. The only chance they have to gain any of my audience minutes is to have it on television.

Paul, I assume that you were able to see Mayor Marine and his speech at the start of the race.How long will be play the Marine card.

The Brickyard is a bad place to watch any race,its is too big to appreciate the race at all. Go to tracks like Bristol and Talladega and you will see real racing.

The best rating that the INdy 50 get on the past five years was when Danica was throwing a bitchy fit. NASCAR had their best ratings when there are fights among drivers.Ala the #3 glory days. The fact is that people want to see fights,wrecks and blowups with drivers.The race yesterday was Vanilla at best.Next year will be ever worse.

The only good play to watch the race is in the Southwest vista and no one wants to give up those seats. I really don't think that it is the economy .I think that it is a poor product. However, 60% of the NASCAR fans travel 150 miles or more to see a race. With gas prices what they are,people may be staying home.Its a combination of poor product, Big Screen TVs and a crappy place to watch a race.

If you went to Lucas Raceway on Saturday night, it was packed. The race was great and the fans liked it. Indy is a crappy place for a real fan to watch a race

Very interesting feedback on this thread

Yes, Ben, I heard Mayor Marine at the Brickyard. He wouldn't miss the opportunity to get free media prior to an election. At least this time he wasn't using taxpayer money to promote himself.

No, Ben, the Busch race at IRP sucked. NASCAR threw a late caution and allowed a guy who had no business being in the front to win.

NASCAR is welfare racing for a welfare audience.